(Minghui.org) Falun Gong practitioners from Australia gathered in Melbourne on October 11-13, 2019. They held a series of activities to introduce the ancient spiritual practice to the public and to raise awareness of the Chinese Communist Party’s (CCP) persecution of it. 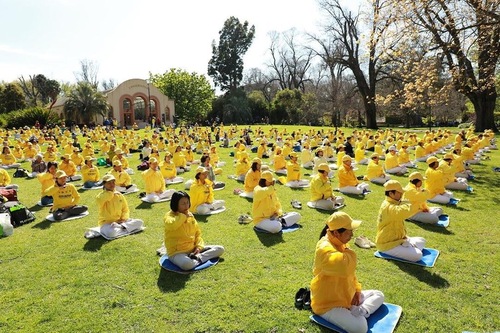 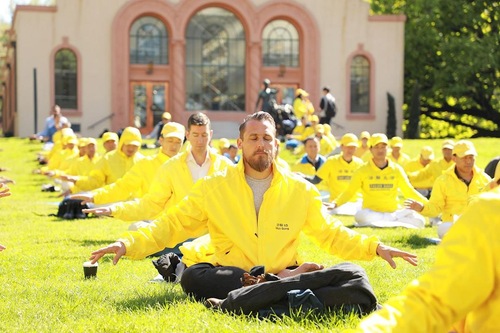 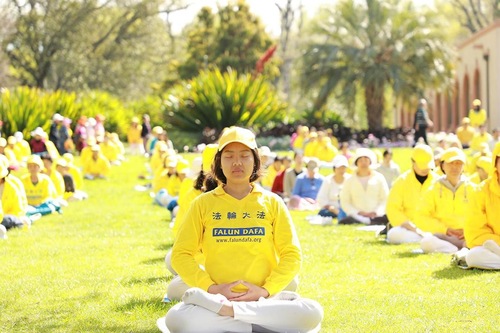 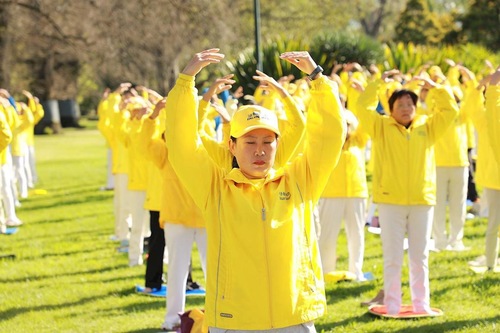 Practitioners demonstrated the exercises at Fitzroy Gardens on the morning of October 12, 2019.

Many practitioners shared their profound experiences from practicing Falun Gong.
“So marvelous,” exclaimed Wan Zhen. She said that she told her family and friends about Falun Gong, and eight months after she began practicing, her mother, husband, and two daughters also started practicing upon seeing her positive changes.

Wan Zhen said, “I was sick since childhood. I was diagnosed with hepatitis when I was five years old. I'm a designer so I often worked long hours and stayed up late. I eventually came down with chronic pharyngitis, tonsillitis, insomnia, arrhythmia, long-term tinnitus, and palpitations.

“In order to regain my health, I visited doctors for more than ten years. I also learned a lot of Chinese medicine theories and tried many ways to become healthy. Yet, my health got worse.

“What really worried me was when my oldest daughter developed eczema. She itched for more than two years. My second daughter was born prematurely and weighed only three pounds. She was even too weak to cry. She often had fever, coughs, asthma, and pneumonia. I often took her to hospitals.

She said, “At the end of 2017, I was fortunate to meet a kind doctor who gave me a USB flash drive with information about Falun Gong.

“I watched the video of the parade of nearly 10,000 Falun Gong practitioners in New York City in 2015. I was amazed at how widely Falun Gong was practiced outside of China.

“During the next ten days, I carefully read the information about Falun Gong. I realized that I had been misled by the Chinese Communist Party's (CCP’s) propaganda to defame Falun Gong. I dodged practitioners when I traveled abroad. It's such a pity that I didn't talk to them!”

Wan Zhen was very grateful to the doctor for letting her know the truth about Falun Gong. She said, “I told the doctor that I wanted to learn to practice Falun Gong. He gave me a DVD with a video of Master Li’s (the founder) teachings and then I uploaded the book Zhuan Falun to my mobile phone.”

“I began to practice the exercises every day and behave according to the principles of Truthfulness, Compassion, and Forbearance. Within ten days, my health had returned normal. My husband witnessed this and was so amazed that he also started practicing Falun Gong.

“My mother is 80 years old. She is an educated person. Because she is old, she often had constipation, chronic colitis, and insomnia. She took Chinese medicine for years. I suggested she read Zhuan Falun. After she read it, she started to practice and her health has improved ever since.”

“A month after I began practicing Falun Gong in early 2018, my husband, our younger daughter, and I went to Australia to visit my son. We found a group practice site near the hotel where we stayed.

“We noticed a couple of Westerners and their young son were practicing there, so my husband and I joined them the next day. My daughter had a cough and did not know how to do the exercises but came with us.

“She squatted on the ground and coughed. After we returned to the hotel, she basically recovered. On the third day, we were excited to attend the Shen Yun Performing Arts show in Sydney.

“After returning to China, my daughter kept on practicing and had no relapse in her illness. My elder daughter saw how quickly her sister recovered, so she also started practicing Falun Gong. Her eczema disappeared soon afterward.

"My father was misled by the CCP’s propaganda and strongly opposed my practicing. But after seeing the miraculous changes in his two granddaughters, his doubt and opposition turned to belief. He is now reading Zhuan Falun and agrees with Dafa.”

Wan Zhen’s son had learned about the CCP’s persecution of Falun Gong while he was in Australia. He is very supportive of his parents and his two sisters practicing. He has already read Zhuan Falun twice.

Wan Zhen’s husband said, “In 2017, we applied to immigrate to Australia. We did not come right away because my wife and daughter were not well. After practicing Falun Gong, they regained their health. Our family has now moved to Australia.”

Wan Zhen is very grateful to Master Li and Dafa that her whole family now practices Falun Gong and is happy!

“Positive Changes for a Tough Guy with a Hot Temper”