(Minghui.org) The Tian Guo Marching Band from Toronto was invited to participate in the Kitchener-Waterloo Oktoberfest Thanksgiving Day parade on October 14, 2019.

One of the largest Thanksgiving Day parades in Canada, the event drew in over 200,000 spectators and was broadcast by CTV and a number of local radio stations. According to organizers, there were more participants and viewers than in previous years.

The Tian Guo Marching Band appeared as the finale this time and received warm applause. Many along the parade route said the band's participation has become an annual must-see. 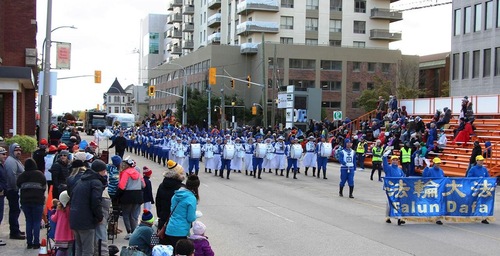 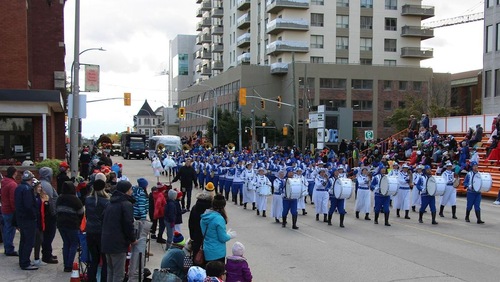 Gao, who recently arrived in Canada, said excitedly, “This is the first time I've seen a band composed of so many Chinese people. It's so great to see the band's performance!”

Gao said that she knew about Falun Gong and read The Epoch Times. She admired the band members' orderly movements, their blue and white uniforms, and their peaceful and pure performance. Gao said that she could feel the band’s energy and grace.

“Seeing the band perform today, I am more convinced that Falun Gong is great,” said Gao with tears in her eyes. 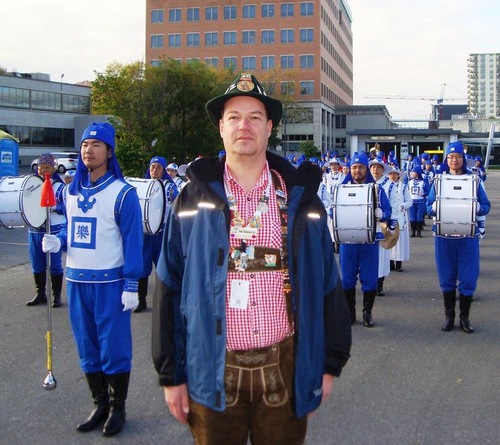 Keith Stokie, one of the parade organizers, welcomes the band.

Keith Stokie, one of the parade organizers, said, “We've invited the band to participate in the parade for several years. I welcome them very much. I have seen their performances. They are great!”

When he learned that the band members were Falun Gong practitioners, he said he knew it was being persecuted by the Chinese Communist Party’s (CCP) and encouraged practitioners to let more people know. 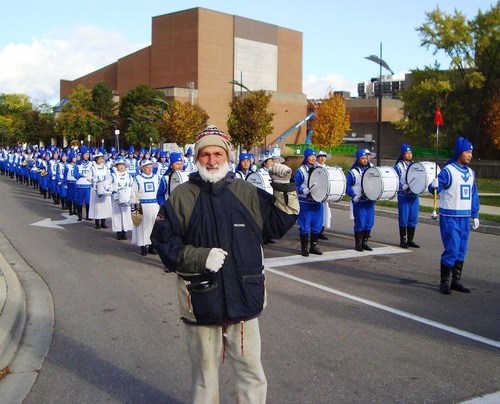 Local resident Frank CJ waited at the beginning of the parade route early in the morning. He said, “I really like the performance of the band. They are neatly organized. I saw the band before in previous parades.”

When the band played, Frank gave the members a thumbs-up.

Vietnamese Resident: The CCP is Afraid of Falun Gong

Mai from Vietnam recorded video of some of the band’s rehearsal. He said, “This is my first time to hear the band. I like it very much.”

He also said, “I know the CCP has carried out live organ harvesting from this group of people [Falun Gong practitioners] to make huge profits. I can’t understand how the CCP can do this. Everyone is a human being, and they are all Chinese. Why does the CCP kills its own citizens?!”

Mai also said that he knew why the Party persecutes Falun Gong: “Because the CCP is afraid of Falun Gong! Many people practice Falun Gong, and practitioners are very positive. The CCP is very afraid of groups that are bigger than itself.”

“Changing Myself Led to My Son Overcoming His Internet Addiction”