(Minghui.org) With his father still incarcerated for refusing to give up his faith in Falun Gong, Ms. Liu Yanwei's son was dealt another blow when his mother was also arrested for the same reason on October 1, 2019.

On a break from college, Ms. Liu's son met with her briefly in Fujin City on the morning of October 1 before going to Tongjiang to visit his grandparents. They have all been mourning the detention of his father, Mr. Zhang Baochun.

Mr. Zhang was arrested on August 1, 2019, and has been held in Tongjiang City Detention Center ever since. All visits have been denied.

When Ms. Liu's son returned to Fujin later that day, she wasn't there. He waited at her temporary residence for the rest of his week of vacation, hoping Ms. Liu would show up. Not until he was about to board the train to go back to school did an acquaintance tell him that his mother had been arrested around 4:30 p.m. on October 1.

Two weeks have now passed with no word from the police about where Ms. Liu is being held. 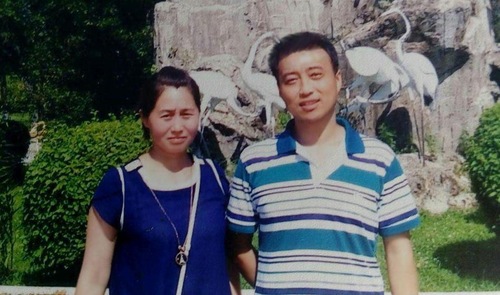 This wasn't the first time the couple has been targeted for their faith in Falun Gong, which they credit for renewing their lives. They were sentenced to prison ten months apart in 2008, Mr. Zhang to six years and Ms. Liu to seven and a half years. They survived unimaginable torture for upholding their faith and returned home heartbroken.

More details about the plight of the family can be found in the letter Ms. Liu wrote to the police chief in Tongjiang while seeking the release of her husband below.

Many people in Tongjiang know that my husband and I practice Falun Gong. But not many know why.

Before I took up Falun Gong, I used to suffer from severe edema caused by a kidney problem. I was very weak. I couldn't take my son to any after-school activities or classes, just to the hospital for me to get medicine or an injection.

To make things worse, my husband was addicted to gambling and didn't care about us. We often fought, and sometimes he beat me. My life was just miserable at that time.

In 2004, I was introduced to Falun Gong, which completely changed my life. I recovered my health in a very short period of time. I was full of energy. My body was so light and my heart was filled with joy.

After seeing my changes, my husband also began to practice Falun Gong. He quit gambling and no longer beat me. Peace reigned in our family.

I thought that, when they saw how we’d changed, my parents-in-law would support us in our faith. I also wanted to introduce the practice to them so that they could benefit from it as well. But to my surprise, they were very resistant because of the communist regime’s propaganda demonizing Falun Gong and didn't approve.

When we visited them during the 2005 Chinese New Year, my father-in-law began to blame my husband for learning Falun Gong. He got more and more angry and even picked up something to hit me with. He told my brother-in-law to stand at the door to keep me from running away. Only after my husband stopped him was I able to leave.

If I hadn't learned Falun Gong, I would never have visited them again. But now I lived by Truthfulness, Compassion, and Forbearance. I understood that they were just misinformed and deceived by the government.

But because of this incident, I developed a strong desire to let more people know the facts about Falun Gong and why the communist regime was persecuting it and fabricating lies to deceive the public.

Because of our efforts to raise awareness about the persecution, however, my husband and I were both targeted by the government. We were arrested and had our home ransacked several times.

I was forced to live away from home in 2007 after my husband was arrested. The police ransacked our home and confiscated our computers and Falun Gong books and materials. The financial loss was devastating.

I sent my son, who was only 9 years old, to live with his grandparents. The police harassed and threatened him at his school and attempted to force him to tell them about us. He was terrified.

When I returned home to get something, my son, who had turned 10, said, “Mom, I miss you so much! But please don't come back anymore. They are still looking for you. You should take care of yourself when you are outside. When it snows in the winter, make sure you keep warm and find shelter.”

Looking at my son, I couldn't hold back my tears.

I was arrested on May 4, 2008, and later sentenced to seven and a half years in prison, which was only ten months after my husband was given six years.

We practice Falun Gong and strive to be good. We constantly reflect on our own behavior. I never expected that it would land me in jail one day.

When the guards in the detention center attempted to take my photo, I refused to cooperate. They beat me with a whip.

My first day in Heilongjiang Province Women's Prison, the guards ordered the inmates to tape me from head to toe. I struggled to breathe. They woke me up at 5:30 a.m. the next day and forced me to sit on a tiny stool without moving until 12 p.m. My buttocks festered.

When I protested, the inmates taped me again. When I shouted, “Falun Dafa is good!” they stuffed my mouth with old socks. To prevent others from hearing what they were doing to me, they turned up the TV as loud as it would go.

After surviving years of torture, I finally returned home at the end of 2015.

My husband was also tortured in prison. He was force-fed, frequently beaten, and hung up by his wrists. The guards also attempted to force him to write statements renouncing Falun Gong.

Just like many other Falun Gong practitioners, what we've gone through is hard to describe and imagine. I would never have survived without the strength provided by my faith.

Now my husband has been arrested again. I worry about him being tortured. But I also worry about the perpetrators and what will happen to them when they are one day held responsible for the crimes they've committed.

“People Around Me Speak Out for Falun Gong Amid CCP Propaganda”