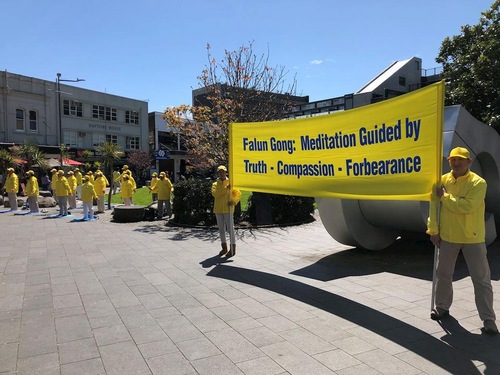 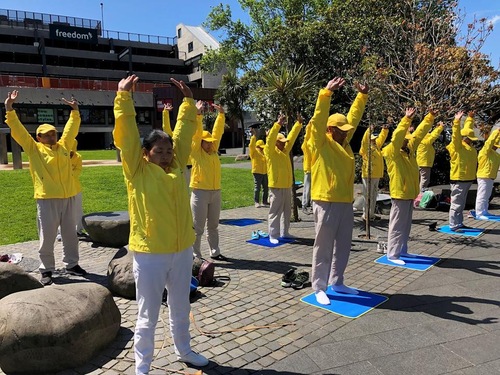 Practitioners demonstrate the exercises at Newmarket Commercial Street in Auckland on Saturday, October 12, 2019. 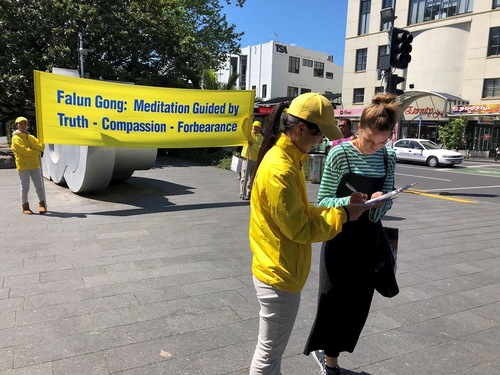 Several people signed a petition which condemns the persecution of Falun Dafa in China.

Many people were attracted by the serene music as practitioners did the exercises together. Some drivers honked in greeting as they drove by while others gave practitioners a thumbs up. People were shocked when they learned that the Chinese Communist Party (CCP) has been persecuting Falun Dafa practitioners for over 20 years. They signed a petition to condemn the persecution and encouraged practitioners to continue exposing the atrocities in China.

A Chinese woman came by to learn the facts about Falun Dafa. She said she couldn't understand why the CCP is persecuting Dafa and what was wrong with believing in Dafa's principles of Truthfulness-Compassion-Forbearance. She said that after she left China, she often watched programs broadcast by New Tang Dynasty Television and thought that those programs made sense. She believes that harvesting organs from living practitioners is something the CCP would do since it's so wicked. Referring to the toxic substances some Chinese manufacturers added to infant formula, she said, “Just look at today's China: 'poison' is everywhere; water, vegetables and fruits don't taste like they should taste.” 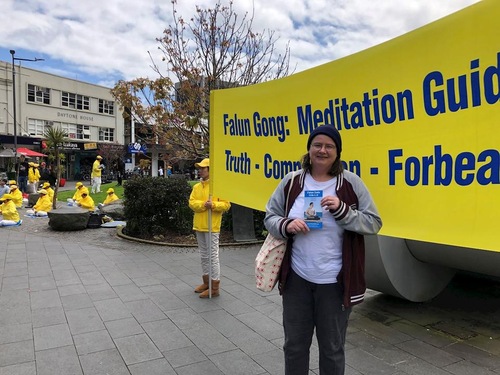 Megan is a market researcher. She indicated that she'd heard about the forced organ from living practitioners and said, “This is really terrifying! People get organs but at the cost of another person's life. This is unbelievable!” She added that when some people are confronted with the truth they are not willing to accept it. Megan wished to help end the organ harvesting crimes and said, “I can try to do something about it. For example, I can inform my parliamentary member or spread the facts through social media.” 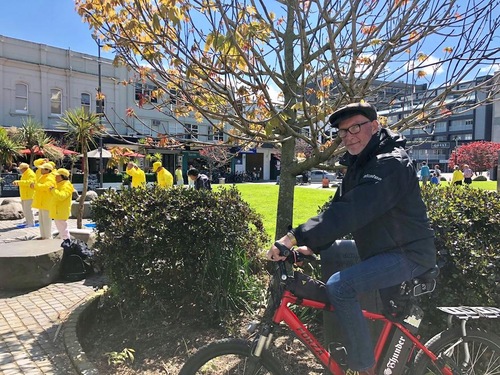 Sid said the world needs Truthfulness-Compassion-Forbearance. He hopes New Zealand's government will warn citizens not to go to China for transplant surgeries.

Sid was out riding his bicycle and stopped to watch practitioners doing the exercises. He said, “It's great to see practitioners practicing here. I hope people support them and learn Falun Dafa.” He said that the world needs values like Truthfulness-Compassion-Forbearance. When he learned about how practitioners are being persecuted in China, Sid said that he hopes more people will understand what Falun Dafa is and learn the facts about the CCP taking organs from living practitioners. He pointed out that New Zealand's government should call on its citizens not to go to China for organ transplant surgeries.