(Minghui.org) Twelve residents in the Dongzhou District of Fushun City were arrested in one day more than two years ago, for their faith in Falun Gong. Eleven of them were sentenced to prison in December 2018; the remaining practitioner is awaiting a verdict following a hearing.

Judge Tian Hao from the Dongzhou District Court held two pretrial meetings with the practitioners’ lawyers on April 25 and June 8, 2017. Instead of proceeding with the joint trial, he split the case into individual cases and assigned them to nearby courts, including Wanghua District Court, Qingyuan County Court, and Fushun County Court.

The 12 practitioners appeared in court between September and November 2018. Eleven of them were sentenced to prison in early December, and Ms. Xu Guirong is still awaiting a verdict after a hearing on September 10, 2018, in the Wanghua District Court.

Dong Weirong and Jiang Shun'ai have been released after serving their time, while the other ten remain in Nangou Detention Center.

Below are details of their cases: 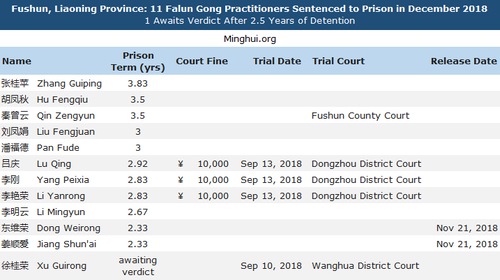 Fushun Police Bring Charges Against 12 Practitioners for the Third Time

Fushun, Liaoning Province: 29 Arrested for Their Faith in One Month, 22 Still in Detention

“Australia: “Truthfulness-Compassion-Forbearance Is Hope for Mankind””