(Minghui.org) One year after the mass arrests of Falun Gong practitioners in Tianjin on December 28, 2017, three of the practitioners have been sentenced to prison for not giving up their faith. Five more are awaiting verdicts after court hearings, and six are facing indictment after their arrests were approved by the procuratorate.

Because of a strict information blockade, details about the arrests weren't readily available when Minghui.org first reported on it one year ago. After a more thorough investigation, the number of arrested practitioners has been updated from the original 24 to 37, with 5 additional practitioners found to have been harassed on the day of the mass arrest.

The case status of 6 of the arrested practitioners remains to be investigated.

All the practitioners had their homes ransacked and Falun Gong-related items and personal valuables confiscated. During the arrest of Ms. Gao Jianling, police confiscated 17,500 yuan in cash and two bank deposit receipts for a total of 25,000 yuan.

Ms. Jin Zhi was sentenced to three years by Beichen District Court in late September 2018. She was taken to Tianjin Women's Prison to serve her time.

Ms. Xu Xueli was tried by Hongqiao Court on November 9, 2018. Her mother, Ms. Shu Yufen, was blocked outside of the courthouse. Her father, a cancer patient, saw his health quickly decline upon his daughter's arrest; he passed away in March 2018.

This was the second time Ms. Xu was targeted for her faith in Falun Gong. She was previously imprisoned for eight years and fired from her workplace. Unable to bear the pressure from the persecution, her husband divorced her in 2011.

When Ms. Xu was released from the prison in 2013, she suffered from severe health problems, was constantly tense, and felt frightened every day.

She gradually recovered after she resumed practicing Falun Gong, only to be targeted again a few years later for her faith. She is currently awaiting verdict in detention.

After Ms. He Guirong was indicted, a staff member from the procuratorate went to see her in the detention center and said that they would release her if she pleaded guilty. She declined the offer and maintained that she was innocent and that practicing Falun Gong was not a crime.

The presiding judge also talked to her after her case was assigned to Hebei District Court and ordered her to accept the court-appointed lawyer, who would enter a guilty plea on her behalf. She refused to comply and said she would defend herself even if she didn't have a lawyer.

Ms. He had two court hearings in four months, first in July and then in October 2018.When she testified how practicing Falun Gong improved her health and character, the judge stopped her and said that her better health was a result of her improved living conditions under the leadership of the Chinese Communist Party.

Dentist Li Yongquan was arrested while working at his clinic. The police didn't inform his elderly parents (in their 90s) of his arrest until one month later. Both of them were traumatized upon learning about his ordeal. His mother lost her hearing, and his father suffered a heart problem and needed a pacemaker to control his abnormal heartbeat.

When his lawyer visited him at the detention center, Mr. Li was wheeled out by the guards. He was unable to move the right side of his body and could only use his left hand to sign papers.

Mr. Li told his lawyer that the police put him in a chokehold during interrogation at the police station; after he lost consciousness, they left him lying on the concrete floor that night during the freezing winter. Upon waking up in the morning, he found himself unable to move his right arm.

He began to experience chest pain and coughed up blood. Even though the doctor found symptoms of a stroke in him and some shadows in scans of his lungs, the police refused to provide medical treatment for him and allowed his condition to deteriorate. His lawyer's repeated requests for medical parole were also turned down by the police.

Ms. Gao Jianling began a hunger strike to protest the arbitrary detention after her arrest. The guards at Wuqing District Detention Center began to force-feed her on the fifth day and sprayed her with pepper water.

She experienced discomfort in her internal organs after more than 20 days on hunger strike, and she began to take in small amounts of food. She remains emaciated and weak, and the guards forced her to wear heavy shackles for more than 20 days.

She was tried by Wuqing District Court on November 15, 2018.

Ms. Wang Jiahua, 56, has had her salary withheld by the officials since her arrest. Her family is not allowed to visit her, and they still don't know her whereabouts at the time of writing.

Ms. Dong Xuemei was arrested on the early morning of December 28, 2017 at her daughter's home. Her husband and two sisters were also arrested on the same day but were released hours later. Ms. Dong remained in custody and is now facing indictment after the procuratorate approved her arrest.

Two practitioners surnamed Zhao and Guo, 75 and 73, respectively, were also arrested and harassed. The police cut off the electricity to Ms. Zhao's home and arrested her when she went out to check her electrical panel. 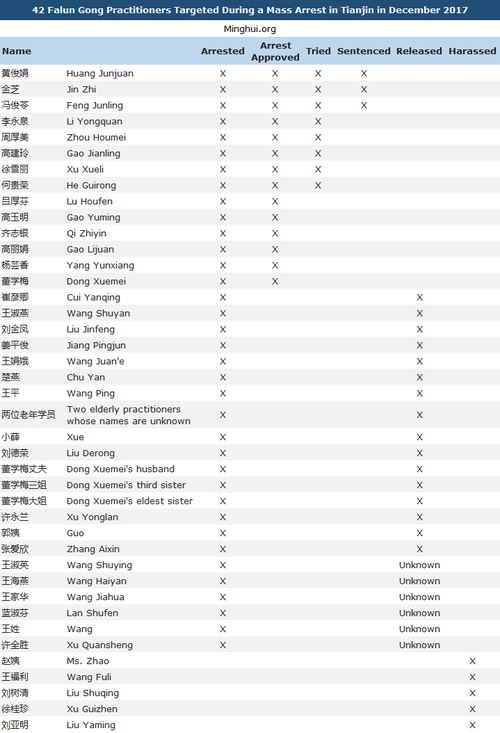 Tianjin Woman Sentenced to 7.5 Years for Distributing Flyers about Her Faith