(Minghui.org) Almedalen Week, also known as Politician's Week – Sweden's most important annual political forum – was held on the Island of Gotland from July 1 through July 8. As visitors and local citizens got to meet and mingle with local and national politicians, they also came across Falun Gong practitioners demonstrating the meditative exercises and raising awareness of the persecution of Falun Gong (also called Falun Dafa) in China. 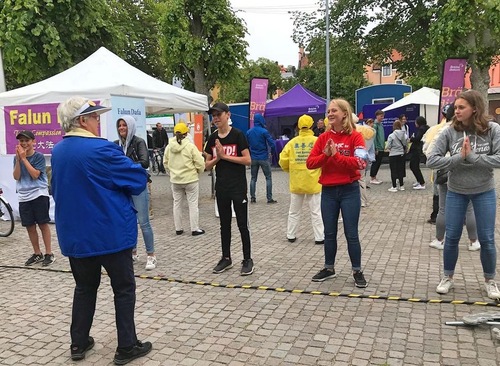 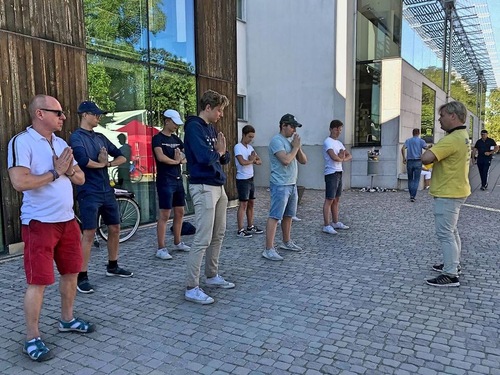 Falun Gong practitioners have been a presence at Almedalen Week for several years. They displayed banners introducing the practice and also demonstrated and taught the exercises to interested people. As in previous years, the Falun Gong tent was a popular stop for visitors ranging in age from several years to over 70. This year's biggest group were young people between the ages of 10 and 30. They stopped by in groups and wanted to learn the exercises right away. 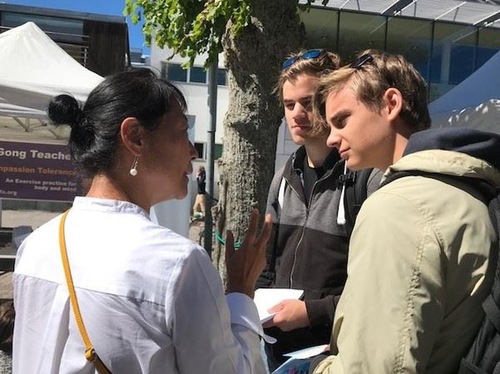 Brothers Jsak (center) and Joel (right) learn about Falun Gong from a practitioner.

Jsak, 20, studies at a medical school. His younger brother Joel is a high school student. They said they came to the Falun Gong tent because of the peaceful and harmonious atmosphere they felt there. They listened attentively as a Falun Gong practitioner introduced the practice to them.

Jsak took notes during the conversation. He told the practitioner that he was very aware of all the chaos in the world and wanted to try meditation to cleanse his mind. As he learned more about Falun Gong, he realized that the practice had more to offer beyond meditation, his immediate goal. 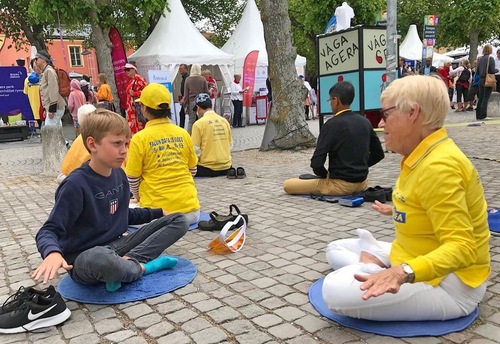 This nine-year-old came by to learn the Falun Gong exercises two days in a row.

A nine-year-old boy came to learn the Falun Gong exercises two days in a row. His mother also had the opportunity to chat with Falun Gong practitioners to learn more about the practice. 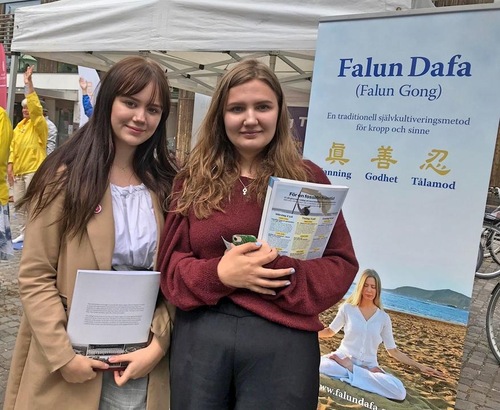 Juliet and her friend have their picture taken in front of the Falun Gong tent.

Studying the Chinese language has piqued Juliet's interest in Chinese traditional culture, including music. So she also wanted to learn the Falun Gong exercises, and stopped by the Falun Gong tent with her friend. She shared her background in the Chinese language with practitioners. Practitioners offered Juliet and her friend a set of Falun Gong materials and the website address where they could download all of the exercise instructions for free. 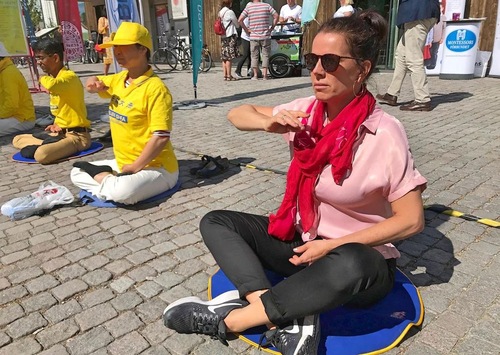 Nine Ordin tries out the fifth exercise, the sitting meditation.

Nine Ordin, 48, has been interested in the human body and spiritual beliefs. She said that she had been searching for a way to connect the body, the mind, and the world with nature. She observed the activities at the Falun Gong tent for quite some time before approaching a practitioner. Nine shared that she noticed the peaceful and strong energy field near the tent. She had tried meditation before, but not Falun Gong. Her younger brother had lived in China for many years, so she had heard of the persecution of Falun Gong in China.

“I'm going to practice Falun Gong!” Nine declared after speaking with a practitioner.

“The People of Michigan Resonate to “The World Needs Truthfulness, Compassion, Tolerance””