(Minghui.org) Falun Gong practitioners held a candlelight vigil in front of the Chinese consulate in Melbourne on July 20, despite freezing cold. The intermittent cold rain during the day made the night wind biting. The attendees included practitioners in all age groups, including toddlers, teens, and octogenarians.

The silent candle light reminded everyone in the neighborhood that the persecution in China has been ongoing for 19 years and people have lost their lives as a result of standing up for their beliefs. 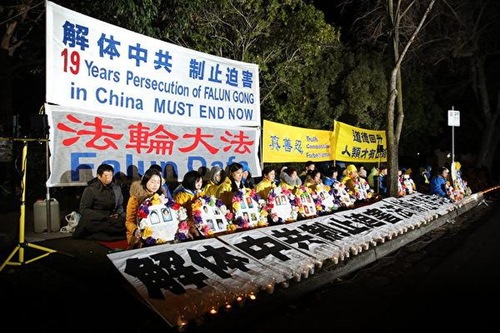 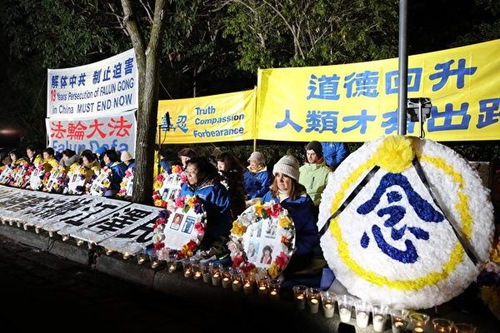 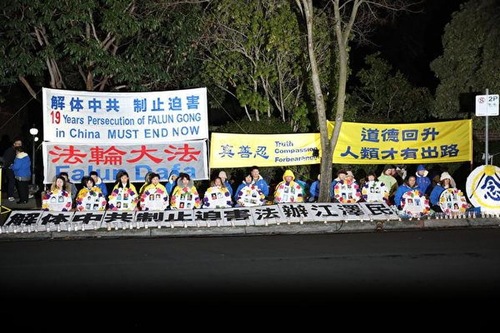 Falun Gong practitioners in Melbourne, Australia held a candlelight vigil in front of the Chinese consulate on July 20 to commemorate those who lost their lives in the persecution in China.

Mr. Wang, a media professional, said, “We have come to the Chinese consulate to protest during July 20 every year. We would like to tell everyone who passes by and people inside the Chinese consulate, and all in the world, that the persecution should have ended long ago. Yet it is still going on.”

He said he knew the benefits of Falun Gong from his own experience of cultivating for ten years, “I think it's remarkable – Falun Gong practitioners' journey of resisting the persecution peacefully. Practitioners have never wavered in our beliefs. We follow Mr. Li Hongzhi, the founder of Falun Gong, on a righteous path. We have also seen that more and more people have learned the facts and know the crimes the Chinese Communist Party has committed.”

Technician: Persisting in Clarifying the Facts

Dean is an appliance technician. He said, “We are here to clarify the facts and tell people what's going on in China. We expose the evil of the CCP. Whoever learns about the fact that over 100 million Falun Gong practitioners have been persecuted for 19 years will be outraged.”

“Nineteen years of persistence also shows me hope. I see that from government to the public, Australians have seen the evil of the CCP more clearly. Falun Gong is the only group that has persisted in resisting the persecution and can never be bought. I'm very proud of being a member of it.”

Dean said that in the past he had taken medicine since before he could remember. He joked about the hospital being his second home, until he took up the Falun Gong practice at the age of over 40. He is now illness free. “What's more important is that I have found the meaning of my life through 15 years of cultivation.”

New Practitioner: It is Great to be a Good Person

Luk Le, 15 years old, began practicing just four months ago. He held banners on the sidewalk with the adults from the beginning to the end of the event. He said, “I like doing the exercises and reading Zhuan Falun with adults. I feel lighter and I don't catch cold anymore. I was a cynic and often made fun of others, but I can now control my emotions and can calm down.”

“My biggest change is to have turned into a good person. I reach out to help others and don't hurt others with my remarks or deeds. My classmates and teachers have seen my changes. My family supports my practice. My 10-year-old younger brother has started practicing too.”

Grace, a 21-year-old college student, left China not long ago. The vigil was her first. She said, “It is so solemn. I am very sad to see the pictures of so many who died due to the persecution. I hope to do what I can to end the persecution soon.”

“I am very fortunate to have come to a free country like Australia. I can freely express my pursuits and protest in front of the Chinese consulate. I was often afraid when distributing Falun Gong materials with my mother in China. Now I feel that I'm responsible for urging more to end the persecution together. It is worthwhile despite of the hardship of the weather.”

“Group Exercises in Berlin Call for Ending Persecution in China”