Mother Tortured to Death, Father Arrested for Exposing Persecution of Their Faith

(Minghui.org) It was a hard choice for Ms. Zhang Hongyu. Four years ago she decided to come to the United States, and that meant she had to leave her father alone in China.

Her mother, Ms. Xiu Jinqiu, was tortured to death a year before, only three months after her arrest for practicing Falun Gong, a spiritual discipline persecuted by the Chinese Communist Party.

The police kept harassing Ms. Zhang and her father, Mr. Zhang Ming, following her mother's death. Ms. Zhang's wish to go abroad grew ever stronger. She wanted to expose her family's persecution to the international society and help stop the persecution of millions of families like hers. 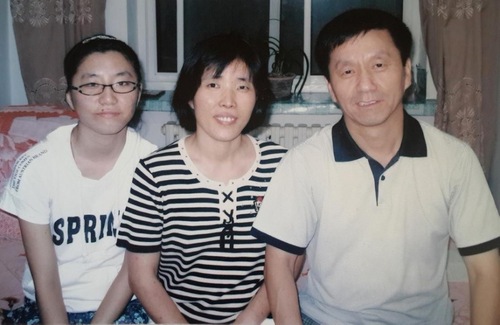 Ms. Zhang Hongyu and her parents

Once she left and started a new life in a foreign county, time went by unbelievably fast. She was fulfilling her deeply-held mission, but Ms. Zhang never stopped worrying about her father.

Her heart sank when she heard that her father was arrested on June 29, 2018. He and another Falun Gong practitioner, Mr. Li Quanchen, were seized by the police while distributing literature to expose the persecution.

The police ransacked Mr. Zhang's apartment and confiscated all of his home-made pamphlets, as well as the computer and printer he used to make them. They detained Mr. Zhang at Kuandian Detention Center in Dandong City and didn't allow anyone to visit him.

“The detention centers and prisons in China are very evil places. Many Falun Gong practitioners suffer unimaginable torture there. Some are tortured to death,” said Ms. Zhang.

With the memory of the tortures that killed her mother five years ago still vivid in her mind, Ms. Zhang knew too well what could happen to her father in the detention center.

“It's especially concerning that the detention center denies family visitation for my father. None of us know how he is doing right now. He might be facing life-threatening danger every minute. I'm very worried for him,” she said.

Now she is doing everything she can to rescue her father.

“My father is a very kind person. He used to work at a bank. Practicing Falun Gong helped him to maintain integrity and honesty at work, despite influence by the corrupted society,” Ms. Zhang recalled. “When the persecution was suddenly launched in 1999 and vicious propaganda attacking Falun Gong was broadcast on the central TV station non-stop, it broke our hearts.”

In 2000, one year after the persecution began, Mr. Zhang demonstrated at Tiananmen Square for Falun Gong, hoping to let more people know the facts about the practice. He was arrested, sentenced to three years of forced labor, and subjected to many tortures.

That was only the beginning of the family's pain and anguish.

Having lost her mother in the persecution, Ms. Zhang is desperate to rescue her father. She calls upon the international society to pay attention to her father's case and pressure the authorities to release him and all the other illegally detained Falun Gong practitioners. 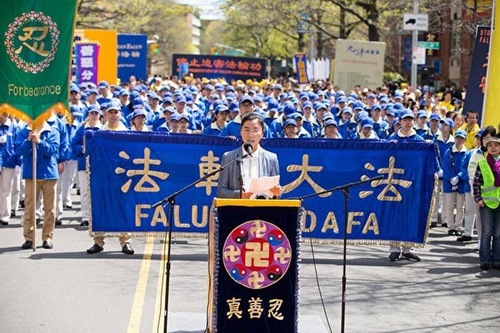 Ms. Zhang speaking at a Falun Gong rally in New York on April 25, 2017 about her mother's tragic death 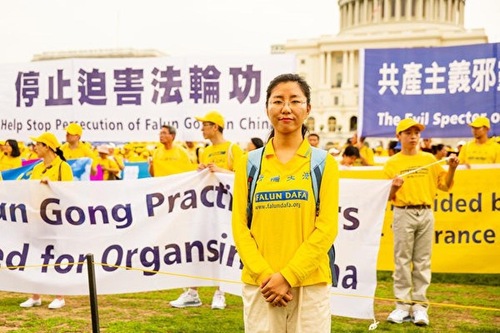 “Be Alert to the CCP's Monitoring Tactics”