Ms. Xiu Jinqiu handed a Falun Gong pamphlet to a female officer in the Linjiang Community, Dandong City, on September 5, 2013. This officer reported her, and Ms. Xiu was arrested and tortured. She was released and left her home to avoid being arrested again. She, her husband, and their daughter were arrested on September 9. Her health deteriorated after that. She lost consciousness on November 16 and passed away on November 28 at the age of 52.

Interrogated and Tortured at the Police Station

When Ms. Xiu was arrested on September 5, 2013, she was taken to the Linjiang Police Station and interrogated for three hours. She refused to answer any questions and didn't give her home address and phone number. The officers cuffed her hands and legs to an iron chair and locked her in a room. Her feet and legs swelled up. One young officer stomped on her toes. Ms. Xiu's toenails turned black and blue and the nail on her right big toe fell off. 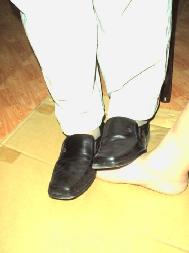 The officers reported Ms. Xiu to the Domestic Security Division of the Dandong City Police Department. Chief Du went to the Linjiang Police Station to interrogate her. He wanted to search her home and pretended that they would release her. He asked her to call her family to pick her up.

Her daughter was busy at work, so she called her father, allowing the police to obtain the phone numbers of Ms. Xiu's husband and daughter, and from there, her home address.

The police took her home. Ms. Xiu was so weak that two officers had to carry her upstairs. The police ransacked her home but did not find anything that would incriminate her, which made them angry. They tried to take Ms. Xiu to a hospital for a physical before taking her to a detention center, but her family stopped them.

Ms. Xiu left home immediately after the officers left. Deputy head Wu and three officers arrived at her home 10 minutes later to arrest her, but she had already left at that point.

Chief Du and three officers went to Mr. Zhang's workplace on September 9, 2013 and arrested him. They then went to the daughter's place of employment and arrested her, too.

Ms. Xiu was arrested again and taken to the Linjiang Police Station. The police cuffed her to the iron chair and interrogated her. Ms. Xiu refused to answer their questions. Her husband was also cuffed to an iron chair.

Ms. Xiu was taken to the Zhenxing District Hospital for a physical and diagnosed with high blood pressure. She was swollen all over and had spasms. The doctor warned the officers that Ms. Xiu was in critical condition and that no detention facility would admit her.

The police took Ms. Xiu to the Dandong Detention Center despite the doctor's warning. The detention center refused to admit her, and the officers had to take her back to the Linjiang Police Station.

Ms. Xiu was very weak and urinated in the police car as she was incontinent at that point. The police released her, her husband, and their daughter that night.

Ms. Xiu went into a coma on November 16, 2013, and was taken to the Dandong People's Hospital. She was diagnosed with diabetic ketoacidosis, hypokalemia, diabetes, peripheral neuropathy, and several complications related to diabetes. The doctor said that there was nothing he could do for her.

Sentenced to One Year of Forced Labor

Ms. Xiu started practicing Falun Gong in 1998. She and another practitioner were reported and arrested for speaking with people about the persecution of Falun Gong on November 28, 2004. Ms. Xiu was beaten. The two practitioners were transferred to the Qianyang Police Department, and Ms. Xiu escaped that night. The other practitioner was sentenced to two years of forced labor.

Ms. Xiu had to leave home to avoid being persecuted further. She moved to Dandong City.

Ms. Xiu was reported for speaking with students about Falun Gong at Jintang Elementary School on October 17, 2007. She was arrested by officers from the Guangji Police Station. Director Wang slapped her. She was taken to the Dandong Detention Center the next day and sentenced to one year of forced labor.

She was transferred to Masanjia Forced Labor Camp. She came down with diabetes, ketoacidosis, and hemangioma and was taken to the Shenyang University Medical Center. The camp authorities agreed to release Ms. Xiu on medical parole. She returned home on February 10, 2008.

She resumed practicing Falun Gong and her health recovered in a short time.

She was arrested again during the 2008 Beijing Olympics and released the next day.

Ms. Xiu's husband, Mr. Zhang Ming, was employed at the Donggang Branch of the Bank of China. He started practicing Falun Gong in 1996.

Mr. Zhang went to Beijing in December 2000 to appeal for the right to practice Falun Gong. He was arrested and sentenced to three years of forced labor. He was taken to the Dandong Forced Labor Camp.

Parents Died as a Result of the Persecution

Ms. Xiu's father was frightened when the persecution of Falun Gong started in July 1999, and he gave up the practice. His illness recurred and he died on October 30, 1999.

Ms. Xiu's mother was constantly harassed by police officers and the staff from the residential committee. She lost her eyesight and her illnesses recurred. She died on May 31, 2012.