Vigils and Protests Across the U.S. Commemorate April 25 Peaceful Protest in Beijing

(Minghui.org) April 25th is a special day for Falun Gong practitioners. Eighteen years ago, about 10,000 practitioners voluntarily gathered in Beijing and appealed for the release of dozens of practitioners who had been illegally arrested for their belief in Truthfulness-Compassion-Forbearance.

Media reports inside and outside of China praised the event as one of the largest and most peaceful gatherings in recent Chinese history. However, three months later the communist regime launched the persecution of practitioners of the spiritual discipline.

At the 18th anniversary, practitioners around the world have commemorated this event, and are raising awareness of the long and brutal suppression.

San Francisco practitioners held a candlelight vigil in front of the Chinese Consulate on the evening on April 24. They called upon the Chinese regime to end the 18-year-long persecution immediately. 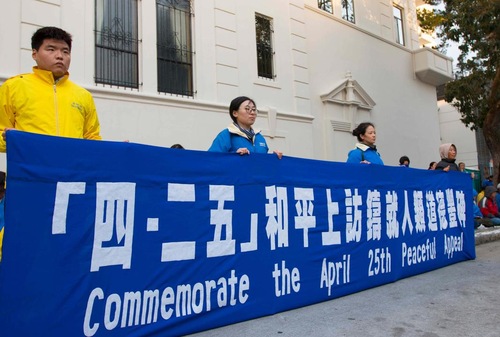 In front of the Chinese Consulate, Falun Gong practitioners commemorate the peaceful protest 18 years ago on April 25. 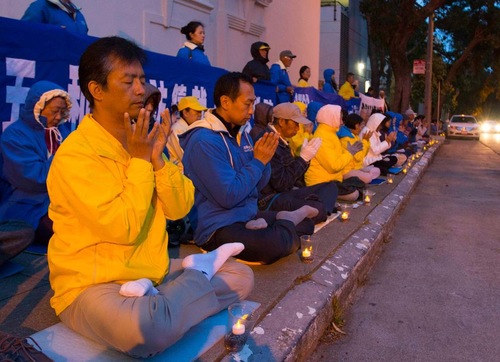 Candlelight vigil memorializes the practitioners in China who lost their lives in the persecution.

Mr. Xu Duo has practiced Falun Gong since 1997. He quit smoking and drinking and regained his health after he began practicing. He was arrested in 2015 for suing former Chinese leader Jiang Zemin for launching the persecution and causing his suffering for nearly two decades. As a result he was force-fed and tortured in a detention center.

Mr. Liu Xuemin, who just came to the U.S., was tortured in a detention center in China for 18 months because he remained steadfast in his belief. He was at the protest to fight for the freedom of practitioners who are still incarcerated for their faith in China.

Residents and tourists, after understanding what the protest was about, chose to show their support for the practitioners’ efforts. This wasn’t the first time local resident Mr. Robert Levering saw the practitioners peacefully protest. He described the persecution as an act of terror.

Iris Perla chose to join the practitioners that day in front of the Chinese Consulate and protest against the persecution. She read about the persecution in the newspaper, and knew how the Chinese regime profits from harvesting organs from living practitioners for organ transplants. She said, “When I learned about the organ harvesting atrocity, I cried. I didn’t know what to do. The U.S. government should ban traveling to China for organ transplants. I ask for the immediate release of the practitioners incarcerated in China.”

Practitioners held a rally on April 23 on Kissena Blvd. outside of Queens Library in Flushing, New York. They called for all just people of the world to stand up against the brutal persecution in China and fight for human rights. 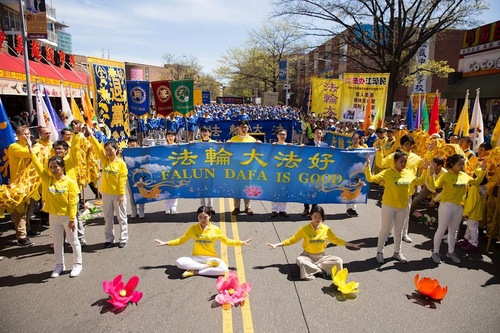 Falun Gong practitioners rally in Flushing to commemorate the peaceful protest 18 years ago in Beijing.

The rally included many speakers, including Falun Gong practitioners who have been subjected to persecution in China, a representative from the Falun Dafa Information Center, and political commentators. Practitioners sang songs praising the practice and condemning the persecution. Many passersby were drawn to the rally and several Chinese people chose to quit the CCP and its affiliates, to sever their ties with the Chinese regime. 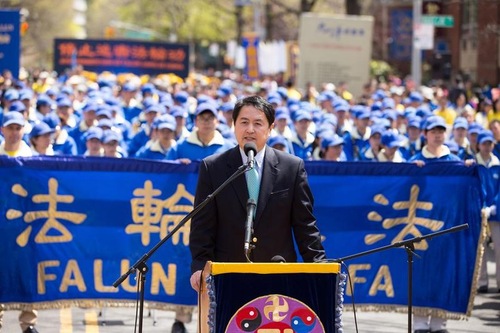 Mr. Zhang Erping from Falun Dafa Information Center talked about the significance of the April 25 peaceful protest. He said, “In the past 18 years we have seen Falun Gong practitioners fighting violence with non-violence and demolishing the Chinese regime’s lies with the truth. No matter what one believes, with his conscience, he can see that the practitioners have no political agenda and only want to practice legally and peacefully. Fighting for Falun Gong practitioners’ rights is fighting for your own human rights as well.”

Practitioner Ms. Zhang Hongyu came from Liaoning Province. Her family members used to all be practitioners. They were happy and healthy until the persecution started. They subsequently lost their jobs, and were many times imprisoned and tortured. Eventually Ms. Zhang lost her grandparents and mother. She said, “Being a victim here, I want more people to know why the persecution is wrong and we should stop it. It is still ongoing and we need the international community to help end it.”

Mr. Wang Zhiyuan from the World Organization to Investigate the Persecution of Falun Gong warned those who participate in the persecution, that the persecution is a crime of genocide and anti-humanity, and those who commit the crimes will be held accountable.

Political commentator Dr. Li Tianxiao from the Columbia University Political Science Department, along with Liu Guohua, anti-CCP activist and former associate professor of Northeastern University in China, and Lu Dong, spokesman for the New York Chinese Christian Democratic Party, came to the rally to show their support for the practitioners’ 18-year-long effort to end the persecution.

After the rally, close to a thousand practitioners gathered in front of the Chinese Consulate. They held banners to protest the persecution in the afternoon and held a candlelight vigil in the evening. 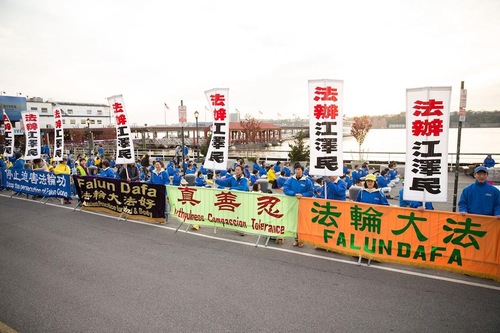 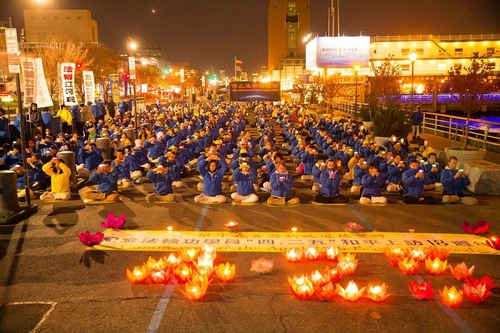 Practitioners protest and hold a candlelight vigil outside of the Chinese Consulate in New York, asking to end the persecution.

Ms. Niu Dan was only 17 when she joined the peaceful protest 18 years ago in Beijing. She said, “We just wanted to practice legally. I was put in a forced labor camp when I was 18 years old.”After that she was put in a brainwashing center. She’s been constantly harassed and finally decided to escape to the U.S. “I am still here 18 years later. I want the world to know that Falun Gong is a righteous and peaceful practice,” she said.

Ms. Shi Ning has been in the U.S. for five months. Ms. Shi has been arrested and put in prisons and forced labor camps in China, for refusing to give up her faith. Instead of giving up hope, she talked to the inmates about her belief, and many supported her and the practice.

Protest in Front of Chinese Consulate in Houston

Mr. Song from the Falun Dafa Association praised the practitioners’ act 18 years ago. He condemned former Chinese dictator Jiang Zemin for acting against the people’s will, saying, “The practitioners have always held on to their belief in Truthfulness-Compassion-Forbearance and clarified the facts of the persecution to the people of the world. Gradually their efforts paid off and more and more people saw the evil nature of the Chinese regime. So far more than 200 million Chinese people have quit the CCP and its affiliated organizations.” 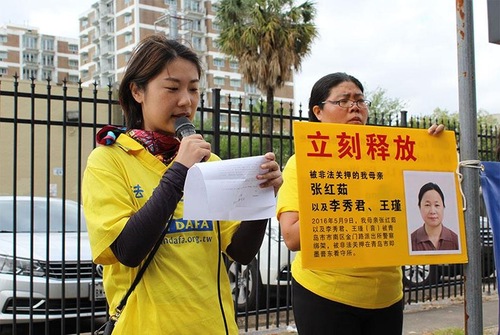 Ms. Yang Zhen asks the world to pay attention to the persecution and help rescue her mother, who is currently imprisoned.

Ms. Yang Zhen asked the international community to help rescue her 62-year-old mother from a Chinese prison. Her mother was arrested in May 2016 for displaying posters with information related to the lawsuits against Jiang. “My mother was secretly sentenced and the court didn’t inform her lawyer or family,” said Ms. Yang, who is very worried. 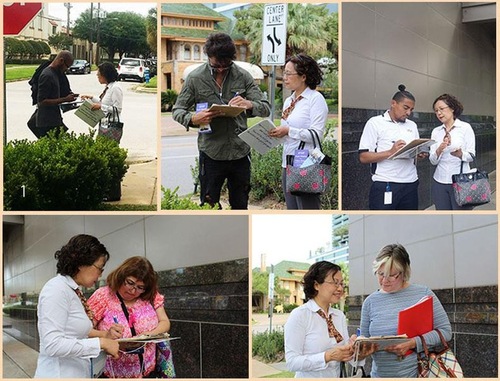 Passersby sign petition calling to end the persecution and the atrocity of organ harvesting. 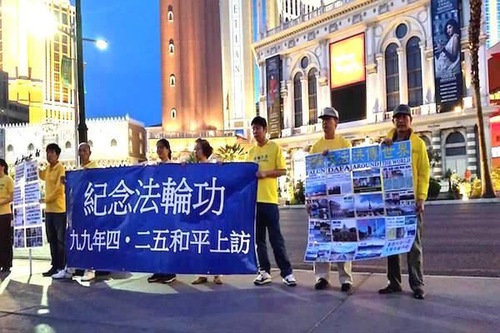 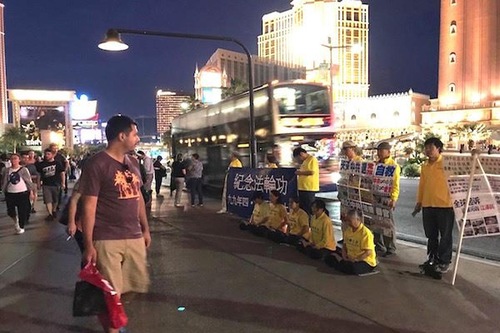 Practitioners in Las Vegas hold posters and banners to raise the awareness of the persecution on the evening on April 25.

One man, after talking to a practitioner, said that he would write to the White House and ask for support for Falun Gong. A Chinese tourist told a practitioner that he already knew about the wrongful persecution and has quit the CCP and affiliated organizations.