(Mingui.org) Besides the World Falun Dafa Day celebrations held over all the world during the last two weeks, practitioners have also participated in many community events to introduce this self-improvement cultivation practice. This report covers several that took place in Europe and Asia.

There were two notable events held in Russia. The first one was the “Everything for the Summer” expo held at the St. Petersburg Sports and Concert Complex April 19 to 22. 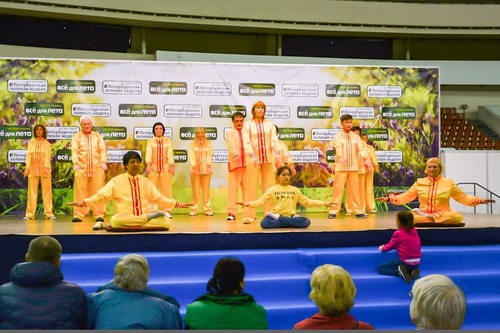 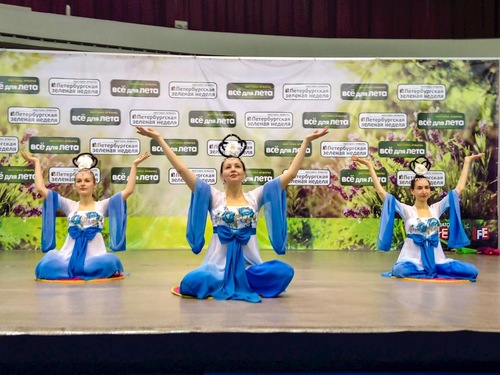 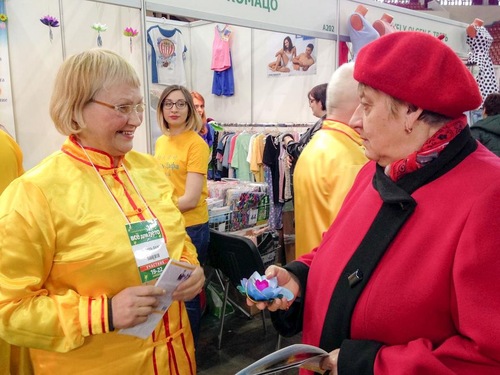 The second event was the month-long “Truthfulness-Compassion-Forbearance” Art Exhibition in Krasnoyarsk from April 16 to May 16.

More than 800 visitors viewed the artworks, which were painted by Falun Gong practitioners. The works attempt to convey what Falun Gong really is and also depict the brutal persecution in China. 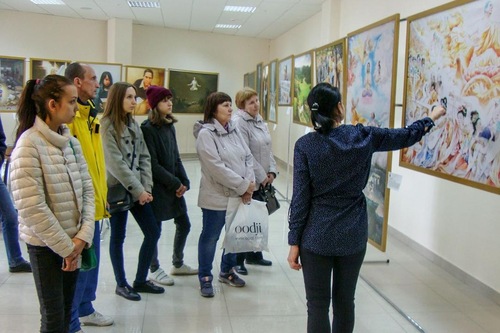 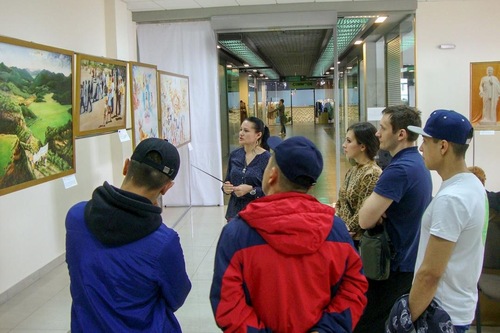 Valentin, a local teacher, said in the guest book: “I appreciate such a wonderful, soul-stirring art exhibition. The paintings are impressive. Nobody who leaves the exhibition could feel indifferent. I will never forget what I saw here. I will have a different view of the world.”

On May 1, practitioners in Lucerne, Switzerland, set up a booth at the Loewenplatz, passing out flyers and telling people, especially Chinese tourists, about Falun Gong. 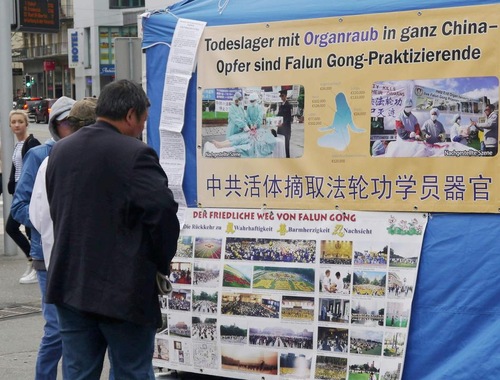 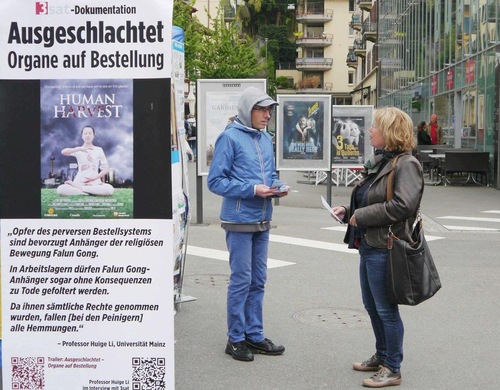 Telling people about the state-sanctioned organ harvesting in China

A few Chinese tourist groups passed by the booth. The Chinese listened to the practitioners' broadcast in Chinese, and some of them took information about the lies fabricated by the Communist Party to slander Falun Gong. Practitioners handed them software to circumvent the internet censorship in China. Many of the tourists took photos of the exercise demonstration. 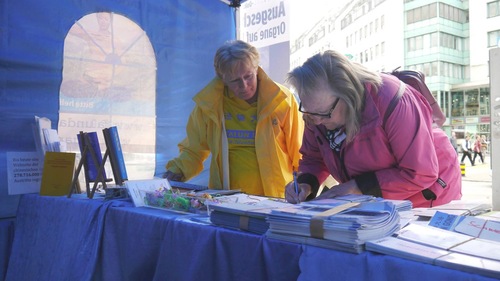 On May 5, the Tian Guo Marching Band made up of Korean Falun Gong practitioners participated in the opening parade of the “2018 Colorful Daegu” festival held in the City of Daegu. 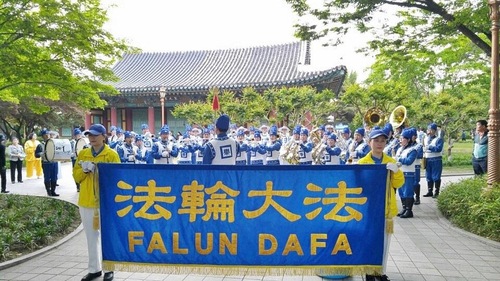 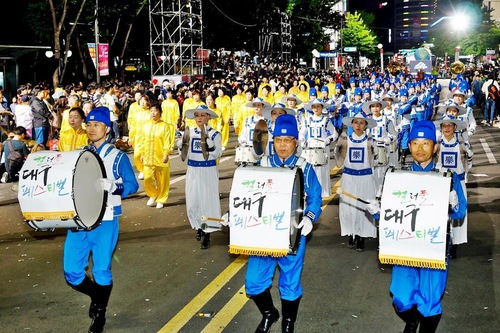 The Tian Guo Marching Band in the parade

Over 4,000 people in 73 groups made up the two-kilometer-long parade. 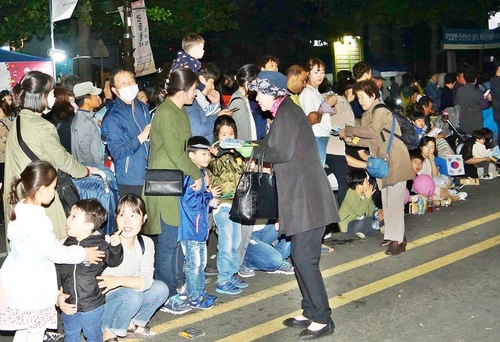 Practitioners pass out flyers during the parade. 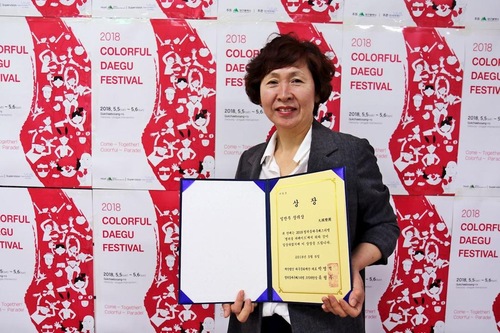 Before the Chinese Prime Minister Li Keqiang's visit to Tokyo, practitioners held a peaceful protest in front of the Japanese House of Representatives, calling for the end of the 19-year persecution of Falun Gong in China. 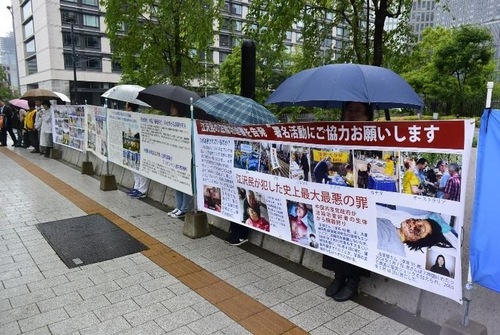 The protest in front of the Japanese House of Representatives

Practitioners asked the Japanese government to take action to help to stop the persecution and rescue those who are imprisoned because of their belief in Falun Gong. 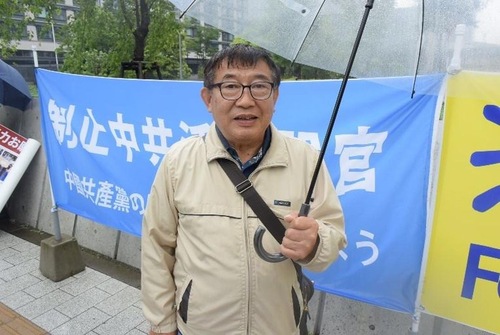 Mr. Murayama, a non-practitioner, believes that the forced organ harvesting should be stopped and that the Japanese government should help.

The Chinese versions of the reports above are available at the following links:

“Thank You Master for Making Me Good”

“Protecting Our Next Generation”