(Minghui.org) May 13 is World Falun Dafa Day, which was established to mark the anniversary of Falun Dafa's public introduction on May 13, 1992. Falun Dafa practitioners across the world hold events to celebrate the practice to inform the public about the benefits of practicing Falun Dafa (also known as Falun Gong). They also raise awareness on the Chinese Communist Party's (CCP) 18-year-long brutal persecution in China. The following are celebration events held in Ottawa and Quebec, Canada and Houston, Texas in the United States. 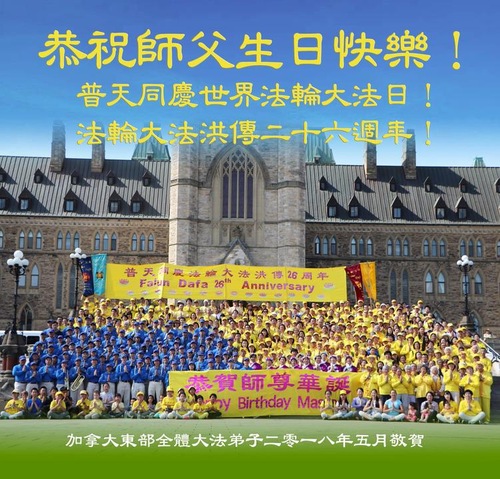 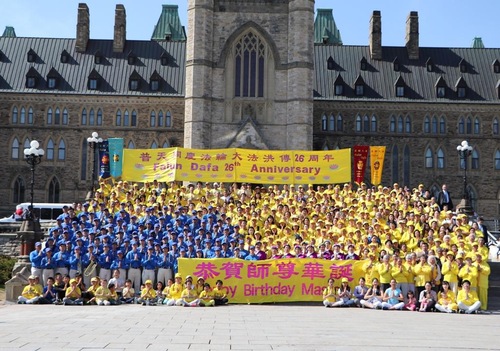 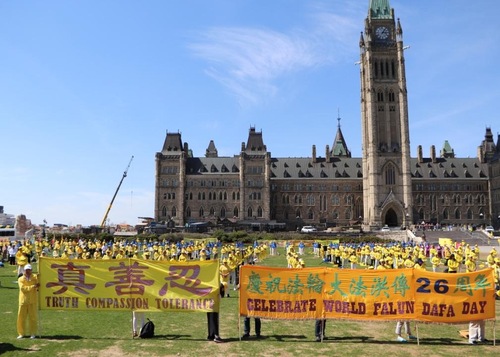 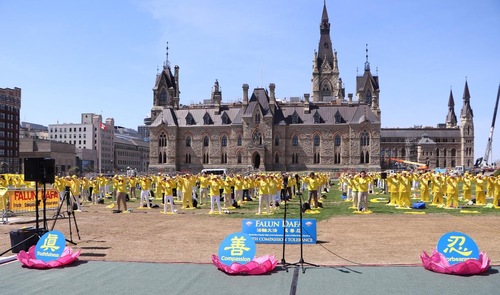 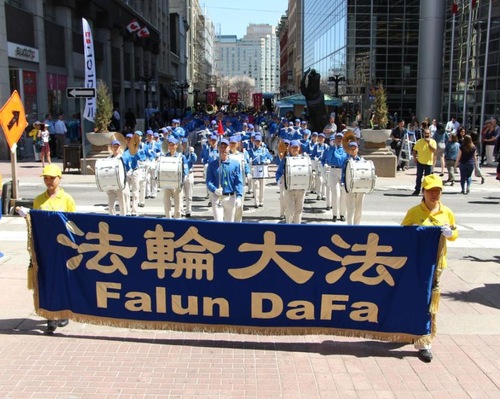 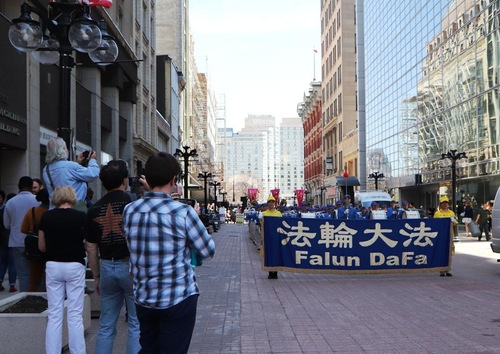 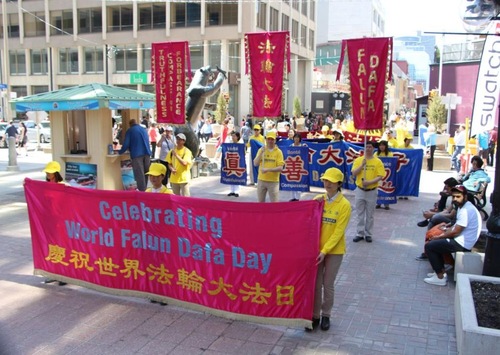 Falun Gong practitioners from Ottawa, Toronto, and Montreal celebrate World Falun Dafa Day in front of Canadian Parliament on May 9. 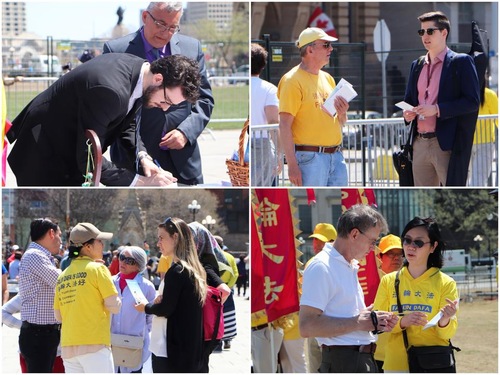 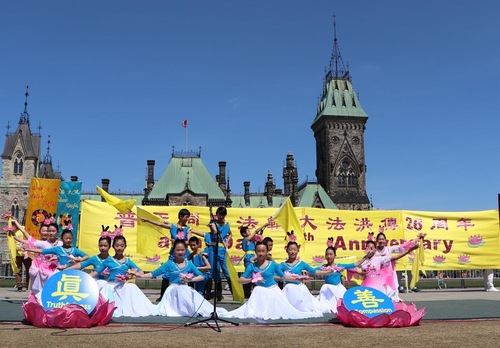 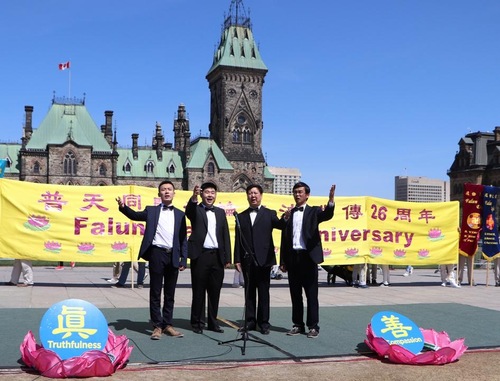 Nineteen-Year Support from Members of Parliament

Member of Parliament (MP) Judy Sgro shows up every year to support Falun Gong practitioners. She thanked the practitioners for bringing Falun Dafa to Canada. The message that the practitioners deliver is peace, compassion, and respect, which is what Canadians need to remember every day, she said.

MP Peter Kent spoke at the rally in the morning. He greeted the crowd in Chinese, saying, “Hello! Falun Dafa is good!” He speaks at the rally every year. He returned to the celebration venue in the afternoon when practitioners had group photo and videos to wish Master Li a happy birthday. He asked if he could have a group photo with the practitioners and wished to upload to his Facebook page. 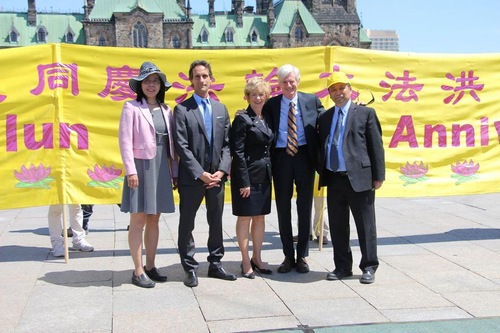 MP Judy Sgro (middle) and others have a group photo. 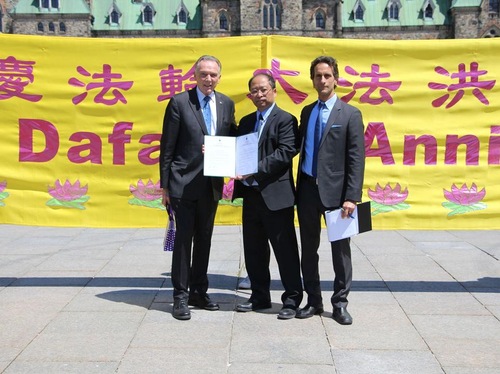 MP Peter Kent (left) gives a speech in the rally 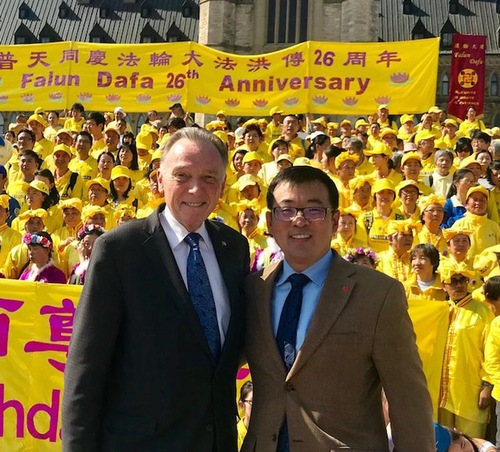 MP Elizabeth May, leader of the Green Party, also attended to show her ongoing support. No matter rain or shine, hot or cold, snow or wind, she participates every Falun Gong rally in front of Parliament. She said, “Such a beautiful scene. You are a vivid manifestation of Truthfulness-Compassion-Forbearance.” 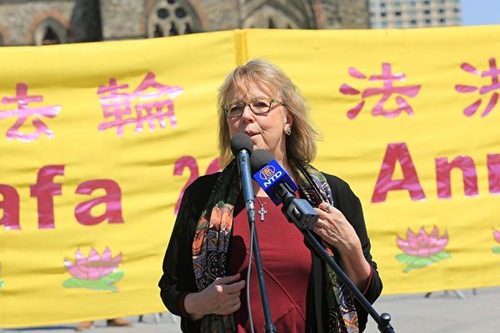 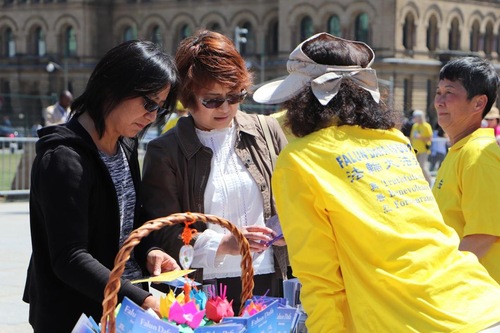 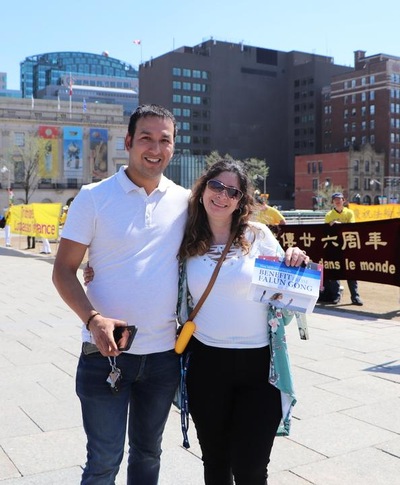 Tourist Francisco and his wife Adriana stopped watch the performance and learn about Falun Gong. 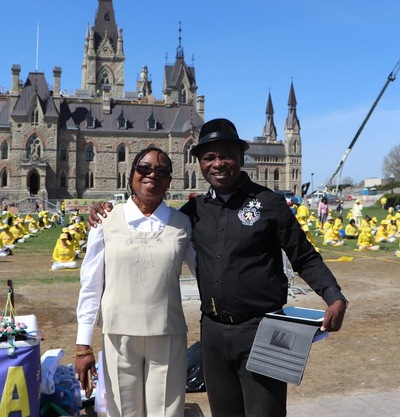 Isaac and his wife Felicity from Burkina in West Africa watch the celebration for quite a while. They took Falun Gong information materials and wished to learn more about it. 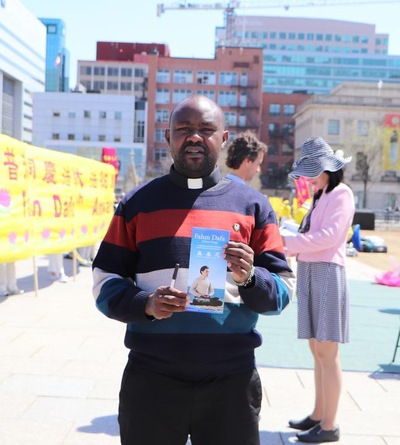 John, a friend of Andrew Bennett (former ambassador of the Canadian Religious Freedom Office, who spoke at the rally), participated in the rally and said, “Protesting the persecution is our responsibility.” 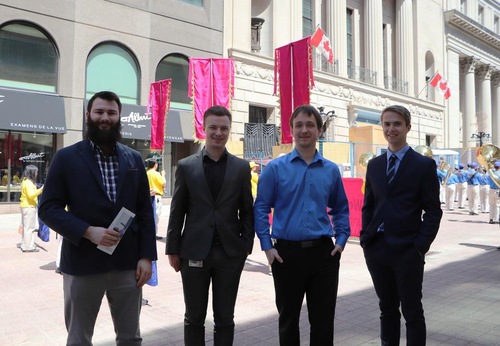 Joseph (first from left), works nearby in downtown, and his colleagues watch the march and support Falun Gong practitioners' efforts to end the persecution.

Falun Gong practitioners held celebration events in a park in Chinatown, Montreal on May 5, 2018. They also held group practice of Falun Gong exercises.

Falun Gong practitioners in Quebec wish Master Li a happy birthday on May 5, 2018. 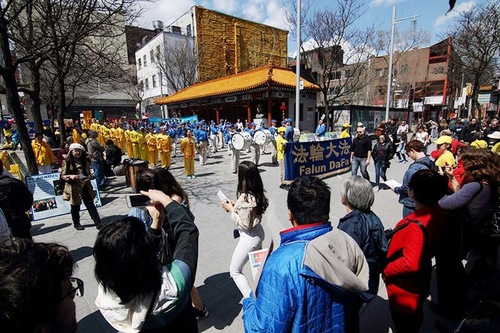 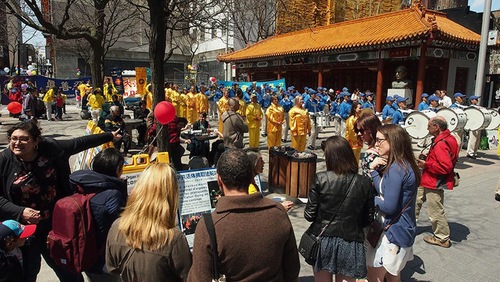 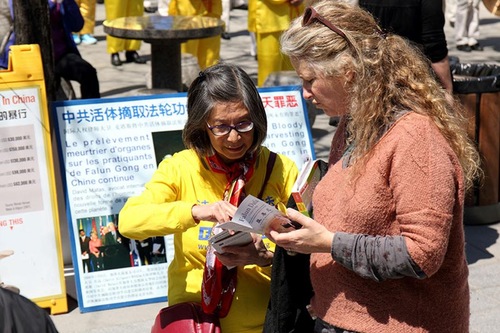 A passer-by learns about Falun Gong.

There were many visitors in Chinatown including tourists, business people, professional photographers, and TV directors. Many of them expressed support and took informational materials. 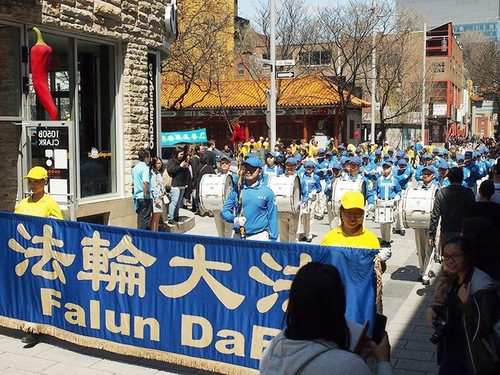 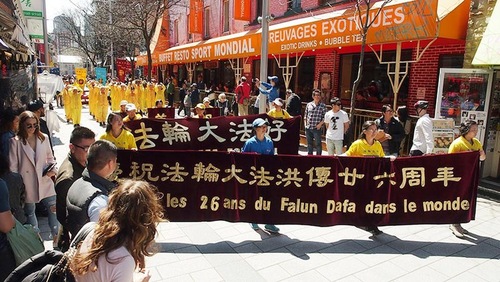 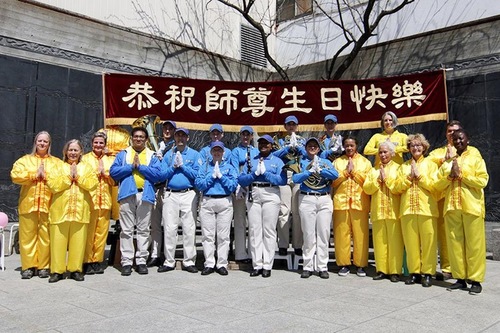 Falun Gong practitioners in Montreal wish Master Li a happy birthday on May 5, 2018. 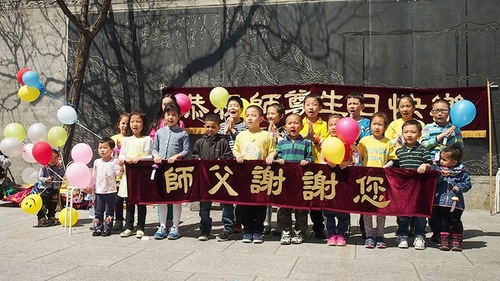 Young practitioners in Montreal wish Master Li a happy birthday on May 5.

Falun Gong practitioners in Houston, Texas held a celebration event in front of the city hall of City of Sugar Land on May 5, 2018. 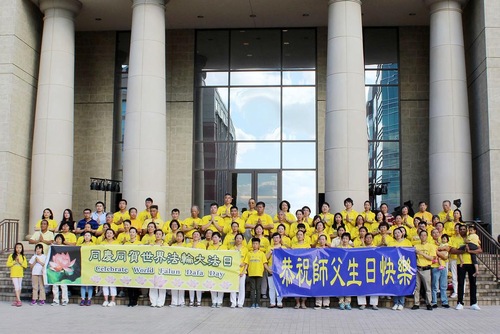 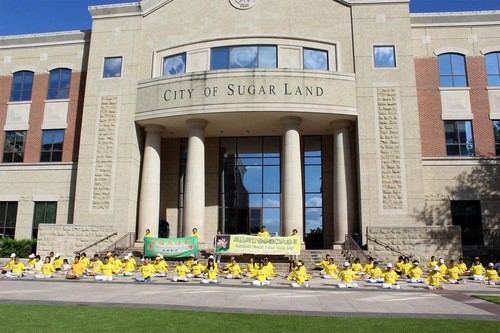 Sugar Land is a satellite city of Greater Houston with a population of about 80,000. There are many shops, restaurants and hotels around the city hall.

Falun Gong practitioners demonstrated the exercises in front of the city hall from 4 to 6 pm. Many passers-by paused to watch.

Martha and her daughter watched the exercise demonstration. She said, “It's so peaceful!”

She commended the Falun Gong principles of Truthfulness-Compassion-Forbearance, adding, “My daughter and I are learning the Chinese language. We really like traditional Chinese culture.”