Romania: “Petals of Peace” Events Held in Buşteni and Braşov

(Minghui.org) Falun Dafa practitioners from Romania and the Republic of Moldova held events in two popular mountain towns—Buşteni and Braşov—on April 30 and May 1 respectively, to introduce Falun Dafa and raise awareness of its persecution in China. The beautiful spring weather brought visitors from around the world.

In Buşteni on April 30, practitioners demonstrated the gentle Falun Dafa exercises and collected signatures calling for an end to the persecution in China. They also held a special event for children (and the young at heart) called “Petals of Peace.” 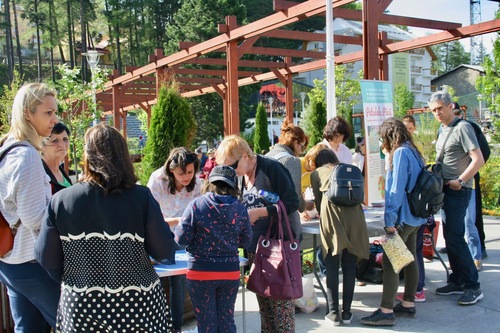 At the “Petals of Peace” stand, children and anyone else who wished to learn were invited to make origami lotus flowers to give as gifts in remembrance of children who face persecution for their faith in China.

The Petals of Peace project was initiated in Australia in 2001, inspired by a Chinese-Australian girl named Fadu, whose father was persecuted to death when she was one year old.

The project aims to inform children, teachers, and parents of the injustices that practitioners in China face, as well as Falun Dafa’s principles of Truthfulness, Compassion, and Forbearance. As people learn to make the beautiful lotus flowers, practitioners explain the significance of the lotus flower in traditional Chinese culture and emphasize the importance of self-improvement by making a commitment to be honest, goodhearted, and tolerant. 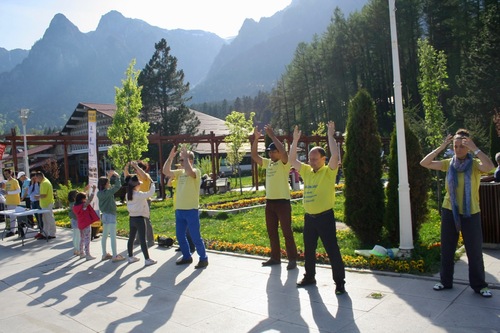 Practitioners demonstrate the Falun Dafa exercises while a group of children on vacation at the Busteni mountain resort joined them.

The couple asked many questions. As they left, they congratulated the practitioners and thanked them for having enriched their lives by sharing the information. 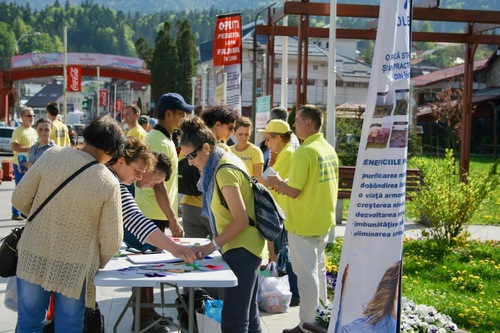 Locals and tourists sign a petition initiated by Doctors Against Forced Organ Harvesting, a non-governmental organization that focuses on the state-sanctioned killing of Falun Dafa practitioners in China for their organs. Many also signed a criminal complaint against Jiang Zemin, the former Chinese Communist Party leader who directed the persecution of Falun Dafa.

The event in Braşov was held on May 1 in the town's Central Park. Two students stopped by and asked whom they could contact for detailed information on the harvesting of organs from practitioners in China. One of the young women, a student majoring in International Relations with a focus on human rights, was studying the persecution of Falun Gong and the development of the organ harvesting atrocities. A practitioner with a background in legal studies offered to make available to her everything that has been documented on this issue. 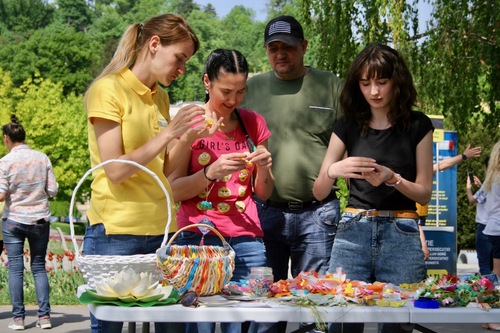 Young ladies from Braşov make lotus flowers and plan to offer them to people to remind them of the importance of protecting the children of the world. 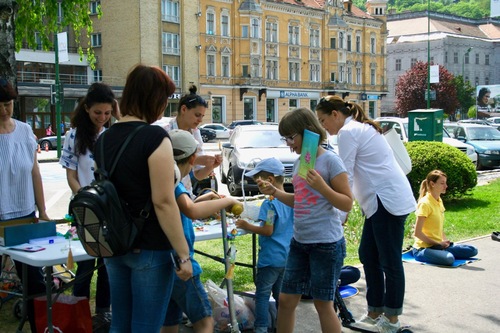 At the Petals of Peace stand, Lotus Story books were offered, along with origami lotus flowers and instructions on how to make them. A practitioner nearby is doing the Falun Dafa sitting meditation.

An older woman was delighted to see her granddaughters so absorbed in making the origami flowers. She remarked that the activity promoted positive values that were necessary for children's healthy upbringing, while lamenting the fact that it may be too late for some older people to make changes in their lives.

A practitioner assured her that it is never too late, because when someone chooses to have an attitude in accordance with the principles of Truthfulness, Compassion, and Forbearance, one becomes more balanced and healthier, and consequently will strive to eliminate behavioral patterns that harm not only health but also quality of life.

The practitioner further explained that Falun Dafa, which includes the best of traditional Chinese values, is well adapted to the needs of contemporary people who have families, jobs, and the myriad of stress factors in life.

The woman wanted to know more about how to practice Falun Dafa. A practitioner explained that there are no preconditions to learning, that the information is offered free of charge, and that everyone is welcome to practice to whatever degree they wish to. The books and the exercise instruction, also available for free on the Internet, provide a wider perspective on the universe, life, and the human body. Pleasantly surprised, she said that she would learn more about the practice. 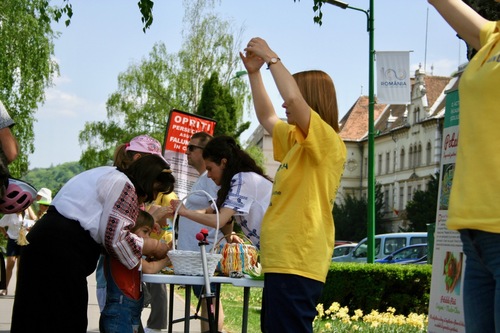 Practitioners show children how to make lotus flowers, while others demonstrate the Falun Dafa exercises at an event in Braşov.

Later that day, the practitioners held an exercise demonstration at the popular Poiana Brasov mountain resort. 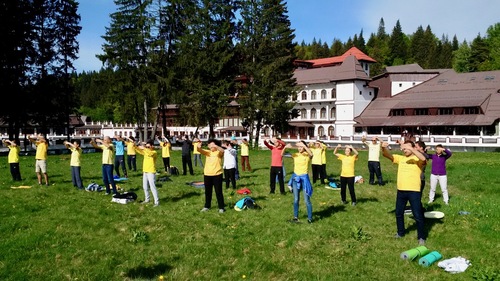