(Minghui.org) Reports on worldwide activities commemorating the 19thanniversary of the April 25 peaceful appeal in Beijing continue to pour in to the Minghui website. Below are reports about four events that took place in Canada, Germany, and Romania.

A day-long event in front of the Chinese consulate in Toronto on Wednesday, April 25 included a press conference in the morning, a banner wall in the afternoon, and a candlelight vigil that night. 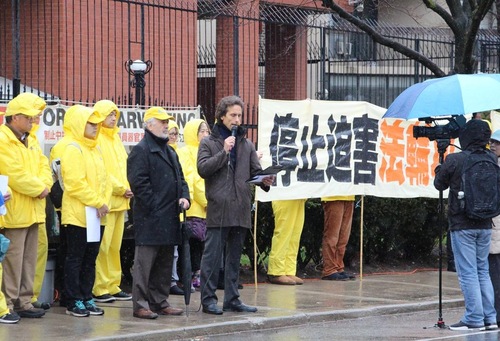 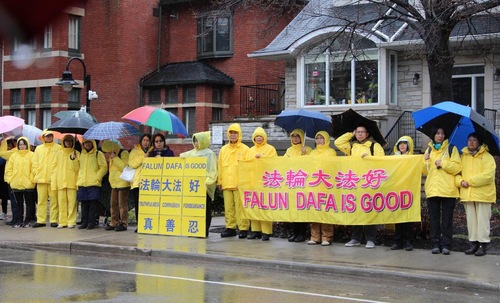 A banner wall in front of the Chinese consulate in Toronto calls for the end of the persecution of Falun Gong in China. 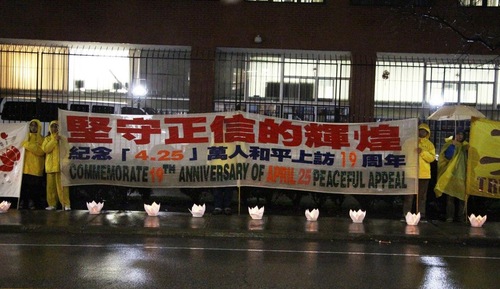 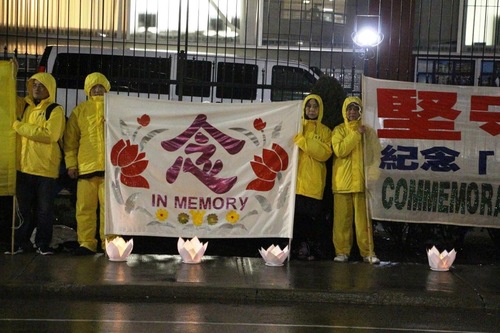 Candlelight vigil in Toronto commemorates practitioners who lost their lives in the 19-year persecution of Falun Gong.

Former Canadian Senator Con Di Nino attended the press conference and gave a speech in the rain. Di Nino initiated the “Parliamentary Friends of Falun Gong” some 10 years ago with several other parliament members.

At the press conference, the former senator said the motivation in setting up the Parliamentary Friends of Falun Gong was because he and his co-workers believe that the persecution in China is illegal and inhuman. 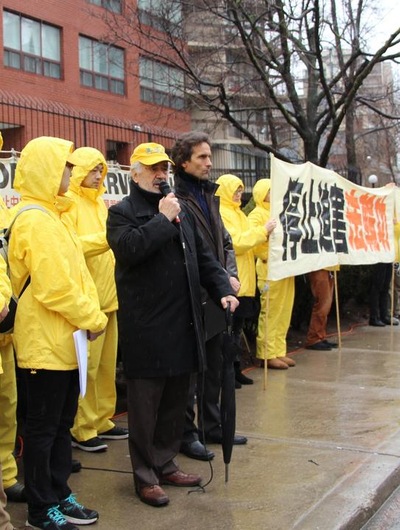 Former senator Con Di Nino condemns the state-sanctioned forced organ harvesting of prisoners of conscience in China. He believes that China cannot become a world leader because of their severe human rights violations.

Di Nino called the persecution of Falun Gong shameless, and expressed that he will continue to support Falun Gong as he has over the last decade.

The event was also strongly supported by local citizens. 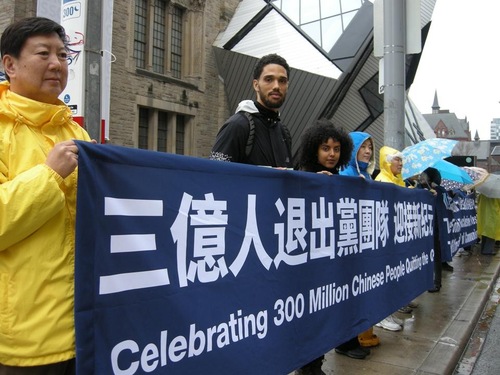 Sam Kass and Max Lastman, two college students, thanked practitioners for coming out in the rain and informing the public about the persecution. Ms. Kass said that she admires practitioners' spirit. 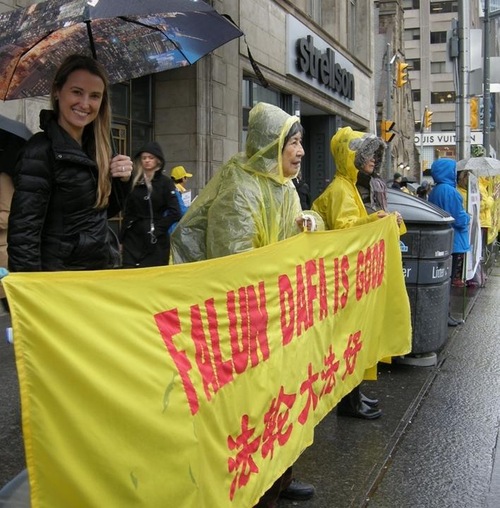 Terri Phillips condemns the forced organ harvesting of Falun Gong practitioners and other prisoners of conscience in China. She hopes that the communist party will end soon. 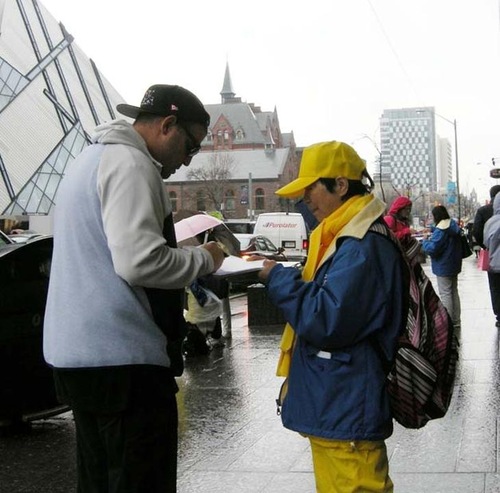 A passerby signs the petition in support of Falun Gong's peaceful resistance.

At the event, several practitioners who attended the peaceful resistance in Beijing 19 years ago shared their personal experiences of the historic event. 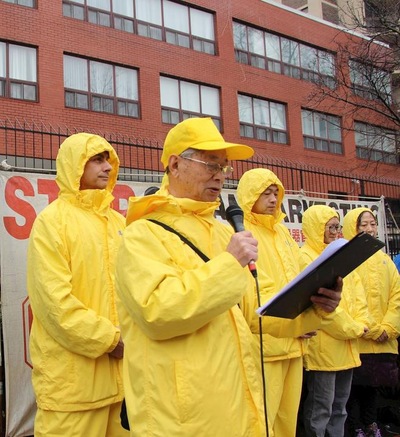 Seventy-nine-year-old Liu Zhichun said that at the protest on April 25, 1999, he heard passersby praising the protesters as a group of peaceful people with high moral standards. 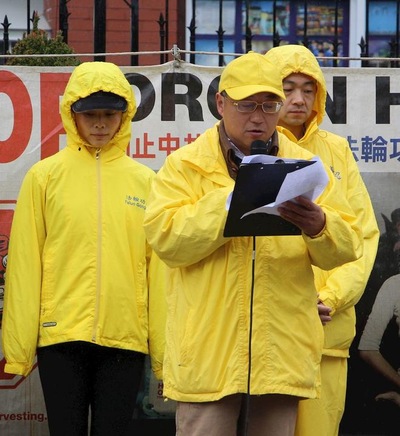 Bian Jianwu, who attended the peaceful protest 19 years ago, recalled that the protest was quiet and well-disciplined. The practitioners did not interfere with the local traffic. “There was no physical conflict at all,” he said.

The April 25 commemoration in Edmonton took place in Dr. Wilbert Mclntyre Park on April 21. Practitioners demonstrated the exercises, handed out flyers, and collected signatures on a petition condemning the state-sanctioned forced organ harvesting of Falun Gong practitioners and other prisoners of conscience. 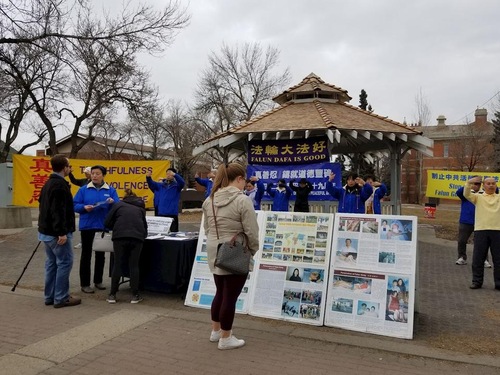 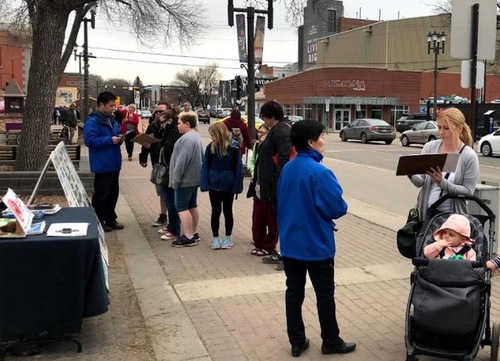 Passersby talk to practitioners and view the materials to learn more about Falun Gong and the persecution in China. 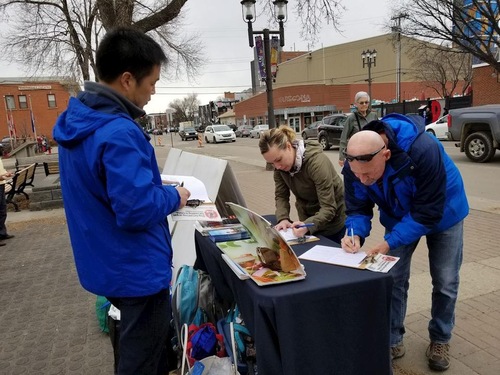 A nurse from Stollery Children's Hospital and her friend sign the petition condemning the forced organ harvesting.

Practitioners in Hamburg, Germany, held a 19-hour protest in front of the Chinese consulate from 5 a.m. to 11 p.m. on Wednesday, April 25. 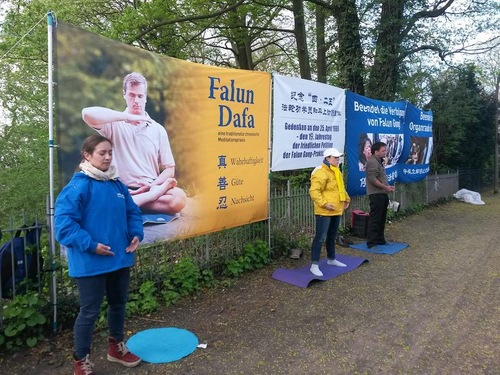 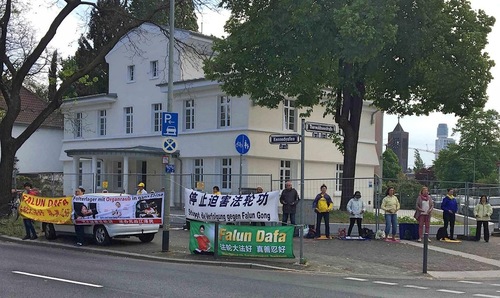 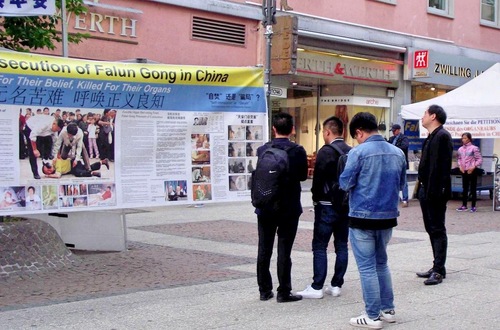 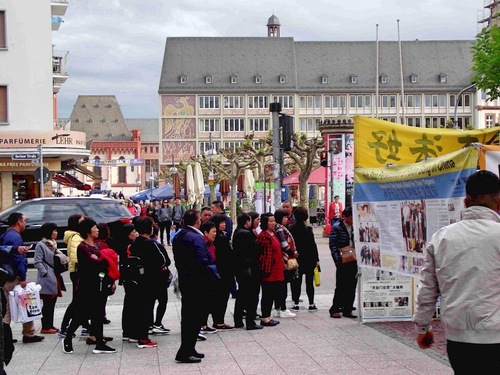 The peaceful protest in front of the Chinese consulate in Hamburg. 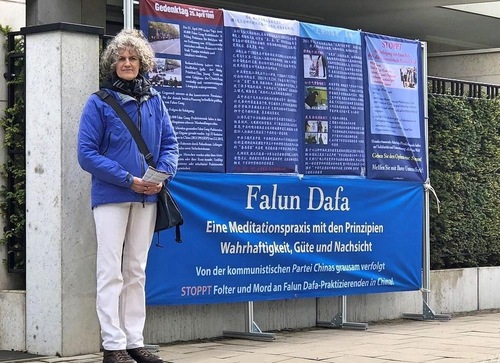 Practitioner Birgit hopes that her fellow practitioners in China will have the freedom to practice their belief like she does in the free world. 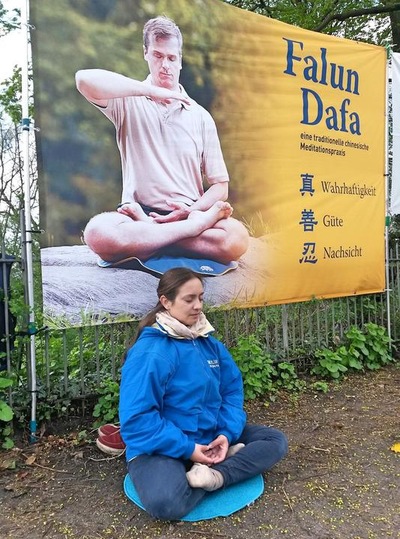 Silvia started practicing Falun Gong in 2001. She values traditional Chinese culture and hopes that the Chinese people will learn what Falun Gong really is.

Practitioners in Bucharest, Romania, also held a peaceful protest in front of the Chinese embassy on Wednesday April 25. 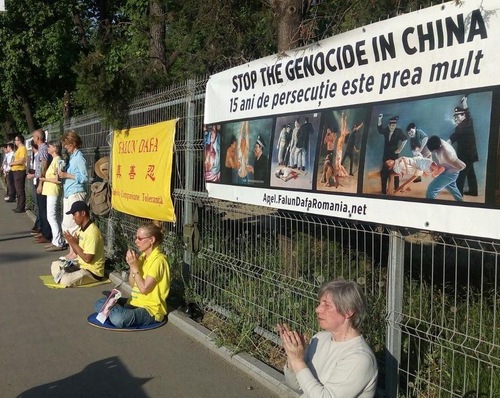 Peaceful protest in Bucharest draws attention to the persecution of Falun Gong in China.

Practitioners demonstrated the exercises and set up display boards exposing the brutal persecution in China. Many people stopped by, talked to practitioners, viewed the materials, and took flyers. A number of them also wanted to learn the Falun Gong exercises.

“Clarifying the Facts of Dafa to My Students and Their Families”