(Minghui.org) Falun Gong practitioners and supporters in Hong Kong held a rally on Thursday, April 26, 2018, condemning the long-term harassment carried out against them by the Hong Kong Youth Care Association Limited (HKYCA) and requesting the government to take action to stop the HKYCA's crimes.

As a Hong Kong-based organization with close ties to the Chinese Communist Party (CCP), the HKYCA disregards local laws and regulations and blatantly harasses Falun Gong practitioners, local residents, and tourists. A number of HKYCA's members have allegedly been involved in cases of personal attack and intentional injury. 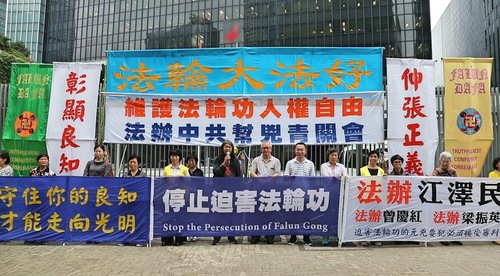 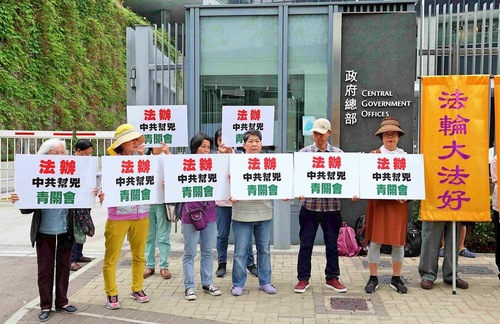 It has been reported that, since June 2012, the HKYCA, which shares an office in Shenzhen with the 610 Office, the extralegal communist party task force established to execute the campaign of eliminating Falun Gong in China, has regularly engaged in the harassment of Falun Gong practitioners and Falun Gong events in Hong Kong.

According to Falun Gong practitioners, members of the green-shirted group have surrounded practitioners at event sites, used megaphones at close range to shout insults and threats, spit on them, and even, when the police were not looking, physically assaulted them. In one well-publicized incident, an individual affiliated with the Youth Care Association brandished a large knife to threaten a Falun Gong protester.

The association has sought to cover up not only Falun Gong banners but entire Falun Gong sites in locations throughout Hong Kong, attempting to wall them off from passersby with their own giant banners.

Speakers at Thursday's rally pointed out that the new Hong Kong administration has failed to restrain the HKYCA's harassment, with the situation worsening since last October. In one instance, association members pretending to be Falun Gong practitioners tried to destroy Falun Gong's reputation by acting inappropriately in public. Falun Gong practitioners have reported such cases to the police, but the government has not taken any action.

At the rally, spokesman for the Falun Dafa Association Gan Hongcheng emphasized the importance of religious freedom and traditional moral values.

In his address, Gan briefly listed the crimes that the HKYCA has committed. He said, “Hong Kong follows the rule of law. Whether the HKYCA is brought to justice depends on whether the Hong Kong government has the courage and the will to stand up against the pressure from the communist party and abide by the laws and freedoms of Hong Kong.”

Former Hong Kong Legislative Council member Liang Guoxiong showed his support for Falun Gong at the rally. Liang said, “If we don't stand up against the suppression of freedom of speech and belief, then the next one who is suppressed will be us.”

Another former lawmaker, Lam Wongyan, asked why the government has failed to uphold the law and bring the HKYCA to justice. He also praised Falun Gong's peaceful resistance to the persecution.

The HKYCA's ongoing harassment has been condemned by numerous opinion leaders and lawmakers recently.

Cardinal Chen Rijun and Legislative Council Member Hu Chiwai both believe that the HKYCA is a violent organization and that their harassment of Falun Gong amounts to a hate crime. They feel that the organization has damaged the freedom enjoyed in Hong Kong.

Legislative Council members Lam Chuoting and Leung Yaochung called upon the citizens of Hong Kong to uphold the reputation and laws of Hong Kong and not allow the HKYCA to ruin it.

Leung Kah-kit, Chair of the Civic Party, condemned the Hong Kong police department's bias and failure to act on this issue, which, he said, will undermine the rule of law Hong Kong.

“Impressed by a Fellow Practitioner's Righteous Thoughts and Actions”