Germany: Raising Awareness of the Persecution in China During the Hamburg Summit 2018

(Minghui.org) Falun Gong practitioners in Germany held two activities on November 26 and 27 during the Hamburg Summit: China Meets Europe, a biennial high-level conference on economic relations between Europe and China. Organized by the Hamburg Chamber of Commerce and held for the first time in 2004, the Chinese delegation was led this year by Liu He, Vice-Premier of China's State Council. 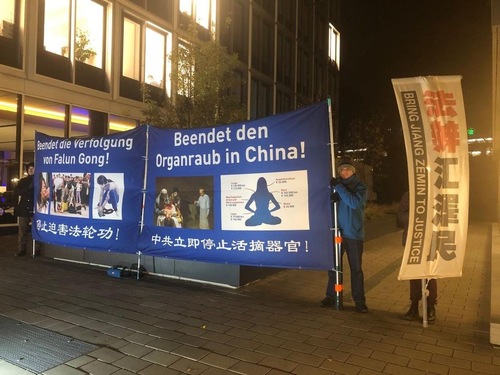 Outside the main conference venue at the chamber of commerce, practitioners held large banners in Chinese, German, and English calling for an end to the persecution in China, especially the organ harvesting from living Falun Gong practitioners.

“This [Persecution] Is Absurd!”

Many conference attendees accepted materials from practitioners. Some German delegates said they had heard about the persecution and thanked practitioners for distributing such important information during the conference.

Passersby also stopped to talk with practitioners and get updates about the situation in China. One woman shook her head after learning about the Chinese regime's persecution of Falun Gong. “This [persecution] is absurd!” she said. “I did not know about this. Thank you for telling me. I will definitely look into it.”

A man talked with a practitioner for a long time and asked questions about Falun Gong as well as the suppression in China. “It's important to tell people all of this. Please keep it up,” he said.

During the conference, a Chinese delegate asked security officers to keep Falun Gong practitioners away from the site and to stop practitioners from distributing materials at the building entrance. In response to this request, the police officer in charge of public rallies replied, “This is not China. We respect freedom of speech here in Germany.” The officer also told practitioners to contact the police if they met with any interference.

The positive attitude of the police in Germany has come after consistent efforts from practitioners. Back in April 2002 when Jiang Zemin, the former Communist Party leader who initiated the persecution of Falun Gong, visited Germany, police officers were asked by Chinese officials to check practitioners' IDs, record their personal information, and have them leave the site.

Over the years, practitioners have continually followed up to inform various government agencies of the peaceful nature of Falun Gong, its benefits to practitioners and society, as well as the harsh suppression in China. As a result, many police officers in Germany are thoroughly aware and supportive of Falun Gong practitioners' efforts.