Ms. Chen Sulan, 53, from Fushun City, was arrested for going to Beijing to appeal for Falun Gong on December 1, 2001. She was detained in the Fushun City Detention Center and beaten to death in less than a week.

Mr. Wei Zaiixin, 62, a senior engineer at the School of Advanced Technological Studies, was arrested in June 2002 and detained in the Fushun City #2 Detention Center. The guards came up with an exceptionally painful torture to inflict on him, and he died on November 5, 2002. 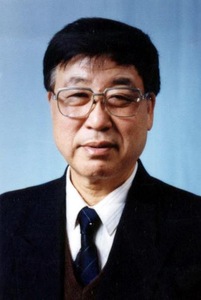 After Mr. Wei was first tortured, his wounds became infected and later developed scabies. The guards refused to allow anyone to clean his wounds. After the pus and blood had glued his skin to his clothes, they instructed criminal inmates to strip off the clothes. His skin was torn off and blood flowed down his legs. Every time the guards gave the order, Mr. Wei's wretched cries could be heard down the hall. The guards and criminals laughed as they watched Mr. Wei writhe in pain. They repeated the process after the pus and blood dried up and stuck to Mr. Wei's clothes again. They named this method of torture “wearing mourning clothes.”

3. Huang Ke - died while being force-fed

Mr. Huang Ke, who worked at the 10th Research Laboratory of Fushun Petroleum Chemical Engineering Research Institute, was arrested in March 2003 and detained in the Fushun #1 Detention Center. He was force-fed when he started a hunger strike to protest his illegal incarceration. Mr. Huang resisted and was released ten days later. 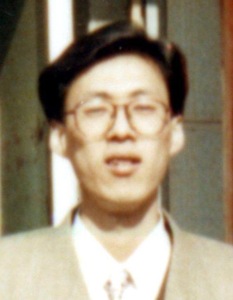 Mr. Huang was arrested once again in late June 2003 and taken to the same detention center. He died while being brutally force-fed on July 3, 2003. He was only 31. He was survived by his young child and elderly parents.

Mr. Huang's wife, Falun Gong practitioner Ms. Zhong Yunxiu, was tortured to death in October 1999, after going to Beijing to appeal for justice for Falun Gong.

Ms. Wang Xiuxia was arrested on May 29, 2003, and detained in the Fushun City #2 Detention Center. 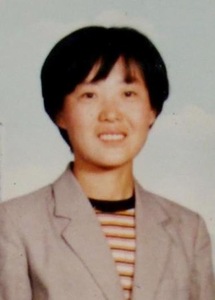 Ms. Wang began a hunger strike to protest and was force-fed multiple times. Guards handcuffed her and put 53-pound foot shackles on her. She was tied to an iron chair torture device for several days. She had to sit in one position the entire time. Nonetheless, she refused to give in and shouted, “Falun Dafa is good! Truthfulness-Compassion-Forbearance is good!” The guards used dirty rags to cover her mouth and sometimes simply taped her mouth shut. They also beat and cursed at her, and stabbed her arms and legs with toothpicks.

Another practitioner, Jia Naizhi, asked deputy head Yu Huide to untie Ms. Wang from the iron chair, but Yu refused. To show their support for Ms. Wang and protest the torture Falun Gong practitioners were being subjected to, many practitioners detained in the #2 Detention Center began a hunger strike.

Two days later, Yu gathered all the drug addicts and other criminal inmates in the detention center together, gave them cigarettes, and told them to beat the practitioners who were on hunger strike.

Over a dozen of them began to beat Ms. Wang. Zheng Min, the lead inmate of cell 102, stomped on Ms. Wang's heart three times until blood gushed out of her mouth. Another inmate Zhang Baohua recalled later, “I saw that she was going to die, so I immediately left with the others from my cell.” In the days that followed, Ms. Wang went into a coma, but the inmates still burned her with cigarette butts and pulled out her pubic hair and the hair under her armpits. Her pudendum was so swollen, she was unable to urinate. On June 15, Ms. Wang died in the detention center at the age of 42.

5. Zhang Shouhui - head smashed against a wall until she fainted

Ms. Zhang Shouhui, who had already been arrested multiple times, was arrested again on May 29, 2003.

The police covered her head with a black bag and dragged her into a dark room. They tied her to an iron chair. Two guards pulled her hair, slapped her face, and hit her in the chest. When they were tired, they used high voltage incandescent bulbs to burn her. She was later transferred to the Fushun Detention Center. 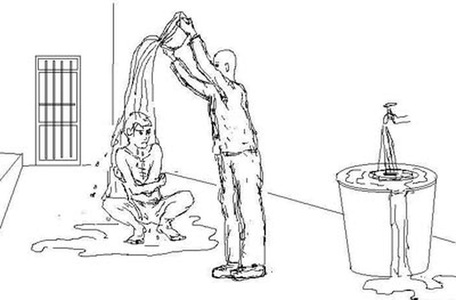 When she was first transferred to the detention center, guards instigated the criminal inmates to drag her into the restroom, strip off her clothes, and pour cold water on her. She couldn't stop shivering. Then they pinched her thighs and arms until they bled. As a result, Ms. Zhang often had convulsions, palpitations, and chest pain. Instead of taking her to the hospital, the guards, claiming that she was faking, dragged her outside and beat her, then tied her up on an iron chair. 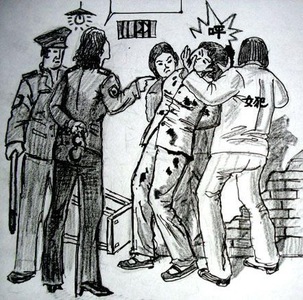 Torture reenactment: Beating and hitting head against the wall

One day, the criminal inmates stomped on Ms. Zhang and dragged her to the corner of the room. Liu Yun grabbed her by her hair and slammed her head against the wall. Ms. Zhang fainted.

Mr. Song Wenliang was arrested in October 2002 and detained in the Fushun City #2 Detention Center. The dark and damp environment in the center caused scabies to spread quickly among the inmates, and Mr. Song was soon infected. Guards told the criminal inmates to “treat” Mr. Song's scabies, so they used their shoes to smash the scabies, then rubbed salt into the fresh wounds. 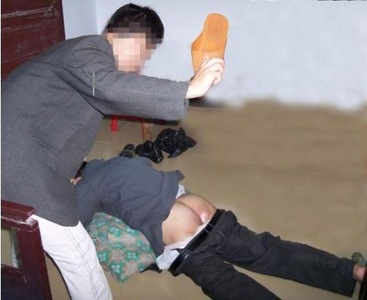 Guard Wu hit Mr. Song's buttocks with his shoes until they began to bleed and then poured salt water on the wounds.

7. Du Jingqin - tortured to death on a tiger bench 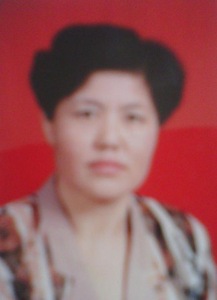 Ms. Du Jingqin was tortured to death on February 24, 2017. She had been arrested four times and was given one year of forced labor and sentenced to four years in prison. She was tortured on a tiger bench.

Guard Zhao Chunyan instigated criminals to torture Ms. Du. They tied her hands to a tiger bench and put shackles on her. The inmates then beat and kicked her. Two of them jumped on Ms. Du's chest. Blood gushed out of her mouth and sprayed the wall. She fainted immediately. 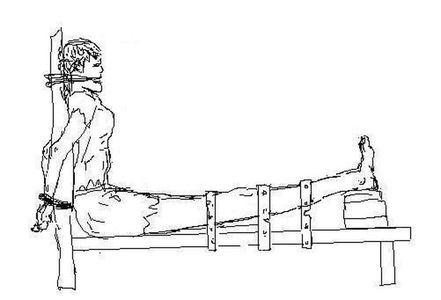 The tiger bench was in the hallway, where there was no heat and the temperature was often below freezing. Guards refused to let Ms. Du use the toilet, so she was left with no choice but to wet herself. She was released from the tiger bench only when she was on the verge of dying. She was full of bruises, her face and lips were swollen, her mouth and nose were bleeding, her eyes were swollen, and two of her teeth had been knocked out.

8. Tian Caiying - tortured to near death, passed away at the age of 59

Ms. Tian Caiying was arrested at home on April 22, 2016, and detained in the Fushun City Detention Center. 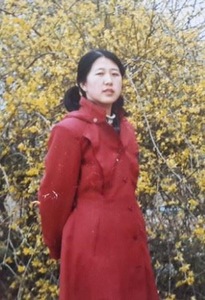 Ms. Tian was forced to stand for extended periods of time and deprived of sleep. Several criminal inmates beat her. She was detained for more than seven months and began to have symptoms of liver and kidney failure and edema, and was diagnosed with lymphatic tuberculosis. Ms. Tian was nonetheless sentenced to seven and a half years with one-year bail. She passed away at the age of 59 on August 2, 2017, while out on bail.

Ms. Jin Shunnu, a Korean-Chinese from Fushun City, was arrested five times. In October 2002 she was illegally sentenced to 13 years in prison and was incarcerated in Liaoning Province Women's Prison. The guards there used electric batons and other methods to torture her. She was released on April 5, 2015, after serving her full term. 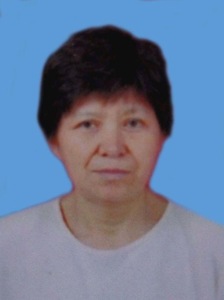 Ms. Jin was arrested once again on September 19, 2018, and held in the Fushun Detention Center. Her family received a phone call from the center on October 6, notifying them that Ms. Jin had been hospitalized. She was in a coma when her family got to the hospital. The center authorities forced her family to sign their names, relieving the center of all responsibility for Ms. Jin's condition. They threatened her family that if they did not sign, they would make sure Ms. Jin got a long sentence. Ms. Jin's daughter and husband signed the paper. They stayed in the hospital with Ms. Jin for four days, but she never regained consciousness and passed away on October 10 at the age of 66. 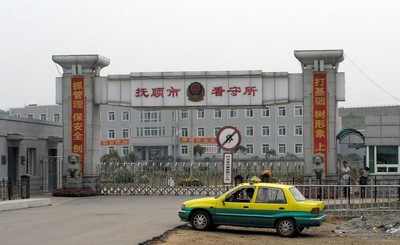 After Being Imprisoned at a Labor Camp Twice, Ms. Zhang Shouhui from Fushun City, Liaoning Province Is Persecuted Once Again

Liaoning Woman Passes Away from Torture in Detention Center

“Cultivation Stories from a College Teacher”