(Minghui.org) A large poster of Falun Gong practitioners on Tiananmen Square appealing for an end to the persecution was one of 25 large billboards on display in Nuremberg, Germany, to celebrate the 25th anniversary of the Way of Human Rights, an outdoor monument.

Bearing the title “For 19 years, Falun Gong practitioners in China have had no human rights,” the Falun Gong billboard was on display from October 22 to November 2, 2018.

The billboard featured a large photograph of several Falun Gong practitioners holding banners with the characters for Truthfulness-Compassion-Forbearance as they petitioned on Tiananmen Square in Beijing. A Chinese policeman has ripped banners away from several practitioners and holds the crumpled banners in his hands. There are several dozen Chinese onlookers. 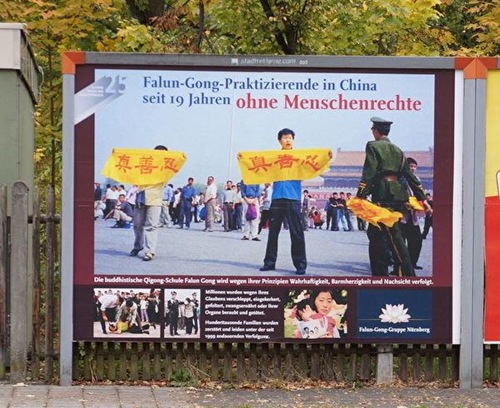 One of the three small photographs in the lower section of the billboard shows two plainclothes policemen holding a Falun Gong practitioner to the ground. One of the police officers is trampling on the face of the practitioner. Many onlookers are shown in the photograph.

The second small photograph shows two police officers arresting a female Falun Gong practitioner and brutally buckling her hands behind her. One of the police officers has covered her mouth.

The third small photograph shows a mother holding her young daughter in one arm and a photo of their former family of three in the other. The father of the child was tortured to death in China for practicing Falun Gong.

A sentence in German between the large and the small photos reads, “Falun Gong is persecuted for its principles of Truthfulness-Compassion-Forbearance.”

Between the smaller photos, a brief introduction about the persecution of Falun Gong practitioners reads, “Millions of people have been abducted, detained, tortured, and force-fed due to their belief. Or their organs have been forcefully removed for transplantation. The people are killed in the process. Tens of thousands of families have been broken apart and persecuted since 1999.”

A lotus flower in the lower righthand corner of the poster symbolizes purity and peacefulness.

Each of the human rights-themed billboards measures about 11.5 feet (3.5 meters) wide and 6.5 feet (2 meters) high. The billboards were part of a series of activities organized by the Nuremberg city government to celebrate the 25th anniversary of The Way of Human Rights. Photographs of the posters will go into an archive, and the government was also making videos to promote information about the activities through different channels.

The city of Nuremberg, which is located in Bavaria in central Germany, gradually made efforts to become the human rights capital of Germany following the trials of the Nazis in the wake of World War II. Construction of the 100-meter-long Way of Human Rights was part of these efforts, and was completed next to the German National Museum in downtown Nuremberg on October 24, 1993. 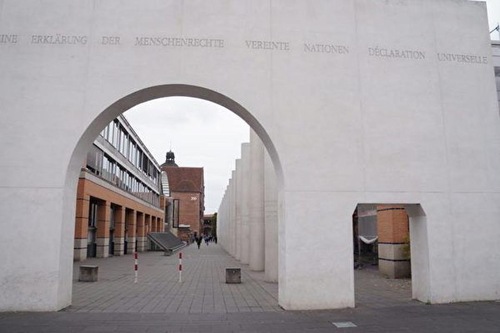 The Way of Human Rights in Nuremberg, Germany

The entrance of the Way of Human Rights is an imposing white concrete structure with a large archway in its center and two smaller rectangular entrances either side of the arch. Inside, 27 concrete columns that are eight meters tall run along one side of the pedestrian street. The columns are engraved with articles from the UN Universal Declaration of Human Rights in different languages.

This December marks the 70th anniversary of the Universal Declaration of Human Rights.

“My Husband's Secret to Making Millions”