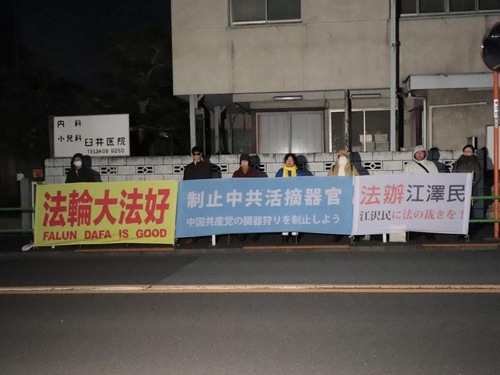 Peaceful protest across from the Chinese embassy in Japan

Some practitioners stood on the sidewalk across from the embassy and held banners worded “Falun Dafa is good. Stop the CCP's Live Organ Harvesting, Bring Jiang Zemin to Justice.” To leave room for pedestrians, the other practitioners sat in the garden. 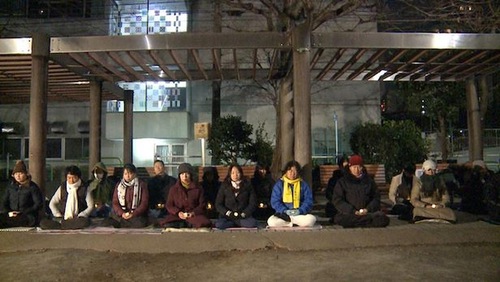 Some practitioners sit in the garden.

Practitioner Koichi Sadashi has participated in protests in front of the embassy for more than 12 years. She said she wished that more people were aware of the persecution and would help stop it. Koichi started practicing Falun Gong in 1999. She originally could not read a single word but learned how by following other practitioners in group study. Half a year later, she could read Dafa books on her own.

Ms. Li, who has been persecuted in China for practicing Falun Gong, came to Japan in 2015. She said, “The CCP's persecution is inhumane. Its crime of state-sanctioned live organ harvesting must stop.

“Some practitioners who were in Zhejiang Women's Prison with me were released after I left. I learned from Minghui.org that they were arrested and incarcerated again later. They have been imprisoned multiple times during the past 18 years of the persecution.”

She said she treasured the freedom in Japan and participated in the protest to help stop the persecution in China.

Practitioner Tanimoto Asako has participated in protests in front of the embassy since 2011. She said she weeps whenever she reads reports of the persecution on the Minghui website. “The thought of rescuing the practitioners incarcerated in China motivates me to participate in the event. I sincerely hope they will be freed as soon as possible,” she said.

A young practitioner, Mr. Mao, said, “Falun Gong is being brutally persecuted in China. I hope to inform the CCP through the embassy that the persecution of Falun Gong is unlawful.

“Everyone should do something to help stop the persecution.”

“I Learned How to Search Inward”

Latest Podcast
Podcast (Cultivation): “I Rescued My Mom Only After I Cultivated Righteous Thoughts”
- Jan 06, 2018