Painful Memories of a 16-Year-Old Girl

(Minghui.org) My name is Xu Xinyang, I’m 16, and I am from China. While I was growing up, I felt I was different than other children. I remember when I was very young that my mother often put me in the care of relatives or at a friend's house and then left in a rush. 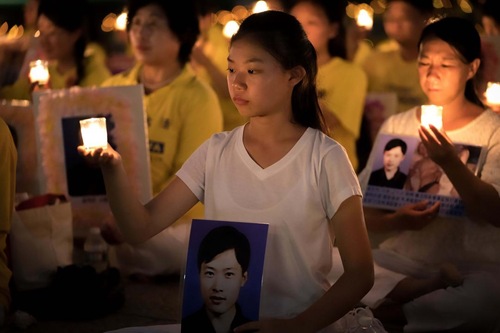 16-year-old Xu Xinyang holding her father Xu Dawei’s picture. Mr. Xu was illegally sentenced to eight years of imprisonment and passed away 13 days after his release.

I missed my mother. Every time she left, I would be crying in a corner. I wanted to be with my mother so much and I was afraid of her leaving me. Every time I saw my mother, I would hear her talking with her friends about my father.

I had never seen my father. Who was he? What did he look like? Why did my mother want to restore my father’s name? What crime did he commit that got him in jail? The most frequent words I heard were “exposing the evil,” “dangerous,” “police car,” and “be safe.”

As I grew up, I got to know more about my father from my mother. His name was Xu Dawei. He was very honest. He was born in 1974 and used to be a chef. In 1996, he read the book Zhuan Falun, lived by the principles of Truthfulness-Compassion-Forbearance, and cultivated Falun Gong. My parents met and fell in love in 1997. They got married on May 12, 2000.

Jiang Zemin (former head of the Chinese Communist Party) gave the order to eradicate Falun Gong on July 20, 1999, and arrested many Falun Gong practitioners. Falun Gong was slandered in China. My parents started printing materials to tell other people about Falun Gong and how it was being persecuted.

For printing these materials, my parents were arrested in February 2001 by police from Shenyang, Liaoning Province. My father was brutally tortured and was sentenced to eight years in prison.

My mother was locked in an interrogation room. Two guards struck my mother’s head, face, and back. She told me that she was dizzy and vomited from the torture. At that time, my parents had been married for eight months and my mother was pregnant.

After a month in detention, my mother was allowed probation for her pregnancy. When she tried to visit my father in jail, she was not allowed to see him.

An inmate could not stand to see my father tortured and called my mother and shared the details. He told her that the guards instigated inmates to stab my father’s fingers and toes with needles. My father was shocked with electric batons. Guards stuffed cleaning rags into my father’s mouth so that he couldn’t scream or shout.

My father refused to give up his belief, so he was secretly rotated among four prisons in Liaoning Province. My pregnant mother ran from one prison to another.

When I was four months old, my mother was arrested again and sent to a so-called rehabilitation center. After nine days of torture, she was on the verge of death and released.

Thirteen Days with My Father

When I was seven I remember the first time I met my father in prison. He saw me and wanted to hold me. I knew this person was a very important person to my mother. He was the person my mother wanted to see the most. He was my family, but I didn’t know him. I was scared. I hid in my mother’s arms and would not let him hold me. This is the biggest regret of my life.

The second time I saw my father was when I was eight. He came home after eight years in jail. I was afraid of getting close to him because his body was covered with scars. He had a hard time breathing. Sometimes his mind was clear, sometimes not. My mother was worried and anxious. She did not know what to do.

After my father was home for 11 days, my mother took him to a hospital. Two days later, my father left us forever.

Within less than 100 days, my mother had lost four of her closest family members – her brother, father, husband, and mother. They were not able to survive the brutal persecution and passed away one after another. I cannot find the words to describe my mother’s mental state in those days. I felt so tiny and helpless. I just hid in a corner looking at things around me, scared.

Because of my father’s passing, my mother went to different places to clarify the truth. I was often forced to transfer schools. From the time I was eight, life was very unsettled. My mother was arrested because she sought redress for my father.

When I was in the third grade, I already had been to four different schools. Later, I lived at school. On weekends, my mother’s friends would pick me up and take me to their homes. Each time, it seemed like a different person picked me up.

My mother ran everywhere for my father’s sake. I did not see her often. Sometimes, I saw her for a moment and then she had to leave right away. I remember once very clearly that my mother was taking me to school. When we were almost there, I so wished that time would slow down. I wished to be with her for a bit longer. When it was time for her to leave, I still said to her, “Mom, you can go now.” I knew in my heart that she was doing a very righteous thing.

Mom left. I did not want to turn around to see her. I wanted to give her the impression of a strong girl. The moment I turned around, I could not hold back my tears any longer. I cried.

The fourth school I went to was Xiongshi School in Shenyang. My teachers were mostly Falun Gong practitioners. On weekends, I was able to see my mom again. Because of father’s matter, my mother spent most of her time in Shenyang at that time. I was happy and thought that I finally would have a place to stay and study.

Fortunate Not to Become an Orphan

One day, a classmate told me that she saw on the Minghui website that Mr. Xu Dawei had passed away as a result of the persecution and that his wife had been arrested.

I was scared. I went outside to the patio and cried. My classmate came out and I said to her, “I don’t know what to do. My mother was arrested. My father died. Will I be an orphan? I don’t have anything left.” I went to my teacher asking about my mother. She comforted me. “Your mother is fine.”

However, my mother did get arrested. She was released 20 days later on the verge of death. I was fortunate to not become an orphan.

Although I lived at Xiongshi School, I did not feel as sad as I had when I was in the other schools. It felt like a family with my teachers and schoolmates. Every day, we studied traditional Chinese culture and etiquette. Although we had some conflicts, we would try our best to overcome the difficulties.

My Teacher Never Came Back

On a very nice morning—the day before my birthday—I told my teacher, “Tomorrow is my birthday.” My teacher said she would prepare a birthday gift for me.

The next day, I waited and waited. Soon I heard that my teacher had been taken away and nobody knew where she was. A substitute teacher came and taught us that day. Even though the weekend was coming up, everyone still wanted to wait for our teacher after school.

The next morning, we heard that the police would come to our cafeteria around noon to put up posters slandering Falun Dafa. I joined a group of my classmates and fled from school.

As noon approached, we called classmates who were still at school. They told us the police might come and they asked us not to come back. Our homes are all far from the school, so we took trains. After three to four hours on the train, I got home.

It was dark when I called my mother. “Mom, can you find a place for me to stay? Something happened at school.” I cried. I was afraid our phones were being tapped, so I didn’t say more. My mother understood and said, “Don’t go anywhere. I will find somebody to pick you up.”

From that day on, I had nightmares. At night, I wanted someone to hold my hand so I could fall asleep.

Later, I heard that the police took away many of my classmates. A male classmate named Ba Guan was deprived of sleep of four days by the police. They forced him to tell who our teacher had contacted. He was very scared and collapsed mentally. After he went home, he passed away. There was a report about him on Minghui website.

Most of my childhood was filled with fear and the need to escape. I was not able to go to the school I really liked anymore. Because of my father, my mother was wanted by the police. The police also kept looking for me.

When I was 12, my mother and I escaped to Thailand. Even there, we were not free of fear. The police once almost took my mother to an immigration prison.

I was fortunate to come to the United States, a country that protects freedom of belief. I am no longer afraid the police will take my mother away. I no longer need to worry about being arrested, tortured, or becoming an orphan.

The brutal persecution continues today. There are still many children in China who have had experiences similar to mine. They are not as fortunate as I was to come to America.

Fellow Villagers Sign Petition Seeking Justice for Xu Dawei, Who Died as a Result of Persecution

Mr. Xu Dawei Cruelly Tortured in Prison Before He Died

Xu Dawei Dies Due to Abuse in Detention, Family Seeks Justice but Is Intimidated by the Authorities