(Minghui.org) Falun Gong practitioners from the Atlanta area gathered at the University of Georgia (UGA) on September 18 and 19, 2017, to raise awareness among students and faculty members about the Chinese Communist Party's suppression of Falun Gong over the past 18 years. More than 1,000 students, faculty, and staff members signed petitions condemning the persecution.

Influenced by the Chinese Consulate, the Chinese Students Association (CSA) planned activities to interfere with the event but were ultimately unsuccessful.

Recognized as a “Public Ivy,” the University of Georgia is the largest university in the State of Georgia and currently has about 1,000 students from China. 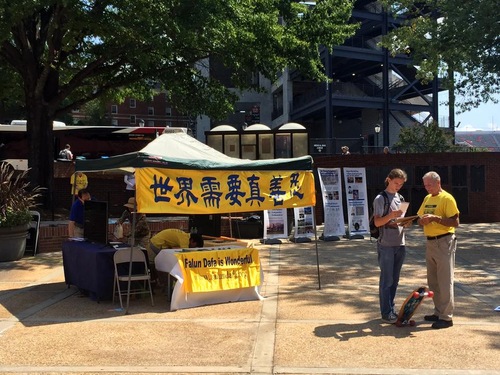 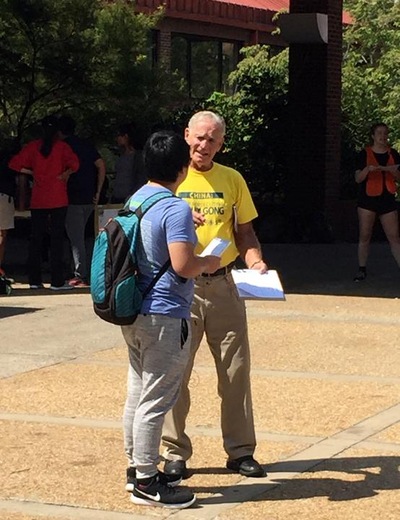 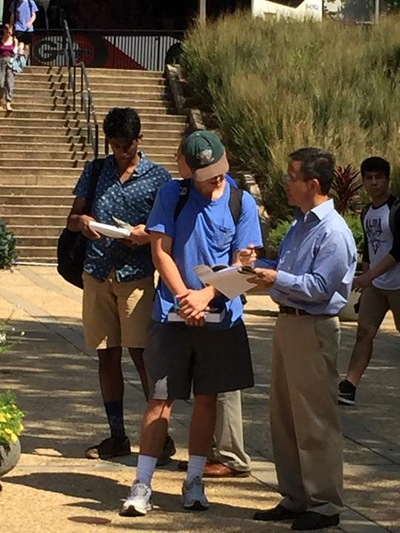 Falun Gong practitioners talk to passersby at the University of Georgia on September 18 and 19, 2017, about the meditation practice and the persecution in China.

Outside the Tate Student Center, practitioners set up a tent and displayed banners and posters about Falun Gong and the ongoing persecution in China. Through reading the materials and talking with practitioners, many passersby were surprised to learn about the various tortures inflicted by the communist regime on practitioners in China for their beliefs. Many expressed a will to help practitioners by signing a petition calling for an end to the brutalities. Others with a strong interest in meditation systems learned how to do the exercises during the event.

Tom, one of the practitioners who coordinated the event, said that over 1,000 signatures were collected during the two-day event. Those who signed included faculty and staff members, and students from Georgia, other states, and overseas. “These petitions will be forwarded to the offices of Johnny Isakson and David Perdue, two Georgia senators, so that they can follow up with legislators urging a stop to the brutality in China.”

Jessie, a student from South Korea with Chinese heritage, said that the suppression “absolutely” needed to stop, and signed the petition without hesitation. Azima, a student from India, added her signature and said she would look into the matter further on the Internet.

Stephanie, a coordinator for a student organization, signed the petition and later asked her friends Ursula and Helen to do the same. “We can't allow such a crime to continue,” she remarked. 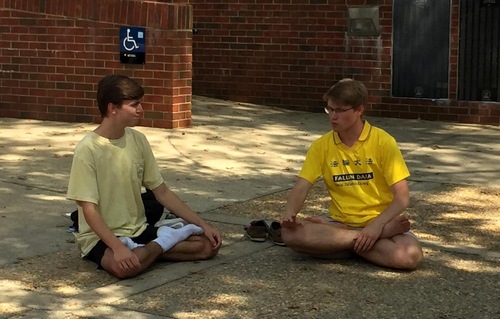 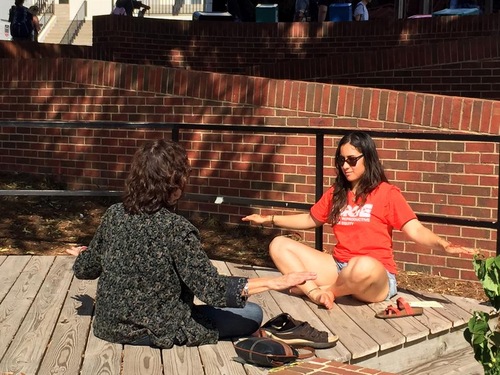 Students were interested in learning the Falun Gong exercises.

The Chinese Students Association (CSA), a campus organization with close ties to the Chinese Consulate, made several attempts to recruit students to undermine the practitioners' event.

The notices also included a link to a Google document that asked for “volunteers” to protest: “We need more support—even if you just show up and cannot stay there.”

This notice was quickly reported to the FBI branch in Atlanta. An officer said they would pay close attention to it, and take appropriate actions against any who would violate human rights, commit hate crimes, or work for overseas communist governments.

Tom said that quite a few Chinese students showed up during the two days, and many accepted materials from practitioners. “We did not see protests as those encouraged by CSA's notices,” he said. “In fact, from following up discussions on WeChat, it seems that very few students were willing to participate in activities backed up by the Chinese consulate.”

Mr. Sun observed, “When the Chinese Consulate tells students not to come to Falun Gong practitioners' event, or [tries to] mobilize them for a protest, it may trigger students' curiosity to find out what is really going on, as we have seen during these two days.”

“Here I do encourage Chinese students to see with their own eyes and develop independent thinking,” added Mr. Sun. “Since we are already here in the land of freedom, why not stay out of the Chinese Consulate's influence and become a clear-headed person?”

“Illegal Acts Committed by Cao Shuwen of the 610 Office”