(Minghui.org) Danish Falun Gong practitioner Wei Zaiqun and her husband Jan Eckhausen recently received a letter from the Danish government expressing condolences regarding Zaiqun's brother-in-law, Chen Guangzhong, who died while in police custody, on July 28, 2017. At a rally in downtown Copenhagen, Wei Zaiqun called for the release of her two sisters, who are detained in China for their beliefs.

Support from Ministry of Foreign Affairs

Erik Laursen, head of the Department of Asia in the Ministry of Foreign Affairs, wrote the letter on August 4 to Zaiqun, her husband, and the Falun Dafa Association of Denmark. After Chen's death, the Falun Dafa Association contacted the Denmark Prime Minister and the Minister of Foreign Affairs, on August 2, after an earlier communication on July 24.

In his letter, Laursen expressed deep condolences to the family about Chen's death. In a Foreign Affairs meeting on September 16 last year, former Minister Kristian Jensen promised to pay close attention to the human rights conditions in China. This included bilateral discussions between the two counties which occurred when the Prime Minister and the Minister of Foreign Affairs visited China earlier this year. 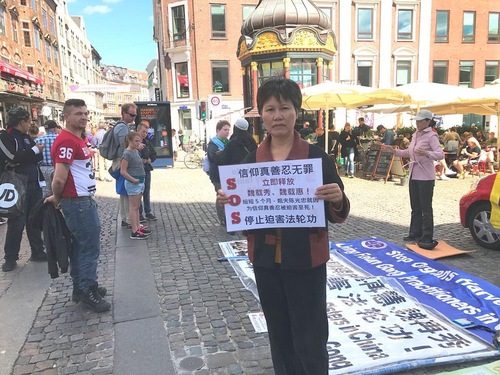 In a rally in downtown Copenhagen, Wei Zaiqun urged the release of her two sisters detained in China. Her brother-in-law Chen Guangzhon died in police custody on July 28, 2017.

The Denmark government also worked with the European Union to raise this issue during human rights talks in Brussels on June 22-23 of this year. One motion discussed in the meeting was the mistreatment of Falun Gong practitioners in China, as proposed by the Denmark government.

Laursen said that he and the government would monitor the matter, including the detainment of Zaiqun's sisters in China.

Died Within Six Months of Detention

Wei Zaiqun's two sisters, Wei Zaihui and Wei Zaixiu, were both arrested on May 27, 2015. Both were sentenced to seven years of imprisonment and are currently still in prison. Zaihui's husband, Chen Guangzhong, was also detained, on February 9, 2016, and later sentenced to a three-year prison term.

Zaiqun and her family recently heard that both Zaihui and Chen were in a life-threatening condition. The doctor said that Chen could die at any time, since his pupils had dilated.

Inside the prison hospital, Chen's brother saw Chen lying in bed, pale and unconscious. He was nearly naked and hair had been removed. He did not respond when being called by name. The guards prohibited his family from taking photos. He passed away several days later on July 28. 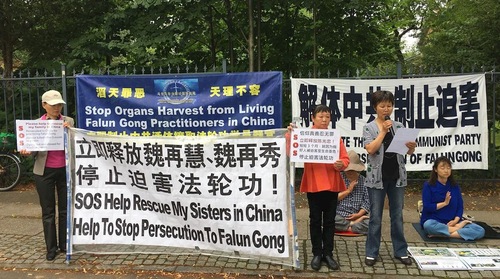 Wei Zaiqun spoke at an event in front of Chinese Embassy on July 27, 2017, one day before her brother-in-law Chen died in a prison hospital.

After her family was detained in China more than two years ago, Zaiqun began contacting government officials and attending rallies, urging their release. She also told people about the positive changes Falun Gong brought to the family.

Zaiqun heard about Falun Gong from her friends in Denmark in 2006. She recalled, “My slipped disc, frozen shoulder, skin disease, and many other illnesses were all cured not long after that.” Upon hearing her story, both her sisters also became practitioners. They no longer needed medicines, and also became more sincere and helpful toward others.

Chen had been severely injured in an accident, which led to memory loss, high blood pressure, and other problems. Zaiqun said, “The practice of Falun Gong helped him regain his life, and gave our family a happy life, but now the Communist Party has taken all of that away, including Chen's life.”