(Minghui.org) Around three hundred Falun Dafa practitioners from New York and neighboring regions gathered on July 16, 2017 for an English-language experience sharing conference in downtown Manhattan. Nineteen practitioners gave heartfelt speeches about their cultivation experiences, including looking within, eliminating attachments, and clarifying the truth about Falun Dafa and the persecution. 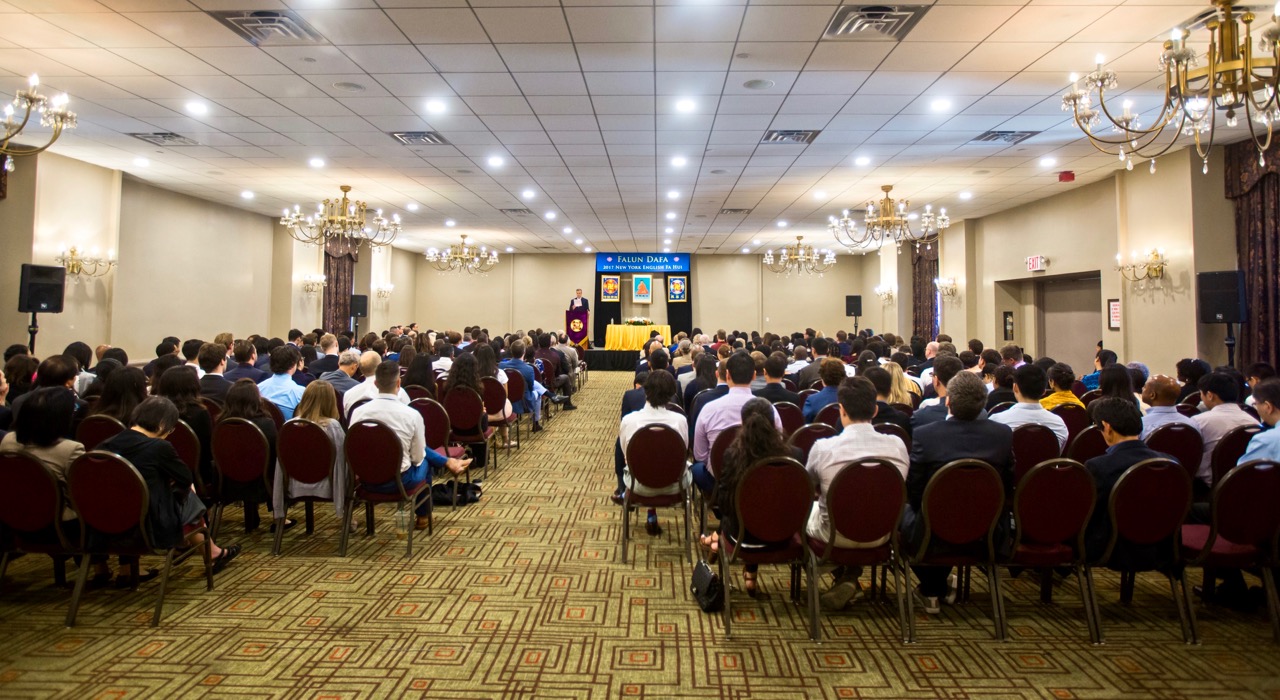 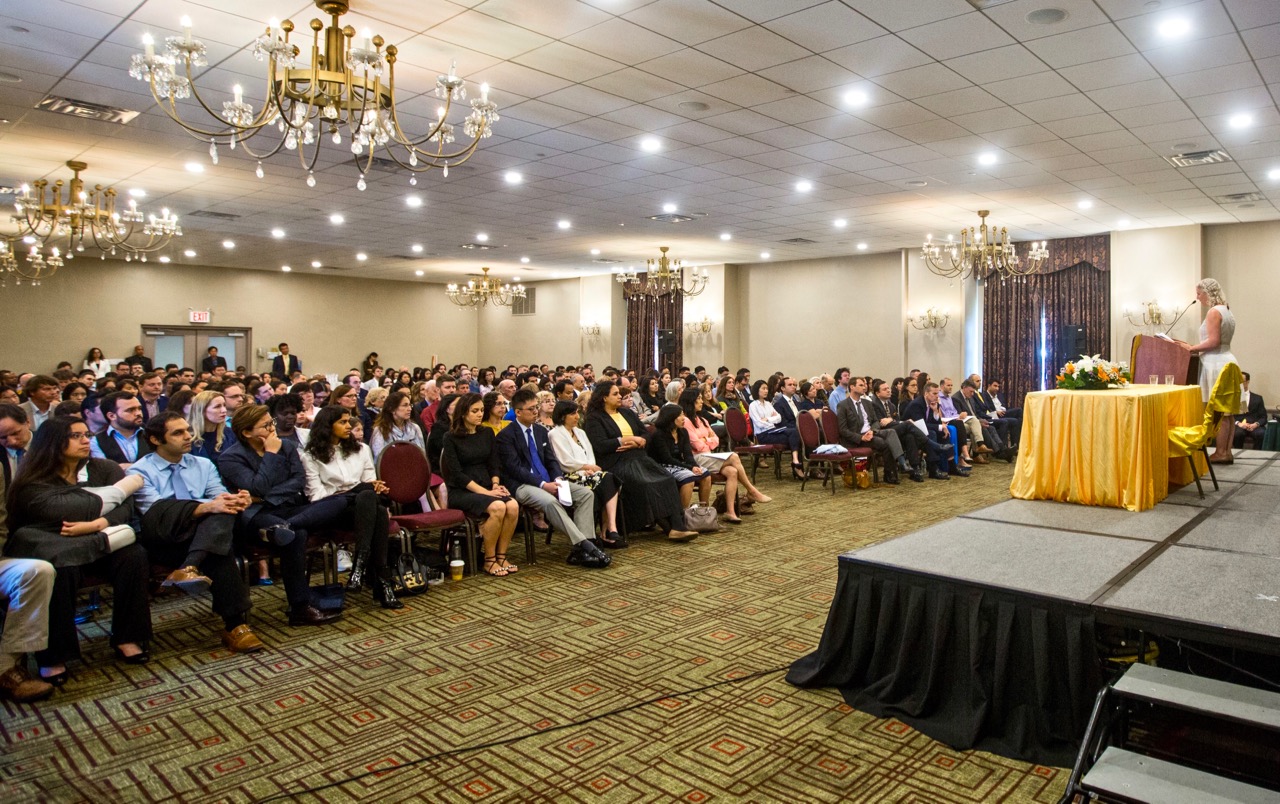 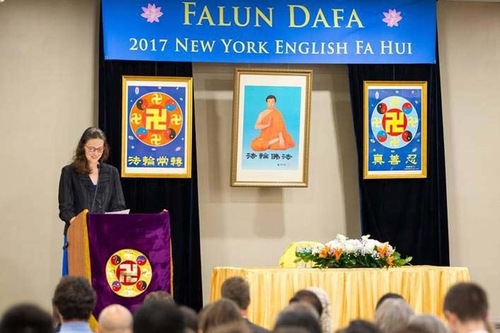 One practitioner recounted an incident when she had a wound from a nasty burn on her inner thigh that oozed pus. One day, while in despair, she cried out to Master, “What should I do?”

She heard a clear voice in her head: “Do what you need to do, not what you want to do.”

As a result, her thoughts changed. She felt immensely grateful to have Master to guide her. Through diligent cultivation, her attachments to sentimentality, affection, and lust became weaker, and a thick brown scab grew over the wound. Her mother was so amazed that she declared she would practice Falun Dafa too.

Realizing the importance of cherishing every moment, she said the first thing and the last thing she does every day is to thank Master for giving her the opportunity to cultivate and save sentient beings. 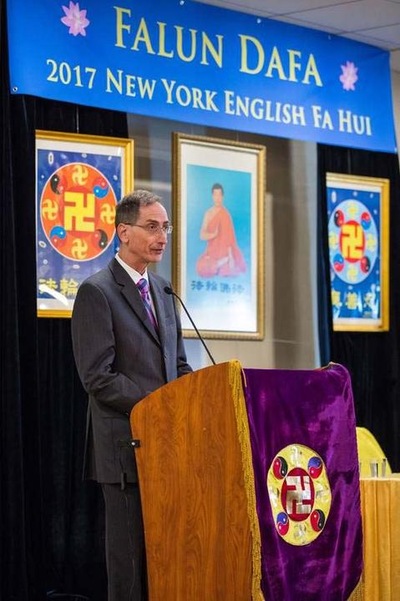 Another practitioner shared about a physical tribulation with his feet. His ankle and feet had swelled, and his big toe became purple and black. His feet were in immense pain, which made it almost impossible to walk, and difficult to sleep. He was forced to leave his job, and helped with Dafa projects remotely from home.

People encouraged him to get an amputation, but he stood firm and said, “I am a Dafa disciple!”

He said, “Every moment, no matter how much pain there was, and not knowing when this tribulation would ever end, I always remembered that I am a Dafa disciple, and that Master is watching over and taking care of me.”

Over time, with the support of fellow practitioners, his toes began to heal. The black portions of the toes eventually came off and the dead tissue began to heal.

Doctors told him he was a “medical miracle.” During this period, he reflected on many shortcomings and attachments that may have caused this tribulation, including his disdain for fellow practitioners, his lustful thought karma, and his becoming more lax after he left a media project. 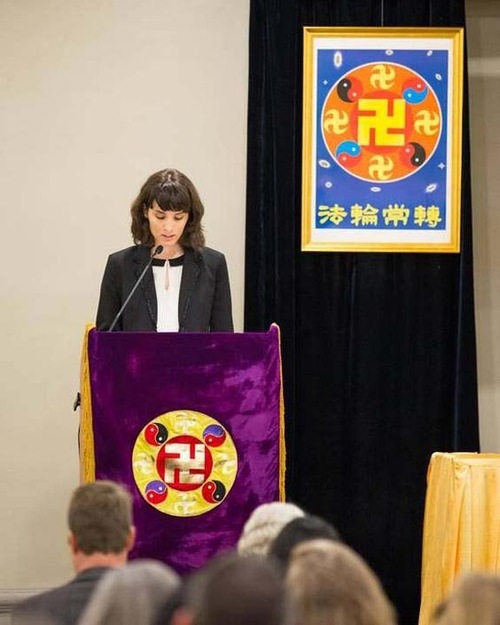 One practitioner shared about overcoming the attachments of fear and jealousy. When she started practicing Dafa with her sister back in Slovakia 11 years ago, her father had been adamantly against it. He shouted at her and even beat her. She realized that her attachments—her fear, sentimentality, ego, and her attachment to fighting with her father—had caused her father to behave poorly. After she continued talking to him about Falun Dafa, her father became supportive of Dafa and her work at the Epoch Times.

Coming to work at the Epoch Times in New York City, she experienced strong jealousy toward a more skillful coworker, and she often felt treated unfairly. This jealousy made her depressed when her work was received poorly. But realizing this was an attachment, she strived to be more respectful of her coworker from her heart. 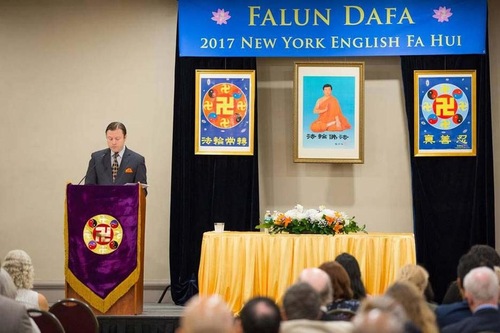 Another practitioner shared about a kind of immense anxiety, a fear of everything crashing down. He realized this fear, this panic of not doing well, was not his true self, and was actually the result of a lack of true faith in the divine, since his divine self would know exactly what to do.

Once when he was sending forth righteous thoughts in the middle of the night, a thought emerged in his mind: “Seek no fame and no reward.” He realized he had a strong attachment to self-validation as well as a calculative and scientific mentality that always made him skeptical and uncertain. 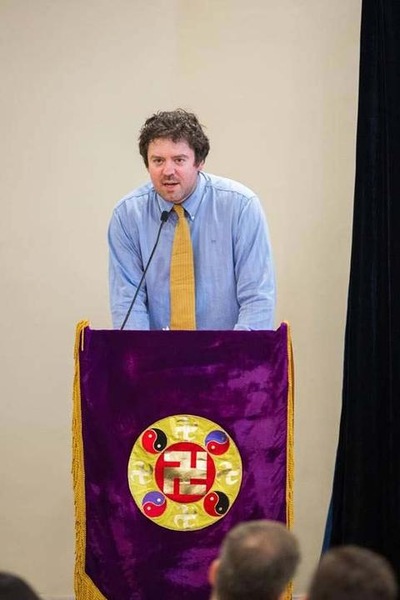 When one practitioner first started working for NTD (New Tang Dynasty) in 2005, he did not have any complaints about the cramped working situation or the lack of pay.

But as time went on, he became attached to his own ideas. “The more things did not work out at the TV station, the more resentful and jaded I became, thinking we were on a failing path and that the situation would not improve.” He eventually left the media.

He moved to Taiwan with his Taiwanese wife, but he developed a profound loneliness even though he was with his family. And it became even worse after he moved back to New York when his best friend and fellow practitioner died suddenly of a heart attack. He became resentful of his circumstances, and it shook his faith.

But he realizes now that in all these years, he had failed to grasp the concept of loss and gain, and the idea that suffering is good. “As I went through the enlightening process, I resolved to be more like the junior monk who cooks the meals rather than the senior monk.”

Looking back on his cultivation path, he said, “These are experiences I very much treasure, those chances to clarify the truth and assist Master in saving sentient beings are truly more precious than pearls.”

Learning to Clarify the Truth to Mainland Chinese

One practitioner, who was born in China but came to the U.S. when she was three, shared about overcoming her fear of clarifying the truth to mainland Chinese people. She had always been shy, and although she had become more comfortable in talking to Westerners about Falun Dafa over the years, she was still scared of talking to Chinese people, especially in Mandarin, which she had a limited grasp of.

Zhang said, “When I looked inside, I realized I had been relying on my human skills to talk to people about Dafa.”

She realized that her fear of talking to Chinese people was actually selfishness, because she was focusing her attention on herself rather than the sentient beings she wanted to save.

She also found that over time, clarifying the truth became almost like a reflex, “like I was checking off things on a mental list.” She did not have the same heart to save people. “I had forgotten that the people I was talking to were all sentient beings who had come here for Dafa, and were infinitely precious.”

Growing Up with Dafa

One practitioner started practicing Falun Dafa when she was only seven years old, in France, with her father. “Growing up, I knew Dafa was very good, but I wasn’t practicing it for myself,” she said. She was simply following along with her parents. As a teenager she wanted to enjoy her youth and have fun like other teenagers. But this changed when she joined a group Fa study for young practitioners when she was sixteen years old.

“The environment helped me to take cultivation more seriously, as I had more heart to study Zhuan Falun, and really tried to understand the content and the principles explained within.” She became more involved in truth-clarification projects, and later came to New York.

She expressed her gratitude to Master for his boundless compassion and for always giving her opportunities to improve despite her mistakes.

She said, “As a cultivator who took on the tremendous and sacred mission to save sentient beings, I am now and once again, fully reminded to not let Master down, and to walk my path well in a more straight and dignified way in the remaining time ahead.”

“U.S. Lawmakers Voice Support for Falun Gong on 18th Anniversary of the Persecution”