March and Rally in Melbourne Expose Persecution of Falun Gong

(Minghui.org) On July 15, Falun Gong practitioners in Melbourne staged a march and rally on the eve of the 18th year of the peaceful resistance against the persecution of Falun Gong in China. During the rally, practitioners, elected officials, and community leaders called upon the international community to join them in calling for a stop to the persecution. 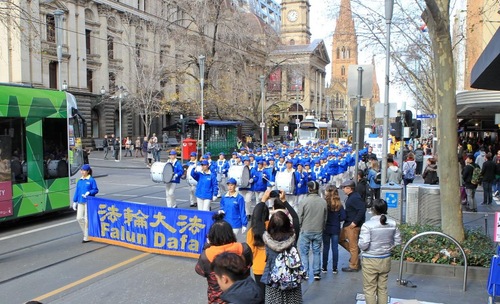 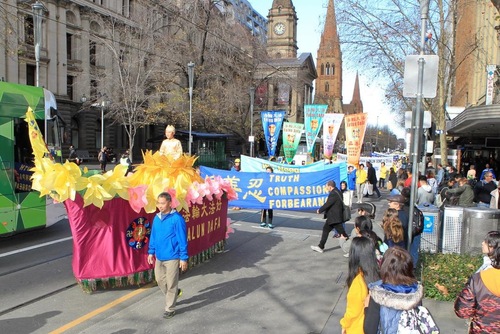 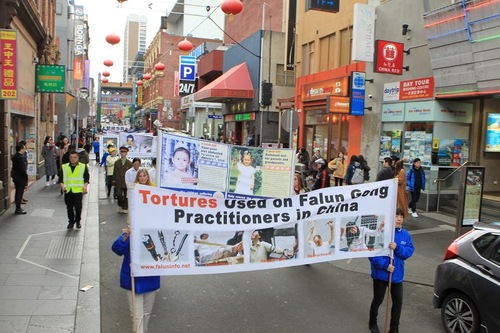 March in Melbourne to raise awareness of Falun Gong's 18 years of peaceful resistance to the persecution in China. 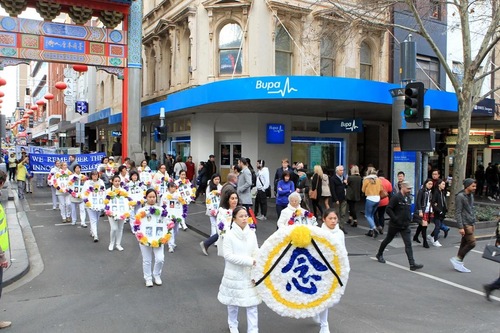 Commemorating those who lost lives in the persecution. 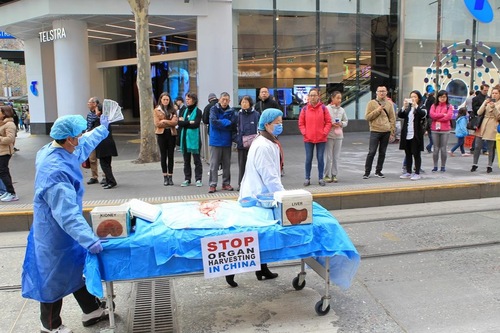 During the march, which passed through the downtown business district and Chinatown, practitioners demonstrated the exercises, exposed the brutal facts of the persecution, and called on the public to recognize the true nature of the communist party.

Before and after the march, practitioners collected signatures on a petition condemning the forced organ harvesting in China. People from all walks of life showed their support by signing the petition.

Caroline Cell, a local fashion designer, had heard about the state-sanctioned organ harvesting in China.

“It's crazy,” she commented. “Falun Gong follows the principles of truthfulness, compassion, and forbearance. But they have been tortured for doing this. This is ridiculous.”

Caroline thought that the practitioners' activity to inform the public about what is going on in China is a good thing, especially as it gives people an opportunity to help.

He believes that the signature collection is necessary. “The petition can pressure the Australian government to take action. Many governments in the world only focus on money and trade, and ignore the morality issue,” Mr. Cooman said. “I feel that I've done too little about the forced organ harvesting. I will try to tell my friends and family about this crime.”

After the march, the practitioners held a rally in front of the State Library. Members of Parliament and community leaders gave speeches and expressed their support for Falun Gong's peaceful resistance to the persecution. 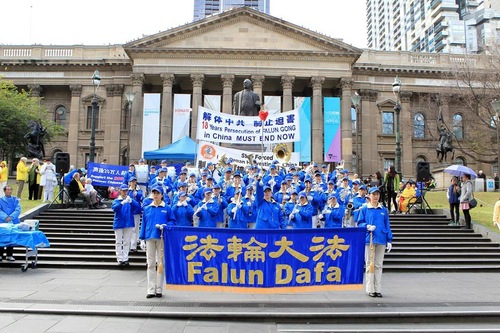 The Tian Guo Marching Band performs before the rally. 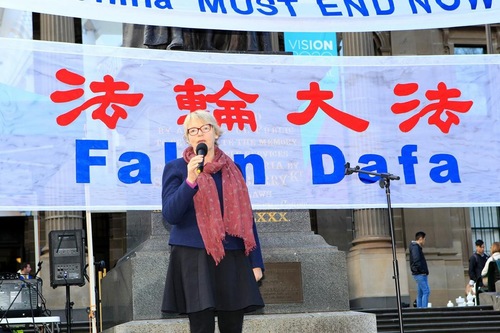 Janet Rice, Member of Parliament (Australian Greens), said in her speech that it is a crime to ignore the forced organ harvesting and that those who don't step up to do something about it are accomplices. 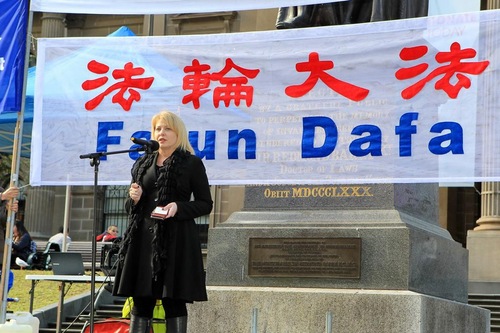 Rachel Carling-Jenkins, Australian Conservatives Representative for the Western Metropolitan Region of the Upper House of the Victorian Parliament, called upon her colleagues in Parliament to speak out for Falun Gong. 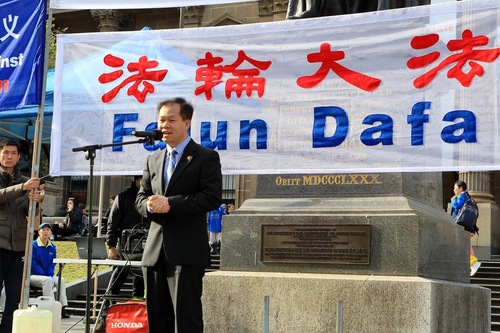 Bon Nguyen, a leader of the local Vietnamese community, praised the peacefulness of Falun Gong and called upon Australians to pay more attention to the human rights abuses in China. 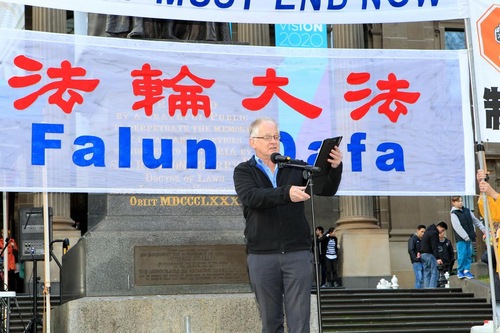 Gerard Flood, formerly of the Democratic Labor Party of Victoria, called for investigation into the forced organ harvesting in China and for bringing the criminals to justice. 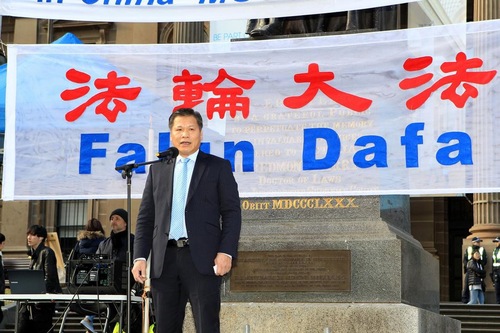 Ruan Jie, a Chinese democracy movement activist, believes that the international community should exert pressure on the communist party when it comes to human rights issues.

Leigh Smith from the Coalition to Investigate the Persecution of Falun Gong reviewed the facts of the state-sanctioned organ harvesting in China. She told the attendees at the rally that the recent documentary about this issue, Harvested Alive, will be screened publicly in Melbourne this August. 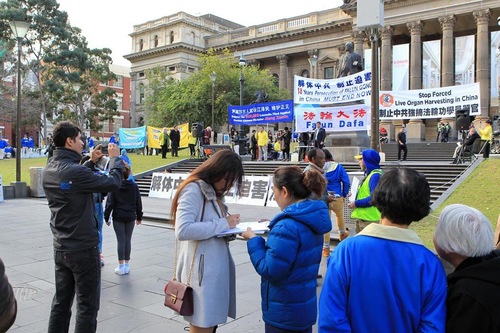 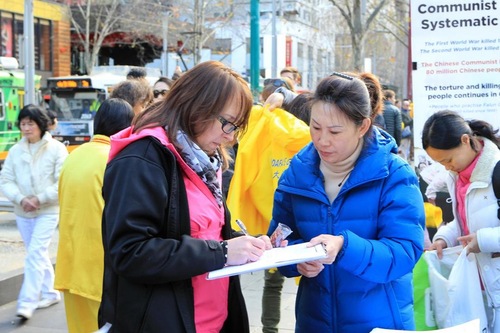 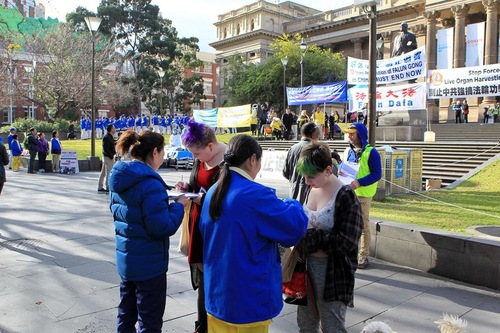 “Southwest Germany: Raising Awareness of the Persecution of Falun Gong”