Falun Dafa (also known as Falun Gong) was first introduced to the public by Master Li Hongzhi on May 13, 1992. The practice has spread to over 100 countries over the past 25 years, and more than 100 million people benefit from practicing it.

Ever since May 13 was established as “World Falun Dafa Day,” Falun Dafa practitioners all over the world have held events in May to celebrate and express their appreciation to Master Li. 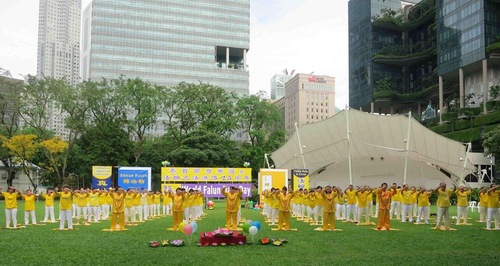 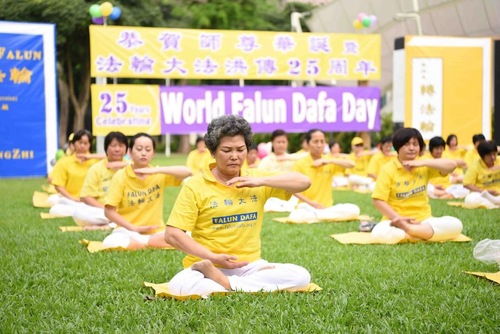 Practitioners do the exercises together in Hong Lim Park on May 2 to celebrate World Falun Dafa Day. 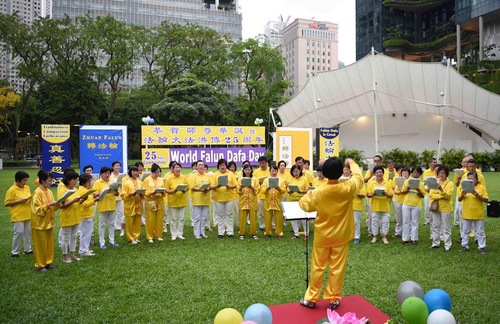 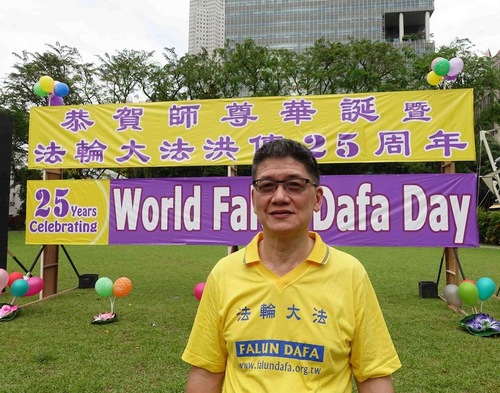 Mr. Decheng Bai is 60 years old, but looks much younger and walks with a light step. He is a taxi driver and has practiced Falun Dafa for over five years. No one would imagine such a happy man used to live in misery.

His family was extremely poor when he was young. His mother was the sole support for their family of nine. After he grew up, he remained poor and then became addicted to gambling. He went bankrupt and was often on the run to evade creditors. His life was immensely stressful. He moved eleven times and was imprisoned twice.

Bai said, “I was afraid of looking in a mirror before I started practicing Falun Gong. What I did every day was unspeakable. I was afraid of being seen just walking down the street.”

He thought of suicide several times. Then, by chance, he came across a copy of Zhuan Falun, the main book of Falun Dafa. He was on the verge of a mental breakdown and couldn’t finish reading it.

Bai said, “I was all alone, and nobody believed me. I was exhausted, mentally and physically. But I had this feeling that only the book Zhuan Falun could rescue me. I carried the book with me and read it whenever possible.

“I saw hope when I read the book. I don't remember how many times I read it. A magical power manifested in my body. I felt light and refreshed. My situation was desperate, but I was not in despair.

“During the past five years, I have read the Dafa books, done the exercises, and raised awareness about the persecution, plus worked, ate, and slept. No matter how difficult it is or how tired I am, I treasure the time to read Dafa books. I have read Zhuan Falun over 150 times, and also read Master's other teachings.

“I drive my taxi and have seldom taken a day off in the past five years. I remind myself that I am a practitioner and must follow Truthfulness-Compassion-Forbearance with whomever I meet or whatever problem I run into. I always smile to greet passengers and deal with them sincerely. I talk with them about Falun Gong whenever there is an opportunity.

“I return any items left in my taxi as soon as possible, as I know the owner will be anxious. My company and passengers have praised me for doing this again and again.”

Bai's problems were solved after he started practicing Falun Gong. He bought a home, and his family now trusts and respects him. In observing World Falun Dafa Day, Bai said, “I appreciate Master every day. I must study the Fa, send righteous thoughts, and raise awareness every day. I will cultivate diligently and help more people learn about Falun Gong and benefit from practicing it.” 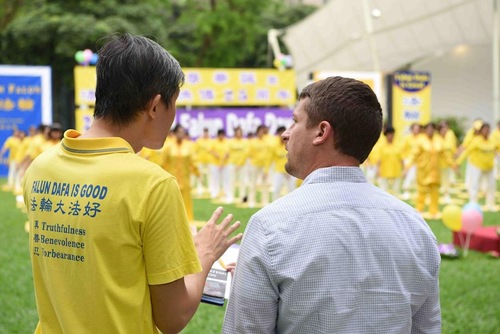 A passerby learns about Falun Gong at the World Falun Dafa Day celebration in Hong Lim Park on May 2. 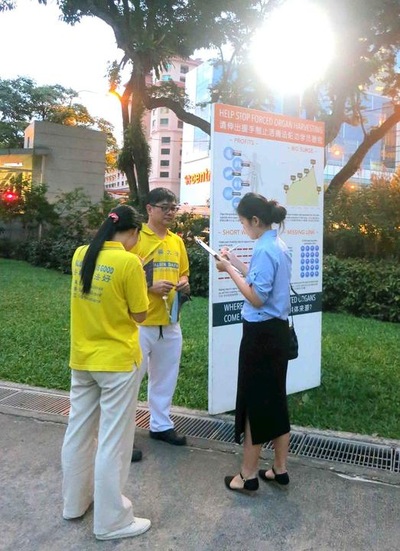 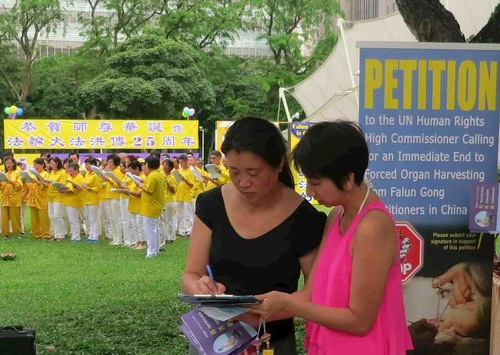 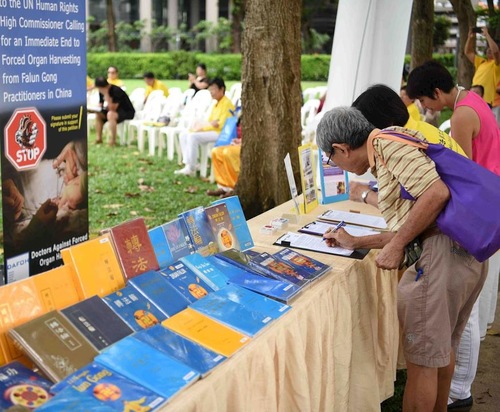 Signing the petition to condemn the persecution after learning about Falun Gong and why the Chinese communist regime persecutes the practice.

Nicolas, an undergraduate student from Germany, was drawn to the practitioners' yellow T-shirts. After listening to a practitioner's explanation, he said, “This is the first time I’ve ever heard about Falun Gong. It makes me feel good.” He said that following Truthfulness-Compassion-Forbearance is important.

As a German, Nicolas said he understood firsthand about the violence in a communist country. Before the collapse of the Berlin Wall, people in East Germany yearned to go to West Germany to escape communism. He said, “The Chinese Communist Party (CCP) does not respect human rights. Chinese people yearn for freedom.” He signed a petition protesting the CCP's state-sanctioned live organ harvesting and said he hoped the persecution would end soon.

Vincent, a veteran from Spain, was visiting Singapore with his wife when they came upon the practitioners’ celebration. They listened to a practitioner's explanation and then sat down to watch the exercise demonstration.

He said that he admired the practitioners’ peaceful protests in the face of the CCP's brutal persecution. He said, “This is different from other rallies. People usually shout in protest.” He said the peacefulness of the event drew people in.