Practitioners Learn from Each at Ottawa Experience Sharing Conference

(Minghui.org) The 2017 Ottawa Falun Dafa Cultivation Experience Sharing Conference was held at the University of Ottawa on April 30. Thirteen practitioners talked about how they improved themselves and helped others by following the principles of Falun Dafa, Truthfulness-Compassion-Forbearance. 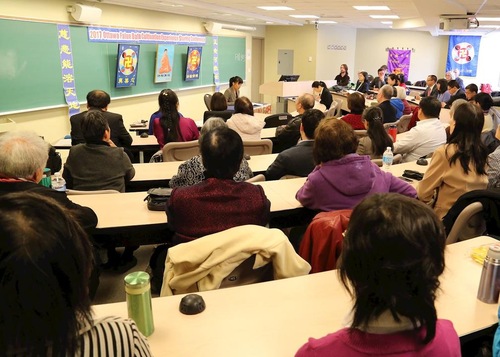 The 2017 Falun Dafa Experience Sharing Conference at the University of Ottawa on April 30.

Mr. Lei said he gained a deeper understanding of cultivation practice from events related to Shen Yun. During the recent Shen Yun performance in Ottawa, the equipment had issues during the first show. All practitioners sent forth righteous thoughts to support and some practitioners in other regions also provided full assistance, resolving the problem in time. “The show was a full house that evening, with many proclamations received from the Prime Minister, Governor General, and mayor.” He also learned to let go of jealousy when working with others.

Ms. Qiao talked about her experience of preparing Shen Yun promotion materials and the program book. “The coordinator paid a lot of attention to detail and it was very challenging to work with him. Later I realized that it was I who needed to let go of myself and be considerate of others, because everything we do is to save people.” During this process, Ms. Qiao also learned to maintain a mindset of gratitude and sincerity. By cherishing each opportunity and always being willing to learn, she was able to improve the collaboration with the coordinator.

To help the Shen Yun tour performances, Ms. Lu traveled to many cities in Canada and the United States. “One time, the setting of a theater was not ideal and it caused lots of issues for the performance. We worked together on it and sent forth righteous, and the performances were able to proceed smoothly.” In another city, she had conflicts with the coordinator. By looking within, she shifted from a mentality of complaint to thoughtfulness towards others, and the following work also went well. 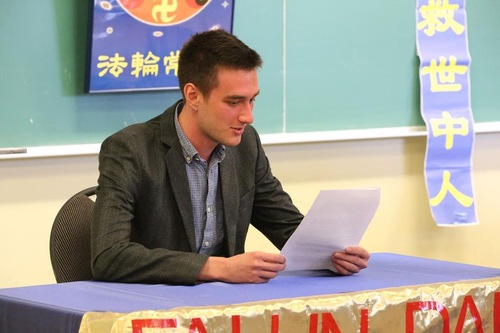 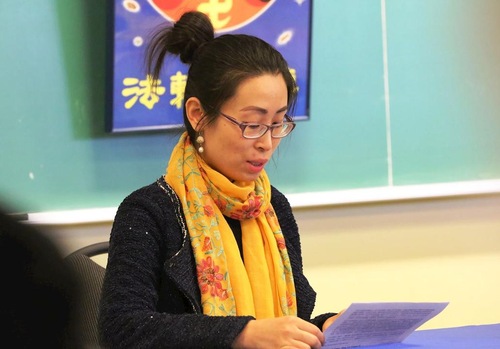 Thirteen practitioners talked about how they have applied the principles of Truthfulness-Compassion-Forbearance in daily life.

Etienne, 24, encountered Falun Dafa practitioners during a National Day celebration last year. “The practice seemed very appealing and special to me, so I began to read Zhuan Falun that evening.” He gained many new understandings from Dafa's teachings and also had some interesting experiences.

Last year, he took part in the efforts to promote Shen Yun by visiting businesses and talking them about the performance. “In front of one store, I saw a bluebird arrive and fly around the Shen Yun pamphlet. As I moved to another street, the same bird was still following and hovering around the pamphlets.” He realized that Shen Yun is very sacred and is a great way of saving sentient beings. Etienne also shared how he stopped playing video games and let go of attachments to social media.

Susan from Québec is also a new practitioner. Realizing the importance of Fa-study, she began to memorize and hand copy Dafa books. This helped her gain more understandings and overcome difficulties. Despite the freezing winter days in Canada, she was able to distribute Shen Yun pamphlets to many people, as well as introduce Shen Yun at shopping malls.

Cultivating While Working in the News Media

A practitioner who works in the news media talked about how her team helped with Shen Yun reporting. “For many years, we mainly relied on a reporter from another city to cover Shen Yun reporting in Ottawa. This year it is different because that reporter cannot make it.” As a result, she prepared well in advance, and other practitioners also supported her and helped send forth righteous thoughts. “Things worked out well in the end. From this I also learned the importance of having faith in Master and Dafa,” she said.

Chan talked about her work for the English version of The Epoch Times over the past 12 years. “One of the challenges for me was the feeling of loneliness,” she recalled. Through continued Fa-study, she found her own cultivation path, and was able to let go of human notions including jealousy. “Another difficulty for me is to get rid of influence from the communist party culture. When that happens, I usually place the Fa as the highest priority and the problems are resolved.

After the conference, many practitioners said that they had learned a lot from the sharing. “By working together as one body, we can do better as Dafa disciples to help Master with the Fa-rectification,” remarked one practitioner.

““Practicing Falun Dafa Helps Me Return to the Origin””