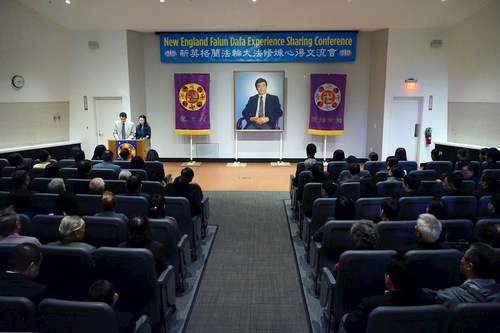 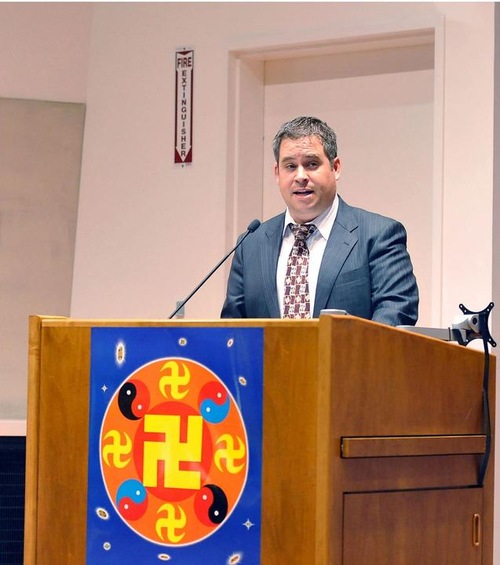 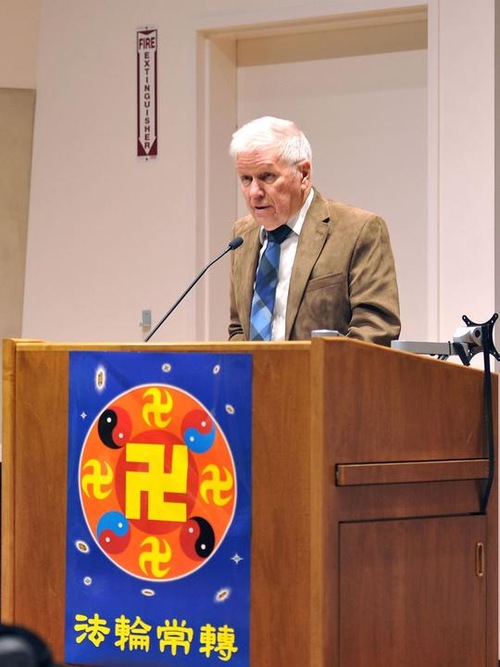 Practitioners speak about their cultivation experiences.

The first speaker was a Westerner who had heard about Falun Gong on TV news while studying in China. In 2003, he watched a show aired on the Cambridge TV station in Boston, which portrayed Falun Gong in a much different light than the propaganda program he had seen in China earlier.

He cried. A few days later, he printed out a whole copy of Zhuan Falun (the main book of Falun Gong) and found the local group exercise site.

He later started to slack off. He looked inward and found that he was too self-centered. He hopes, through communicating with fellow practitioners, to be able to get rid of this attachment and cultivate like when he first started.

Another Western practitioner's speech was on the same topic. He said that cultivation has healed his anxiety. He always tries to treat himself as a beginner; he reads Zhuan Falun carefully and without pursuing new realizations, only focusing on what he is reading. He said that this way of studying has brought about great changes in him.

Mr. Ma, a young musician, talked about how cultivation helps him in music composition.

“Before I started cultivating, my attention was spent on how to make the music exciting and stimulating to the flesh body.

Now, what I have in mind is how to get rid of attachments to fame and profit, and how to validate Dafa using my music.”

“I see that every note is like an energetic life. What I need to do is to naturally express what I see, but not to drive the notes to do what I want them to do.

When I can reach this realm, my music becomes touching and full of energy.”

Mr. Ma said he shared this understanding of music that he had gained from cultivation with his professors. They said he has reached very high spiritual level and that they could not give further suggestions or guidance. They encouraged Mr. Ma to compose more music this way.

Ms. Wu, who began practicing in 1997, shared her experiences of learning English and forcing herself to talk to strangers in English when promoting Shen Yun.

Ms. Wu memorized a lot of sentences and overcame the language-related difficulties while selling Shen Yun tickets by herself in shopping malls.

Once, she talked to a gentleman, who, after hearing her introduction to Shen Yun, invited her to submit a job application to Macy's. Ms. Wu did, and she got the job.

Last January, Ms. Wu took a long period off from Macy's for Shen Yun promotion. When she came back to Macy's, to her surprise, she had been promoted to department manager.

Ms. Liu said she is an honest person and always speaks what is in her heart. However, she never thought about the meaning of real compassion and real forbearance. She has a short temper and often ran into conflicts with family members.

Ms. Liu looked inward deeply for the roots of the problem. She said, “I found that the aggression in my life is really stubborn. No matter how I send forth righteous thoughts, I could not get rid of it. I suffer from the aggression every day. I cannot eat or sleep.”

“Finally, I realized that violence is a reflection of cowardliness. It shows that one is despaired over reality. Its roots are in the attachments to comfort and sentimentality.”

“When I saw what aggression really was, I was able to get rid of it.”

One attendee said, “When I heard a speaker talking about jealousy, I thought of myself. When I heard one fellow practitioner's story, I realized that she has worked very hard. When I saw how other practitioners prioritize cultivation, I saw my shortcomings. This conference really encouraged me to be more diligent in cultivation.”

Another attendee said she cried from the beginning to the end. She said that she has encountered many difficulties and tests recently, and that the speeches purified her heart and gave her energy with which to overcome the difficulties.

“Practitioners Learn from Each at Ottawa Experience Sharing Conference”