(Minghui.org) Falun Gong practitioners held activities to raise awareness of the persecution of Falun Gong in Karlaplan, Stockholm over two weeks in late March and early April 2017. Karlaplan is an open park-plaza area in Östermalm, Stockholm where many wealthy people live.

The practitioners held the events near the Karlaplan subway station on Mondays and Fridays over the two weeks. As they demonstrated the Falun Gong exercises, the melodious music and peaceful movements drew the attention of passersby. 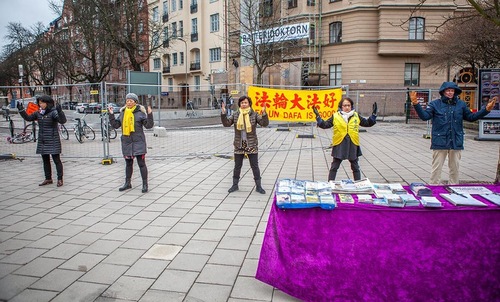 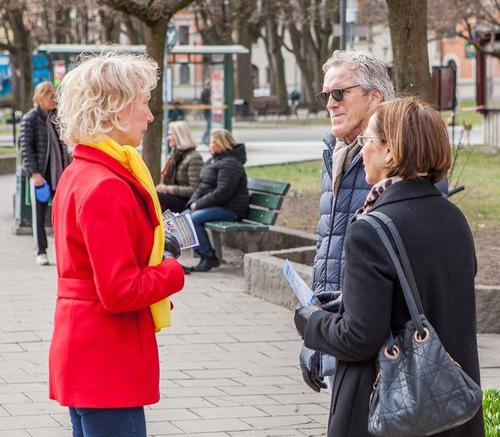 A group of middle-school students read the poster boards to find out more about Falun Gong. Some took photos and imitated the hand gestures of the practitioners demonstrating the exercises. Upon learning about the Chinese Communist Party's (CCP) persecution, they signed the petition opposing the brutality.

Some residents imitate the practitioners demonstrating the Falun Gong exercises.

One lady read the poster boards carefully and signed the petition opposing the CCP's state-sanctioned organ harvesting from living Falun Gong practitioners. A practitioner recognized that she was the former Minister for Culture and Sports, Lena Adelsohn Liljeroth, and greeted her. She was pleased to chat with the practitioner. 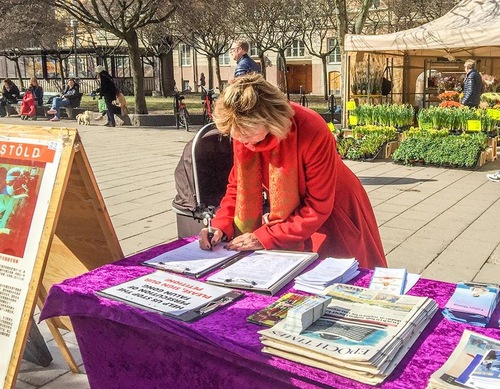 A retired surgeon stopped to talk with practitioners to find out more. Upon hearing about the CCP's forced organ harvesting, she said, “I believe it is true. I worked in the Karolinska University hospital before I retired. My supervisor went to China to attend a workshop on organ transplantation. He talked about similar incidents in China. It is horrible!

“I am a doctor. I know how hard it is to find a matching organ. I dare to say the live organ harvesting is not an individual incident but a government-coordinated crime!” She said that she had been paying close attention to the CCP's human rights abuses.

An elderly couple who enjoy qigong imitated the hand gestures of the practitioners demonstrating the exercises. They said that they felt a strong energy field and wished to learn Falun Gong.

The gentleman said that he was in a local qigong association with over 90 members. He took the phone number of a practitioner so that he could arrange for them to teach Falun Gong to the association.

“Police Officers Moved to Tears by a Woman's Persecution Story”