(Minghui.org) Over 2,000 Falun Dafa practitioners gathered in Flushing, New York City on April 23, 2017 to commemorate the large-scale gathering of practitioners in Beijing on April 25, 1999, which took place three months before the persecution of Falun Dafa officially began. 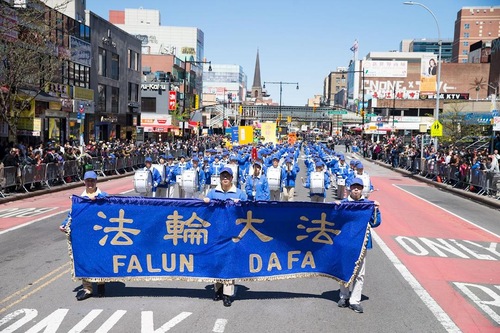 The Tian Guo Marching Band performs in Flushing on April 23, 2017. 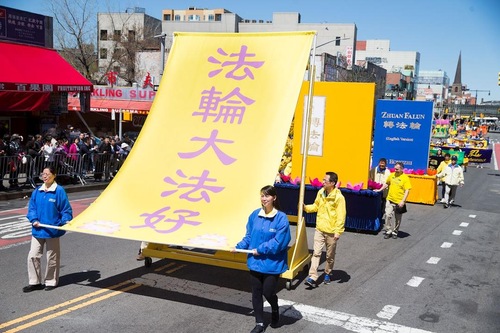 Banner with the words “Falun Dafa is good”

After approximately 50 Falun Gong practitioners were illegally arrested in Tianjin in April 1999, about 10,000 practitioners gathered peacefully in nearby Beijing on April 25 to appeal to the central government for their release. Zhu Rongji, then-Premier of China, met with practitioners and agreed to release those arrested in Tianjin. However, Communist Party leader Jiang Zemin nonetheless banned Falun Dafa three months later in July and started a brutal nationwide persecution.

The 200-strong Tian Guo Marching Band led the first section of the parade, themed “Falun Dafa is good.” With banners, a float, and a demonstration of the Falun Dafa exercises, the performances attracted thousands of spectators.

Judith Harrison, commander of the 109th Precinct, led other police officers in covering the event. When the dragon and lion dances passed by, she asked an officer to take a picture of her with the march in the background. She posted the photo on the police department's Twitter account later in the day, she wrote, “It was a beautiful day!” 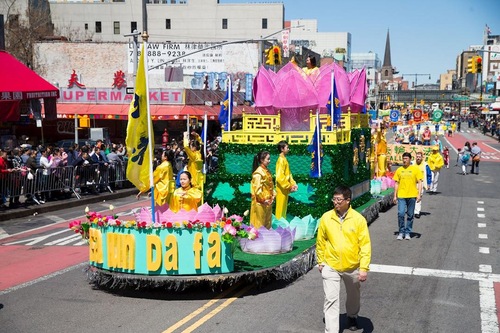 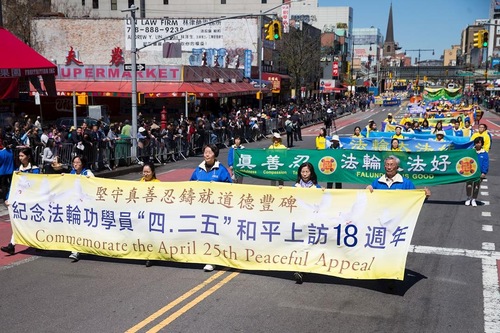 The second section of the march called to end the persecution of Falun Dafa in China. The third section aimed to raise awareness of the Tuidang movement to quit the Chinese Communist Party (CCP) and its youth organizations. “Because the CCP has been harming people for decades, anyone who sides with the regime could face serious consequences,” explained Yi Rong, coordinator of the Global Service Center for Quitting the CCP. “Fortunately, over 270 million Chinese have quit the Party,” he said.

Lu Dong, a representative for a Christian organization, said he was glad to come and support Falun Dafa practitioners. Another member, Lin Sheng, held a banner that read, “Persecuting Falun Dafa is a crime, and forced organ harvesting is vicious.” Lin said he “hopes more people will pay attention to this [issue].” 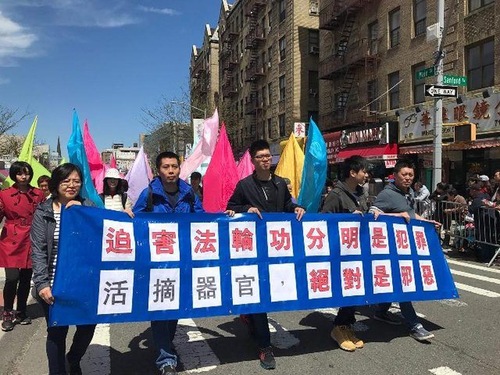 A Christian group joined the march in support of practitioners.

Having witnessed an event in 2008 in which about 300 pro-CCP people surrounded and attacked practitioners, Lu said he was glad to see that the situation has improved significantly. “We all know that justice will prevail,” he remarked. 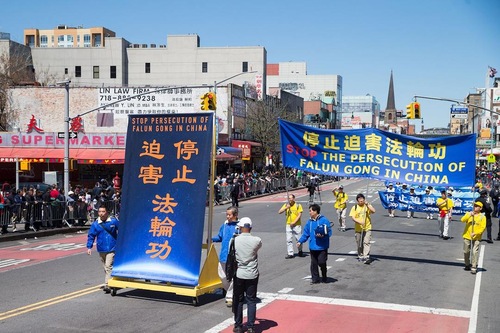 A banner calls to stop the persecution. 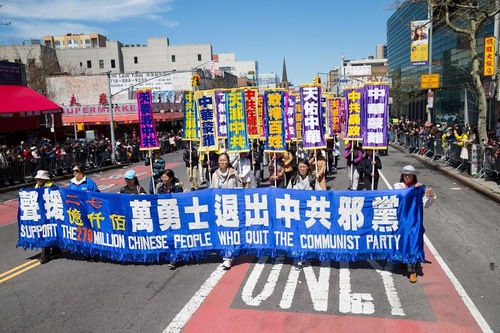 Dai, a passerby, said that he was familiar with the violence and deception with which the CCP has treated the Chinese people in previous political campaigns. “That is why when I first heard about this in 1999, I knew Falun Dafa was being wronged.” He said he felt bad because many Chinese people, including some living overseas, are still influenced by CCP propaganda.

William, who immigrated to the U.S. more than 30 years ago, said he always stands with practitioners: “Many people like me know right and wrong. Although we are not sure how to help, we do hope you will keep bringing awareness about the persecution until it is over.”

Practitioners held a rally in downtown Flushing near the Queens Library after the march, followed by a candlelight vigil. “We have witnessed how Falun Dafa and the principles of Truthfulness-Compassion-Forbearance can change a person for the better. And it happens to each of us,” said practitioner Hou Mingyu.

Li, one passerby who watched the event, said he was touched by the courage of practitioners in upholding their belief: “The positive energy will continue to spread and gradually change the world.”

On April 25, 1999, approximately 10,000 Falun Gong practitioners gathered to protest peacefully on the streets of Beijing after the unexplained arrest of some 50 fellow practitioners in the nearby city of Tianjin. The location was adjacent to the Central Appeals Office, where they hoped their case would be heard. Police on hand directed them to line up on several streets in the area, also home to Zhongnanhai, the Party’s central government compound.

But Party leader Jiang Zemin had his propaganda ministry publicize the gathering not as the peaceful protest that it was, but instead as a “siege of Zhongnanhai,” the central government compound. This propaganda stunt was used to turn public opinion against Falun Gong, and as an excuse for launching the brutal crackdown that began just a few months later. Nearly 18 years of persecution have continued ever since.

“Firm Belief in the Fa Makes a Difference”