(Minghui.org) The 2017 Benelux (Belgium, the Netherlands, Luxembourg) Falun Dafa Experience Sharing Conference was held on October 29 in Utrecht. Eleven practitioners shared how they benefited from the practice and talked about their experiences with looking within and improving their character. 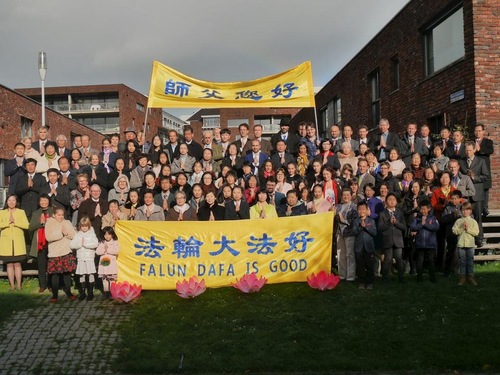 Experiencing the Meaning of Cultivation During Fa-rectification 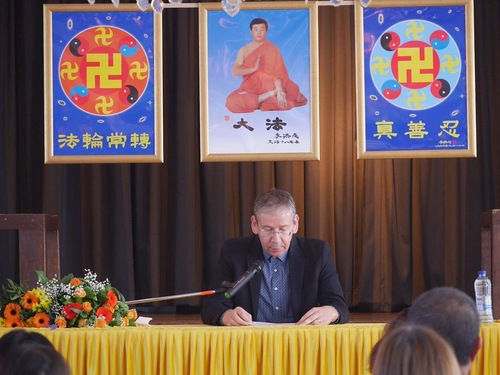 Peter speaks at the conference.

Peter became a Falun Dafa (also known as Falun Gong) practitioner in 1999 and learned the meaning of cultivation during Fa-rectification. He was once the main coordinator for a Dafa project. “During that time, I was always full of energy and passionate about what I did. I helped people understand what Falun Gong is and at the same time helped the new practitioners with their cultivation, answering their questions.” As the number of practitioners increased, the work required him to focus more on his interpersonal skills. Also during that time, he'd gotten married and started a family. With the increasing pressure from his job, he was unable to spend as much time on Dafa work. At a low point in his cultivation, he stopped being a coordinator.

Peter talked about what made him stay in Dafa and remain steadfast in his cultivation. Even without experiencing miracles, supernormal experiences, or having his Celestial Eye open, Peter said that he knew he had benefited from the practice because he could successfully balance his day-to-day life.

In the end, people noted that he’d still been working very hard to be as enthusiastic in the practice as he was when he first became a practitioner. “I tried to be the kind of practitioner I wanted others to be when I was a coordinator. In other words, I tried to do what other coordinators asked me to do, without having second thoughts. I've tried to support them and give them suggestions and opinions when they needed them.”

Another practitioner, Silvio shared that he had traveled around the world to find the way to be close to God. In 2000 he found Falun Dafa. He understood that even the slightest upgrade in his character was positive improvement. Once, when he and a fellow practitioner were working together on a Dafa project, the practitioner treated him poorly. Before he got angry, Silvio thought of Dafa's principles of Truthfulness-Compassion-Forbearance. As he calmed down, the other practitioner apologized to him.

“At first, I thought that forbearance was easy to achieve,” Silvio shared. “But deep down I have always been tolerant in an ordinary person’s way. I realized that and eliminated this notion, and an enormous change happened in my life. My relationship with my wife and family improved significantly. Other attachments, such as lust and gluttony, were much weakened. Now I want to eliminate even more attachments and become truly tolerant like a real practitioner.”

Isabelle, a mother of three, began practicing Falun Dafa in Los Angeles in 2001. She talked about seeing battles between the righteous and the evil in other dimensions when she sent righteous thoughts. She also shared how after she eliminated her attachment to her family, her dying father’s health quickly improved. 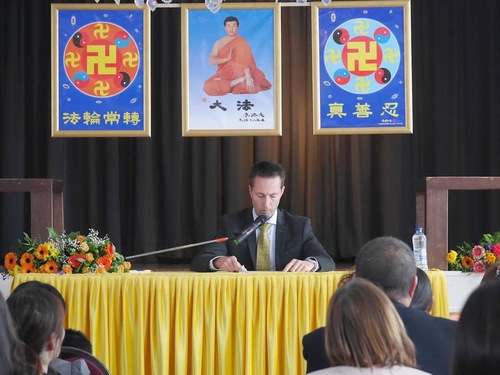 Christopher speaks at the conference.

Christopher used to be a shy and uneloquent person. Being nervous and anxious prohibited him from talking to strangers about Falun Gong. He looked within and realized that he was controlled by his fear and attachments to seeking good results and to showing off. He also didn’t seriously prepare when clarifying the truth. In order to more effectively talk to people about Falun Gong, Christopher read abundant truth-clarification materials and watched lots of videos on the persecution of Falun Gong. He would go to all kinds of events and activities to talk to people about Falun Gong and the persecution. Eventually, he conquered his fear.

Ms. Shi talked about how she got rid of the attachment to combativeness. When she used to come across tourists from China who insulted her or badmouthed Falun Gong, she would argue with them. As she studied the Fa more, Ms. Shi realized that she needed to lose the attachment to combativeness, as well as to complaining and saving face. It took her three years, but now she is able to talk easily with Chinese tourists and help them quit the Chinese Communist Party and its affiliates. 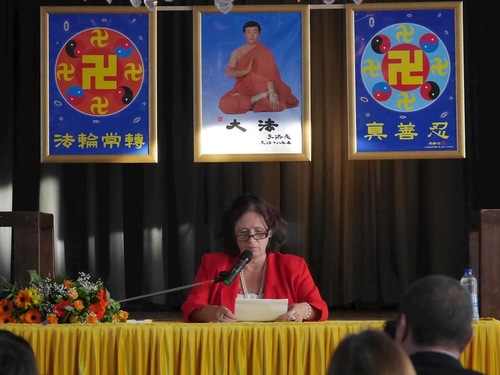 Ann Teurlings was in a car accident when she was 24. For 30 painful years, she couldn’t walk normally. Four months after she started reading the teachings of Falun Dafa, she was walking normally again. However, she still didn’t believe that she could do the sitting meditation. Ann shared how she broke through this notion with the following thoughts: “I believe in Falun Dafa one hundred percent. I eliminate my notions and attachments and think about nothing.” Ann recalled, “All I did was study the Fa and do the exercises. I improved so quickly.” Eventually, she not only could sit and meditate in the lotus position, she could even run when trying to catch a bus!