(Minghui.org) Now a familiar part of the scene at tourist sites in Munich, Falun Gong practitioners have held events over the past two years to reach out to tourists and residents alike to raise awareness of the ongoing persecution of the practice in China.

The peaceful exercises of this traditional spiritual practice from China stand in sharp contrast to the brutality of the persecution that the Chinese Communist Party has waged on Falun Gong for more than 17 years. People from around the world and from all walks of life have shown strong support for Falun Gong and for bringing an end to the persecution.

Support from Across Europe

At an Information Day held on Tal Street last Saturday, visitors from all over Europe signed a petition to condemn the brutal persecution in China.

Many people were startled to learn about the state-sanctioned organ harvesting from Falun Gong in China. Some signed the petition with tears in their eyes.

Canstani Neubart, a local physician, believes that there is a tremendous underground organ market in the world, but feels that most people do not want to face it.

“I am concerned about what is happening in the world,” she said to Falun Gong practitioners. “The forced organ harvesting must be stopped. It violates human rights, and should not exist. I believe that what has been happening is worse than what people can imagine.”

“I am glad that you are holding events like this in Munich,” she added. “I hope that more people will learn the truth. I wish you much success.”

Suzanne, a local resident, condemned the fact that the media and government have kept silent on this crime. “Many people know about the forced organ harvesting from Falun Gong practitioners in China, but they don't want to speak out. This is incredible.”

She said, “Some people are numb in the face of such brutality. Let's work together and see if we can wake them up.”

Falun Gong practitioners also provided materials in many languages for the large body of international tourists, most of whom signed the petition once they learned about what is happening in China. 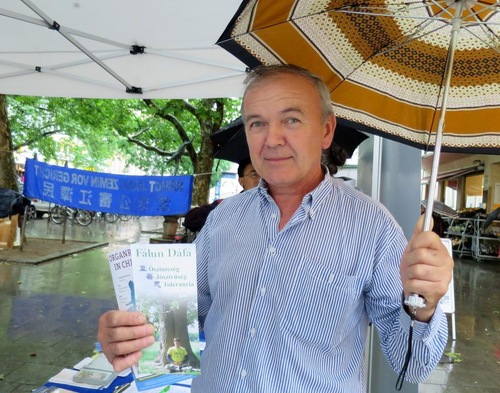 Földes Kalman, a retired Hungarian mayor said that he understands Falun Gong's situation, because his country was under the governing of the communist party too. Several young women from Hungaria also signed the petition after the mayor. 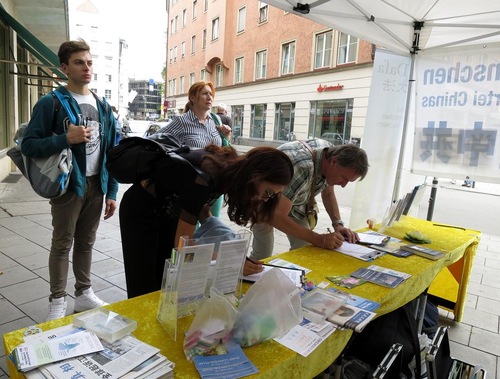 A young man (left) from Italy signed the petition and then asked his friend to sign too.

Reaching Out to Chinese Visitors

Falun Gong practitioners make a special point to reach out to visitors from China, who have long been deceived by the communist party's propaganda. It is always an eye-opener for Chinese tourists to see a group so severely suppressed at home practiced freely in Germany.

Many Chinese people, especially young people, are willing to learn about what Falun Gong really is, why the communist party persecutes the practice, and they also want to hear about the details of the forced organ harvesting.

A young man in his thirties said to practitioners, “I support you forever. Falun Gong is great! You speak for all of us Chinese.”

One young woman from China couldn't believe that the government would harvest organs from living people. “I never heard of it in China,” she countered.

A practitioner showed her the large amounts of evidence and talked to her for a long time. Finally, she was convinced. “It is so brutal,” she said. "Falun Gong practitioners should not be imprisoned. The government should release all of them.”