Days ago, Mr. Wang Zhiwen, former volunteer coordinator of the Falun Dafa Association of China was prevented by the authorities from leaving China to be reunited with his family in the U.S.

Mr. Wang had been imprisoned for nearly 16 years in China for his faith in Falun Dafa, a spiritual practice also known as Falun Gong that has been brutally persecuted in China since 1999.

Practitioners in the U.K. and Germany protested in front of the Chinese Embassy in London and Chinese Consulate in Munich, respectively on the afternoon of August 12, 2016, demanding that the Communist regime immediately return Mr. Wang's freedom and his right to travel to the U.S. They also demanded that Jiang Zemin and Zeng Qinghong, the chief perpetrators in the persecution, be brought to justice. 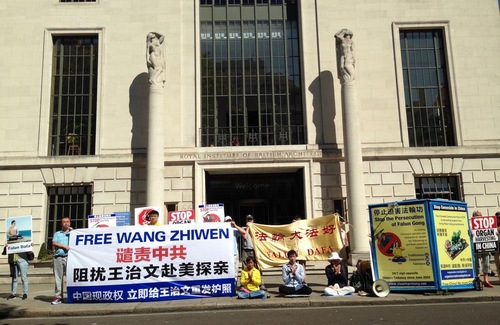 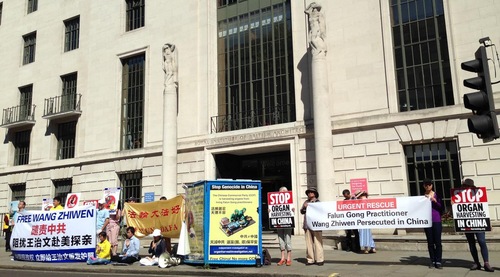 During the five-hour rally, practitioners continuously did the exercises, passed out flyers, and talked to people about the persecution.

Dr. Liu from the U.K. Falun Dafa Association said in his rally speech, “We demand the current Chinese regime to immediately reissue Mr. Wang Zhiwen's passport so that he can travel abroad freely. We also call upon governments and human rights organizations to help Mr. Wang to escape the persecution and travel to the U.S. to be reunited with his family.”

The exposure of Mr. Wang's plight has made more people aware of the persecution and the evil nature of Jiang Zemin’s gang. Many people signed petitions supporting Falun Gong. 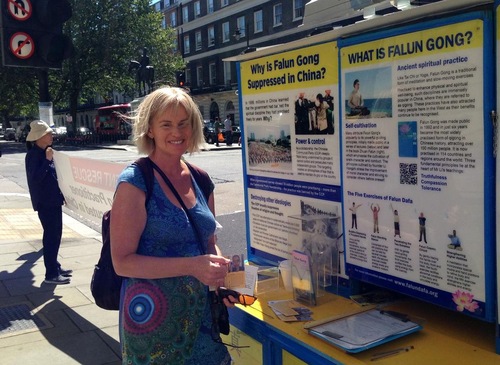 Carol, from France, had heard about Falun Gong before. Through talking to a practitioner, she said that she understood why such a peaceful practice is being suppressed by the CCP: because the CCP is afraid of people having spirituality and their own thoughts, and it fears losing control.

She asked the practitioner what she could do to help and signed a petition calling for an end to the CCP’s state-sanctioned forced organ harvesting from living Falun Gong practitioners. She said she would tell more people about the persecution. 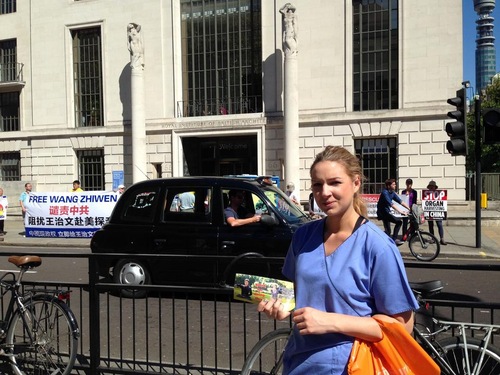 Bethan, from Wales, works at a dental clinic near the Chinese Embassy in London. She said she knew about Falun Dafa because she saw practitioners' peaceful protest in front of the embassy over the years. She had signed a petition against the persecution months ago.

Bethan was appalled by what happened to Mr. Wang. “It's unacceptable that such a thing happens in the 21st century,” she said and promised to tell her colleagues to sign the petition. 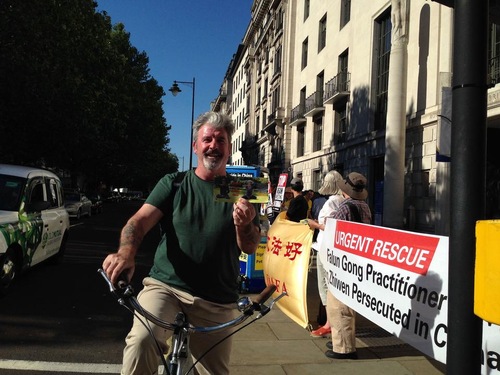 Carpenter Sid has witnessed practitioners' peaceful protest round the clock for several years. He admires practitioners' perseverance and believes that their effort to rescue Mr. Wang won't be in vain. 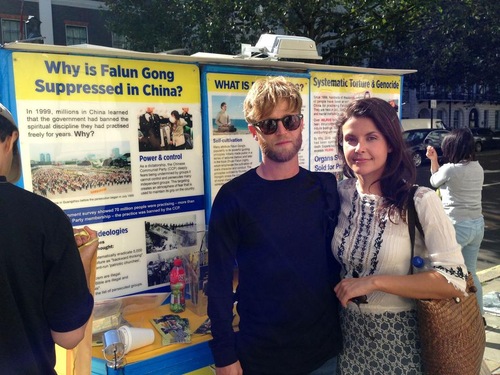 Jade and July work in Birmingham and happening upon the rally was their first exposure to the issue. They were saddened by the brutality of the persecution and signed the petition condemning the CCP's persecution of Wang Zhiwen. 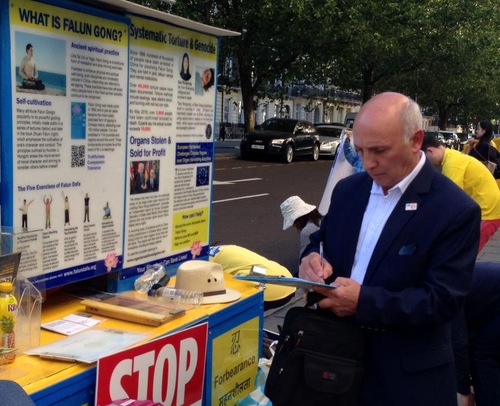 Nicolus was from Italy and has lived in the U.K. for several decades. He was attending a program at BBC nearby and came across the Falun Gong rally. He signed the petition and said he would learn more online.

A similar protest took place in Munich, Germany on the afternoon of August 12, 2016. Falun Dafa practitioners in Bavaria, Germany gathered in front of the Chinese Consulate in Munich, urging the current Chinese regime to reissue Wang Zhiwen's passport, and bring Jiang Zemin and Zeng Qinghong to justice. 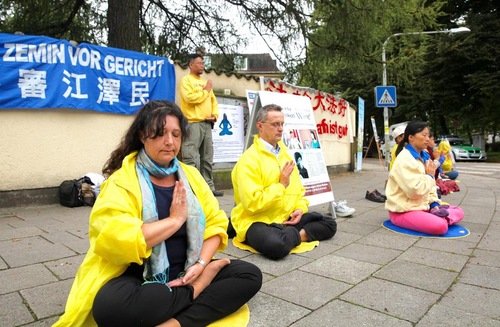 Practitioners peaceful protest in front of the Chinese Consulate in Munich, Germany, calling for freedom for Wang Zhiwen. 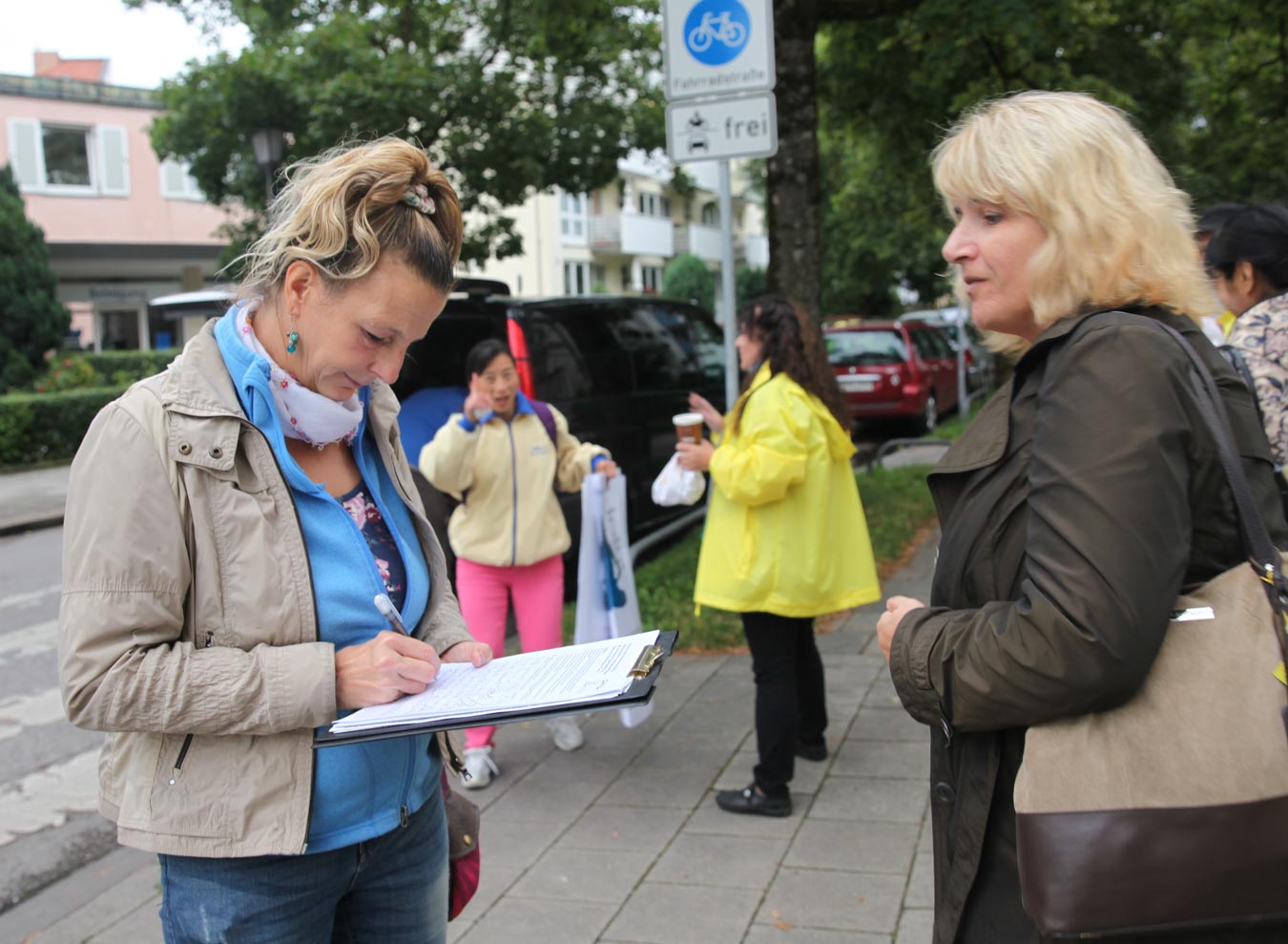 Angela Hannig is an educator in Germany who lives near the Chinese Consulate. She was shocked to hear about the CCP's forced organ harvesting from living Falun Dafa practitioners in China and immediately signed the petition calling for an end to the atrocity.

Wang Zhiwen, 67, a railway engineer and a well-known coordinator of the former China Falun Dafa Association, was arrested on July 20, 1999, and sentenced to a 16-year prison term. He was released in October 2014 and has since been under house arrest.

Wang's passport application was unexpectedly approved in January 2016. His daughter, Danielle Wang, a U.S. citizen, and her husband went to Beijing recently to help him get a visa. But the border patrol in Guangzhou, Guangdong Province revoked his passport and blocked his travel abroad, without giving a reason, on August 6, 2016, right before they tried to leave China.