(Minghui.org) Recently Beijing abruptly revoked a Falun Gong practitioner's passport just as he was leaving for the U.S. with his daughter and son-in-law. Falun Gong is a spiritual practice that has been persecuted in China for the past 17 years.

Mr. Wang Zhiwen, 67, a railway engineer and a coordinator of the former China Falun Dafa Association, was arrested on July 20, 1999. He was then sentenced to 16 years in prison for his faith. He was released in October 2014 and has since been under house arrest.

Danielle has not seen her father for 18 years because of the persecution. Her application for her father to become a U.S. resident was approved. She has not been able to contact her father since she and her husband returned to the U.S.

Falun Gong practitioners and supporters held protests on August 12 an 13 in front of the Chinese consulates and embassies in Toronto, Ottawa, and Montreal.

Protestors gathered in front of the Chinese Consulate on August 12 and held a press conference and rally in the morning. They condemned Beijing' violation of human rights and demanded that they reissue Mr. Wang's passport so that he could be reunited with his family in the U.S. 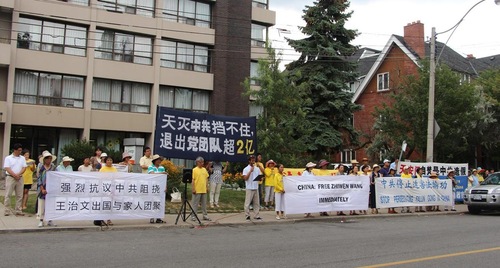 Mr. Joel Chipkar speaks at a press conference and rally in front of the Chinese Consulate in Toronto on August 12. 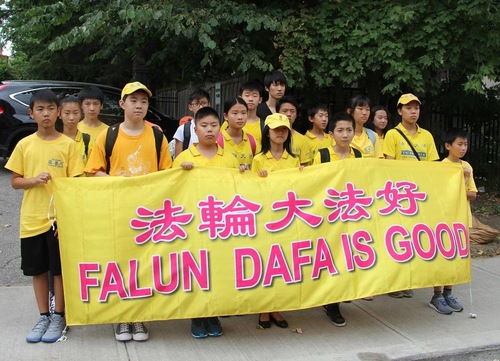 Mr. Joel Chipkar, spokesperson from Canadian Falun Dafa Association, said at the rally, “Mr. Wang was supposed to leave China on August 8 to reunite with his family overseas... Mr. Wang had a valid Chinese passport and U.S. Visa but his passport was voided right at the moment he was at the airport leaving for the U.S. Unable to leave China, Mr. Wang continues to live in the dangers of the persecution.”

“We urge the Chinese authorities to give back Mr. Wang his freedom and reissue his passport,” said Mr. Chipkar.

Rally speaker Mr. Liu Zhichun used to live in Beijing had known Mr. Wang for a long time. He described Mr. Wang as a kind and sincere person. “He's helped many people who wanted to practice Falun Gong, including me several times,” said Mr. Liu.

“A good person like him was tortured for 15 years and being monitored after he was released. He was granted a passport, which was cancelled right when he was using it to travel to the US. This again proves the Chinese regime's relentless violation of human rights,” Mr. Liu said. 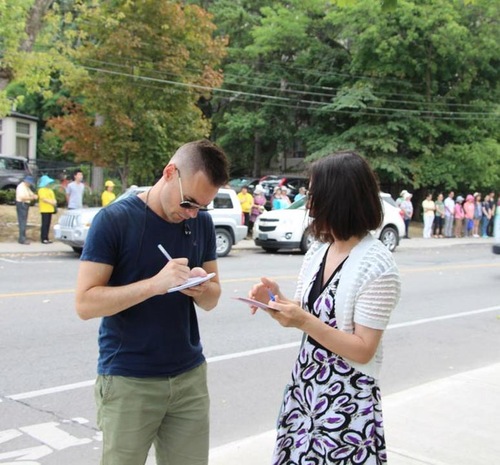 Beauclerc lives near the Chinese Consulate. He signs a petition at the rally to support the practitioners' effort.

Beauclerc walked by the rally and learned what happened to Mr. Wang. “In the past ten years I have seen [Falun Gong practitioners] tirelessly calling for an end to persecution. Every time I walked pass the Chinese Consulate I felt heavy and sad... I hope [Prime Minister Trudeau] will do something to help.” 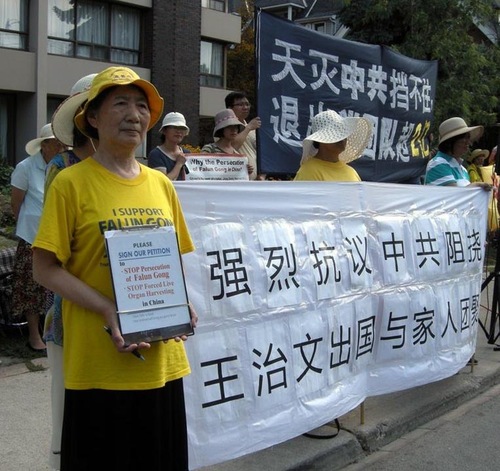 Ms. Zhang Guizhen used to live in Beijing. Because of the persecution, she lost her job and was forced to move from place to place to avoid police harassment or arrest. She escaped to Canada a few years ago. She said that Wang's incident truly showed the evil nature of the Chinese regime. “They claim to allow religious freedom, but in fact there is zero tolerance for true freedom in China. They relentlessly persecute Falun Gong practitioners and many I know in Beijing have suffered unspeakable tortures,” Ms. Zhang said at the rally.

In front of the Chinese Embassy in Ottawa, local practitioners protested what happened in China. While demanding that Mr. Wang to be allowed to leave China to see his daughter, the practitioners also called on the Chinese regime to bring the culprits who started the persecution of Falun Gong to be apprehended and tried in court. 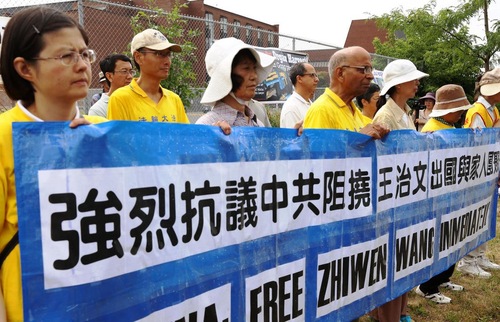 Falun Gong practitioners protested in front of the Chinese Embassy in Ottawa, demanding Mr. Wang to be allowed to leave China to visit his daughter in the U.S. 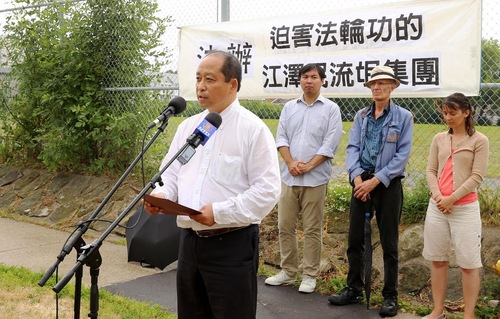 Mr. Li Xun, president of Falun Dafa Association in Canada, condemned Beijing's violation of Mr. Wang's rights. He demanded Beijing to immediately issue Mr. Wang his passport and allow him to leave China to reunite with his family in the U.S. without any interference.

“More than 15 years of imprisonment couldn't take Mr. Wang's faith away from him. The international society has to see how Beijing violates human rights and breaches the laws through the persecution of the kind and innocent Falun Gong practitioners,” said Mr. Li.

Like Mr. Wang and his daughter, Ms. Lu Hongyan has not see her mother for 11 years since she came to Canada. Two months ago she learned that the police took her mother, also a Falun Gong practitioner, away and locked her in a detention center.

“The tortures are brutal, both mentally and physically,” she said.

The Chinese Consulate in Montreal also saw Falun Gong protesters. The practitioners gathered in front of the consulate on August 11 and rallied against Beijing's recent human rights violation. 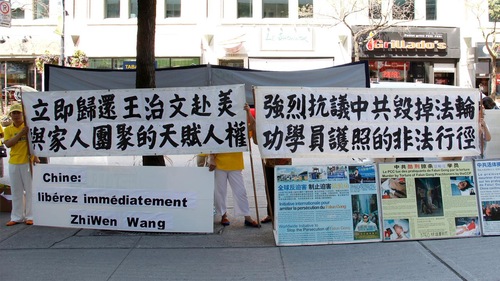 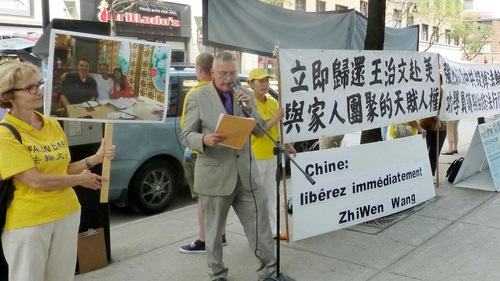 One of the protestors, Mr. Wei, said that it was unacceptable that Beijing revoked Mr. Wang's passport for no reason other than that he was a Falun Gong practitioner. They demanded that Beijing immediately reissue the passport and let Mr. Wang see his daughter. 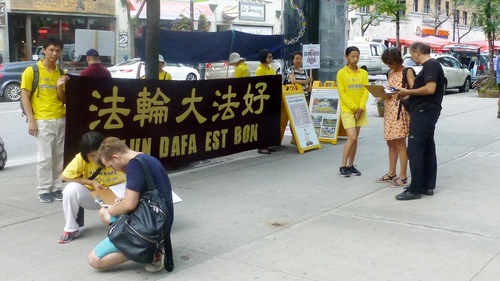 At the rally, the practitioners further exposed the brutality of the persecution. They had passersby sign a petition demanding the Chinese regime to stop harvesting organs from incarcerated practitioners. 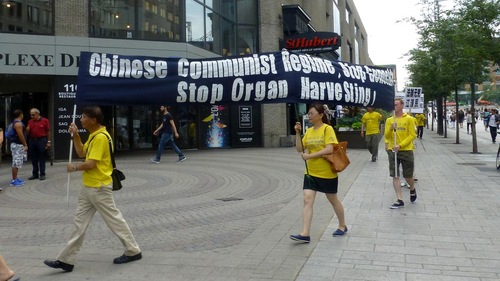 “Seizing Summer Evenings to Reach More People with the Facts”