Vancouver: Voices of Support for Falun Gong After 17 Years of Persecution

(Minghui.org) A candlelight vigil was held in front of the Chinese Consulate in Vancouver Canada on July 19, 2016, to protest the Chinese regime's persecution of Falun Gong, which has continued for 17 years and caused the deaths of more than 4,000 practitioners.

Practitioners rallied the following day near the Vancouver Art Gallery, to raise awareness of the brutality practitioners in China face for refusing to renounce their faith, including being killed for their organs. Speakers at the rally supported practitioners' efforts to resist the persecution, and called upon the Chinese regime to stop the persecution immediately.

In memory of those killed in the persecution in China, Falun Gong practitioners in Vancouver held a candlelight vigil in front of the Chinese Consulate on July 19. 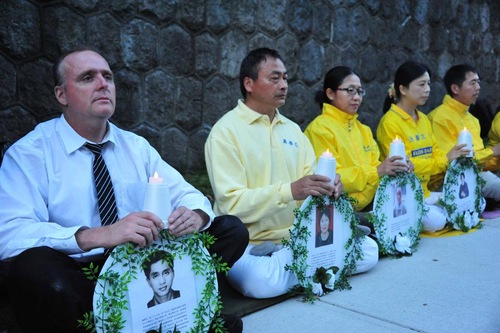 Dennis Watson (first on left) joins Falun Gong practitioners in front of the Chinese Consulate to mourn practitioners tortured to death by the communist regime in China. 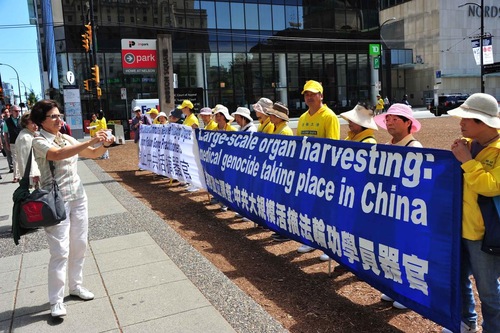 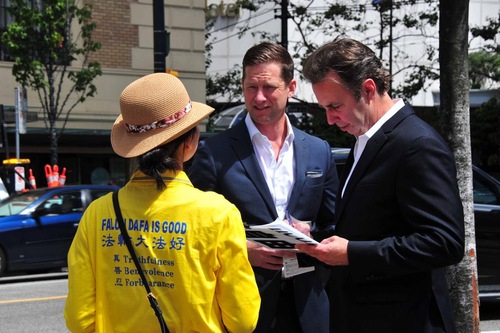 Practitioners rally in downtown Vancouver to expose the brutalities and crimes committed against practitioners by the Chinese regime. 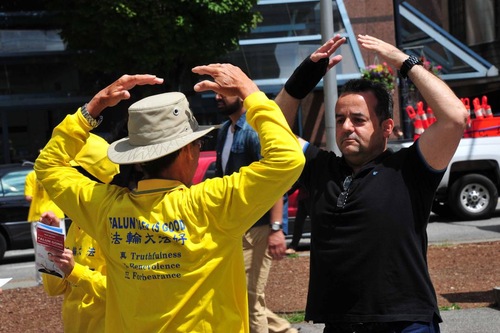 Dennis Watson, who operates a blog called Gangsters Out, joined the practitioners' candlelight vigil on July 19.

Watson learned about the state-sanctioned killing of practitioners from a news report, and wanted to show his support. He also wrote a speech for the rally, in which he said that his heart was with the practitioners, and that no one should be persecuted or incarcerated for their belief. He praised practitioners for having the spirit of great tolerance in resisting the persecution for 17 years.

Former Chinese Judge: Organ harvesting 'should not be tolerated' 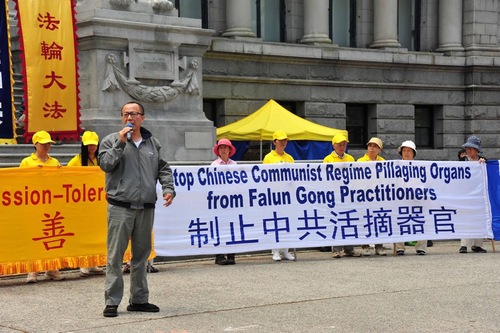 Li Jianfeng, a former judge in China, spoke at the rally and praised practitioners' courage in resisting the persecution.

Li Jianfeng was an intermediate court judge in Fujian, China. Because he refused to carry out the regime's policy to imprison minority groups such as Falun Gong practitioners and Christians, Li was charged with “subversion” and imprisoned for more than ten years.

One of Li's professors used to be a high-level official. He was arrested in 2000 for practicing Falun Gong, and imprisoned for ten years. Li commented, “I don't know any official who was more honest and hardworking than him. Putting a good person like him away goes to show that the Chinese regime is unjust.”

Li identifies with Falun Gong's principles of Truthfulness, Compassion, and Forbearance, and said he can testify that the torture of and harvesting of organs from living practitioners are truly happening in China. He said, “Forced organ harvesting is uncivilized and bloody, and should not be tolerated.” 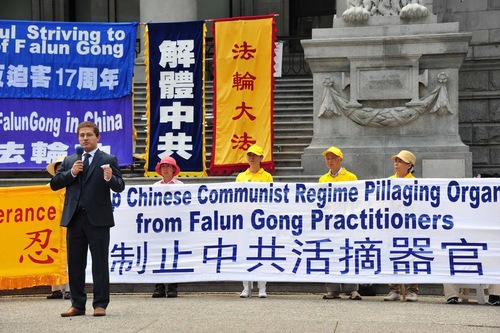 Elias Ishak, an independent candidate for B.C. Legislative Assembly, expressed wholehearted support for Falun Gong at the rally. He said that the Chinese Communist Party does not represent China, and that Falun Gong is the true manifestation of the beauty and sanctity of Chinese culture. He added that the persecution is bound to fail.

“New York Rally and Vigil Call for End to Persecution”