New York Rally and Vigil Call for End to Persecution

(Minghui.org) More than 1,000 Falun Gong practitioners gathered in front of the Consulate General of China in New York on July 20, 2016, to call for an end to the 17 years of persecution by the Chinese Communist Party (CCP). 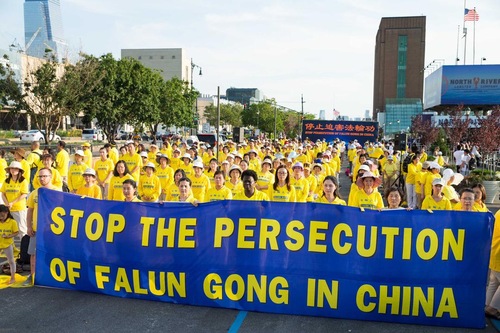 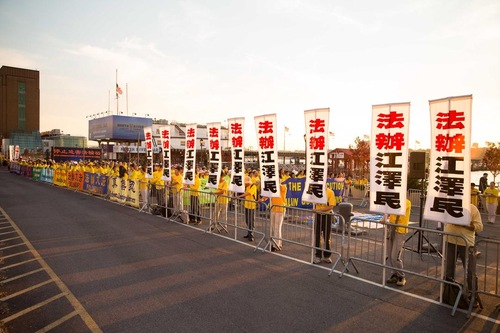 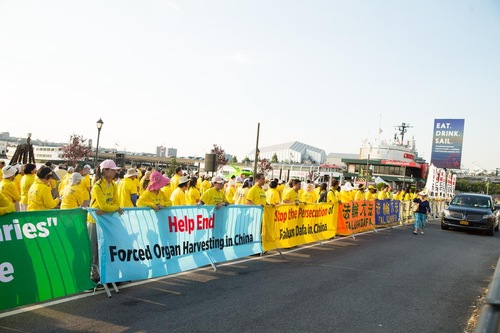 More than 1,000 Falun Gong practitioners held a rally in front of the Consulate General of China in New York.

Ms. Yi Rong, president of the Tuidang Center, gave a speech at the rally. She called the past 17 years of Falun Gong persecution a rampant trampling of humanity, universal values, and five-thousand-years of civilization. She said, “Facing the Chinese Communist Party's brutal persecution, the Falun Gong group stood firmly on the principles of Truthfulness, Compassion, and Forbearance. Practitioners have peacefully and rationally helped 244 million people withdraw from the communist organizations.”

Dr. Li Tianxiao, a political analyst, said during his speech, that instead of yielding, Falun Gong practitioners had exposed the persecution to people in all circles of life using various means around the world. Their banners and activities have been visible in places from Tiananmen Square, to the Chinese embassies and consulates, to every country, and that their seemingly ordinary appeals have shown unprecedented bravery.

Dr. Li stressed that Falun Gong has miraculously displayed a peaceful resistance to the persecution, and behind the miracle was a simple word, faith. He said it was the faith of practitioners that made them able to endure torture, to turn the hardest situation around, and to free hundreds of millions of people from the CCP, and that their strong faith in Truthfulness-Compassion-Forbearance made them invincible.

Dr. Wang Zhiyuan, president of World Organization to Investigate the Persecution of Falun Gong (WOIPFG), spoke at the rally. He said, “The CCP's persecution of Falun Gong is genocide and a crime against humanity under the direction of Jiang Zemin. Organ harvesting from living practitioners, and tortures using psychiatric means, are the most evil crimes in history.” Dr. Wang also pointed out that many of the chief perpetrators have been arrested, one after another, and the same ending is approaching Jiang Zemin, Zeng Qinghong, and Luo Gan. He warned that the countdown to the day of the CCP's collapse has started.

Falun Gong practitioners Mr. Tang Zhiheng, Ms. Li Dianqin, and Mr. Yang Xiaoping recounted the persecution they personally experienced in China. Mr. Tang has been arrested eight times, thrown into a forced labor camp for two years, and prison for four and an half years. Ms. Li was tortured in mental hospitals twice, imprisoned in Masanjia Forced Labor Camp for a year, and in the Women's Prison of Liaoning Province for three years. Mr. Yang was arrested twice for appealing for Falun Gong. He was also imprisoned, and his home was searched by police. 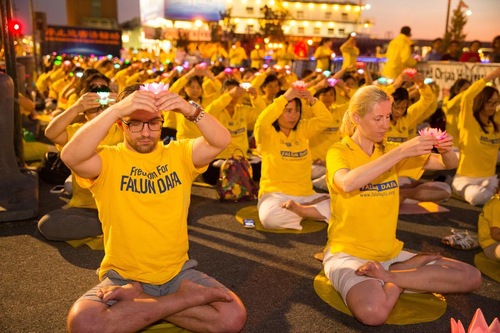 As it turned dark, practitioners in yellow T-shirts lit candles, and sat solemnly along the Hudson River, mourning their fellow practitioners in China who paid with their lives due to the persecution. Their banners stood out amidst the silence, stating, “Falun Dafa Is Good,” “Stop Persecuting Falun Gong,” and “Bring Jiang to Justice.”

“Victims Call for an End to the 17-Year Long Persecution, Gain Strong Support”

“Vancouver: Voices of Support for Falun Gong After 17 Years of Persecution”