(Minghui.org) A 52-year-old Beijing woman was again arrested for her faith in late May this year. The police beat Ms. Yang Jinxiang and burned her with an unknown chemical. Her entire face turned dark and her body was covered with bruises.

Ms. Yang’s latest arrest came six years after she completed a nine-year prison term for refusing to renounce Falun Gong, a spiritual discipline being persecuted by the Chinese communist regime. She wasn’t even allowed to see her mother, who died while she was incarcerated.

Although she was released days later this time around, Ms. Yang couldn’t help but recall what has happened to her since the persecution of Falun Gong began in 1999. Below is her personal account. 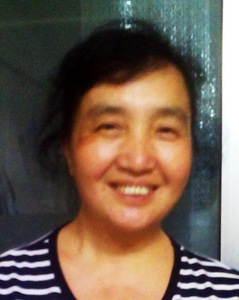 I used to suffer from tuberculosis, sinus infections, kidney and skin disease, menstrual cramps, chronic fatigue, and anxiety. My abdomen was so swollen from the tuberculosis that I looked like I was seven months pregnant. My sinus infection was so bad that the mucus oozed from my eyes. My spotty skin and my illnesses made me look just awful. I often thought at the time that I would be better off dead than alive.

I began the practice of Falun Gong in 1996, and all my ailments were gone in one week. My complexion glowed and I was full of energy. I stopped being hot-tempered. As a result I was no longer at odds with my husband and neighbors. My father said that I had become a completely different person. I thank Teacher and Falun Gong for all that they have given me.

Nine Years in Prison for Keeping My Faith

After the persecution started in July 1999, the police arrested me multiple times and ransacked my home. Most of the time the police never identified themselves or showed any search warrant.

They broke into my house in 2000 and arrested me. They confiscated 40,000 yuan (US$6,000) cash, claiming that I profited from selling Falun Gong books and attempting to use them as evidence that I was a practitioner. The police beat me and shocked me with electric batons, trying to force me to incriminate myself.

Shortly after my release, the police arrested me again in 2001 and tortured me in a small room with the shades down. They tore my clothes, stripped me naked, and shocked me all over, including my nipples, with electric batons. The room smelled of burning flesh.

They stepped on my crotch and whipped my lower body with a belt. They stuck burning cigarettes into my nostrils and used them to scorch my feet until they blistered. They placed a piece of wood on my legs and stood on it until I passed out due to the excruciating pain. They poured cold water on me to revive me and covered my head with a metal bucket. They then struck the bucket with wooden batons for an hour. For a long time after this I had trouble walking, and, to this day, I can't hear well.

Over the nine years I was incarcerated, I was deprived of sleep, was doused with cold water in the winter, had my eyelashes and pubic hair plucked out, and was smacked in the face with shoes. Once I was tied down on a bed for a month straight, until blood came out of my mouth.

I went on a hunger strike to protest the inhumane treatment. The guards had prisoners pry my mouth open and force feed me. Several of my teeth were knocked out, and the food went down my throat with blood and pus from my mouth. When I got weaker, they took me to a hospital. I refused to let them inject me with anything and fought back. I started to bleed where the needle was and splashed all over.

Back in prison, I was denied use of the toilet and was forced to soil my pants. The guards would parade me in front of other prisoners to humiliate me.

In all those nine years I wasn't allow any call or visits. My 80-year-old mother died while I was in prison.

Four police officers dragged me into a car with my hands cuffed behind my back on May 30 this year. At the police station, I kept shouting “Falun Dafa is good!” To silence me, they dripped an unknown chemical on my head. I couldn't open my eyes and almost suffocated. When I wouldn't stop shouting, the police grabbed my head and repeatedly banged it on a desk. They even tied a piece of cloth around my neck.

I tried to scream, and they stuffed a rag in my mouth. They banged my head on the ground and kicked and hit me for two hours until I fainted. They interrogated me after I came to. I shouted “Falun Dafa is good” as they continued to beat me.

Twice the police took me to a hospital to be examined before they put me in a detention center. I wouldn't let them draw blood from me, because I knew they could use the result to match me with potential organ recipients and sell my organs for profit. They covered my mouth and throttled my neck while holding my head down. My arm was covered in blood. The doctors refused to examine me like that, so the police had to take me back.

The detention center authorities would not take me without health exam results and with me shouting. The police took me back to Yongning Police Station. They couldn't stand the awful smell of the chemical they’d poured on me and put me outside. As soon as the sunlight hit me, my face started to burn. They had nowhere to put me and sent me home.

I looked at myself in the mirror and saw that my white jacket had turned black where the chemical spilled. The skin on my face was dark, too, and I was covered in bruises.

“Finally Stepping Out to Talk to People About Falun Gong”