(Minghui.org) After several cities in the State of Indiana celebrated World Falun Dafa Day (held worldwide, every May 13), four more cities in Indiana have issued proclamations to announce May as Falun Dafa Month.

Dennis Buckley, Mayor of Beech Grove near Indianapolis wrote in his proclamation, “On May 13th, millions of people across the Country celebrated World Falun Dafa Day, marking the 24th Anniversary of the introduction of one of the world's most popular meditation and cultivation practices.”

He referred to Falun Dafa as “an advanced exercise and meditation practice of mind, body and spirit that has brought health and well-being to people across the United States.” 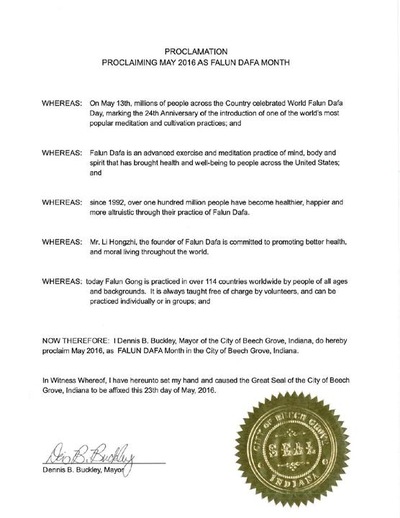 Vincennes, the county seat of Knox County, is located in southwestern Indiana and is the oldest continually inhabited European settlement in the state.

“Falun Dafa practitioners practice the principles of Truthfulness-Compassion-Tolerance and incorporate it into their daily lives, striving to become better people in all environments and situations,” wrote Joe Yochum, Mayor of Vincennes. 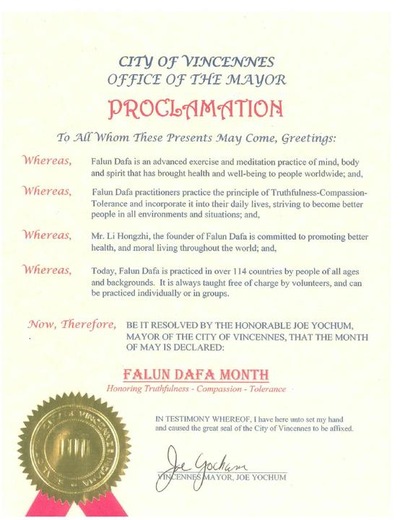 As Mayor of Crown Point, the county seat of Lake County, David Uran issued a proclamation on May 27 to announce May 2016 as Falun Dafa Month.

The proclamation highlighted the benefits that Falun Dafa has brought to both Indiana residents and people across the world. “Mr. Li Hongzhi, the founder of Falun Dafa is committed to promoting better health and moral living throughout the world,” stated the letter. 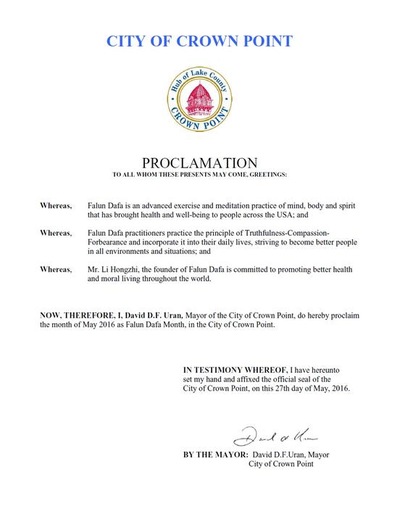 David Uran, Mayor of Crown Point issued a proclamation on May 27 to announce May 2016 as Falun Dafa Month.

Heading east, Bluffton in Wells County also celebrated the special occasion. “Since 1992, over one hundred million people worldwide have become healthier, happier, and more altruistic through their practice of Falun Dafa. And on World Falun Dafa Day, we hope that you will join in recognizing the benefits that this great practice has brought to our society,” wrote Mayor Ted Ellis in his proclamation. 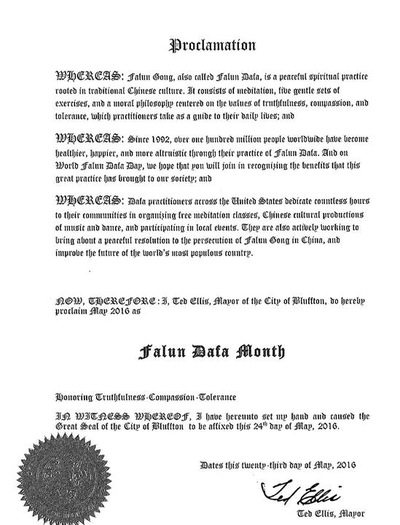 “Dafa practitioners across the United States dedicate countless hours to their communities in organizing free meditation classes, Chinese cultural productions of music and dance, and participating in local events. They are also actively working to bring about a peaceful resolution to the persecution of Falun Gong in China, and improve the future of the world's most populous county,” Mr. Ellis continued in the letter.