(Minghui.org) Falun Gong practitioners conducted their weekly group exercise practice and awareness raising in Leeds, England on May 29, 2016. The peaceful exercises drew the attention of passers-by who stopped to learn more about Falun Gong.

While several practitioners demonstrated the exercises in front of the booth, others talked to the public to introduce the practice. They also exposed the persecution in China and collected signatures against the Chinese Communist Party's (CCP) live organ harvesting of persecuted practitioners. Many passers-by paused to talk and read the informational posters. Many signed the petition after learning about the organ harvesting crimes. Several expressed interest in Falun Gong and asked for information about the local practice site. 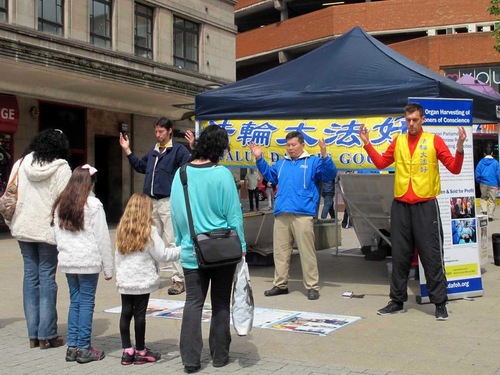 Falun Gong practitioners demonstrate the exercises in Leeds, Britain on May 29, 2016. 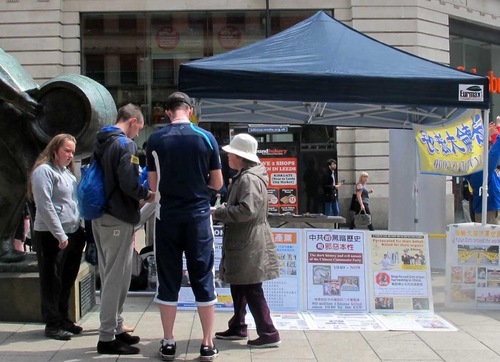 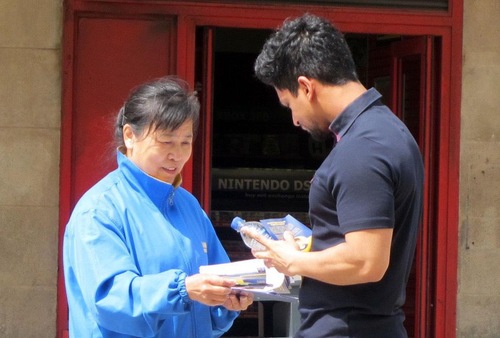 A practitioner introduces Falun Gong and the persecution to a passer-by.

Many local residents have already known about the persecution from practitioners' various events. One woman asked after seeing the flyer, “Is Falun Gong still being persecuted? Have the perpetrators been arrested?” She said she signed a petition during a Zhen-Shan-Ren International Art Exhibition in Leeds a few years ago. She also asked for information about the local practice site.

A businessman doing sales for a Chinese supermarket has contact with many Chinese people in his work. He said, “I like Chinese, as they work hard.” After learning about the persecution in China, he said, “There should be no difference in universal values, regardless of race, ethnicity or color. People should be kind and have freedom of belief. Human rights and life should be more important than money. I think the Communist regime is persecuting the Chinese people.”

A mother brought her young son over to sign. The child asked, while pointing at the practitioners doing the second exercise, “What are they doing?” After learning that they were doing exercises, he asked, “Do these exercises make you calm?” “Yes,” answered a practitioner. The boy's mother said right away, “This practice would suit you. I would be glad if you could calm down.” The boy smiled happily.

A 10-year-old practitioner and another practitioner in his 60s worked together to raise awareness and collect signatures. The elder practitioner generally handed out flyers first and the young practitioner stepped forward to explain further if someone wanted more information. The child would talk about the brutal persecution in China and expose the CCP's live organ harvesting. Many passers-by signed the petition after learning about the brutalities taking place in China.