(Minghui.org) Today's news from China includes incidents of persecution that took place in 13 cities or counties in 8 provinces. According to this report, 14 Falun Gong practitioners were subjected to mistreatment during their detention, at least 9 were illegally arrested, and the whereabouts of 7 are unknown. 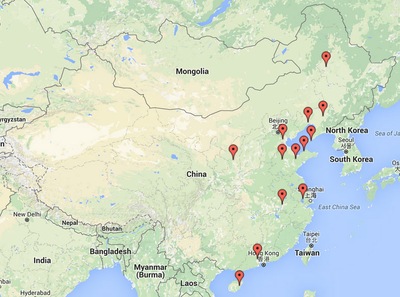 Ms. Wang Xuefei was sentenced to three years in prison.

Ms. Zhang Chenglan was arrested by officers from the Xincheng Police Station, Changqing District, on January 29, 2016. She was detained for seven days in the Jinan City No. 3 Detention Center. The officers ransacked her home and confiscated a computer, a printer, and many Falun Gong informational brochures.

Officers from the Wufengshan Police Station, Changqing District, arrested Ms. Dong Shuqin on February 2, 2016. She was detained for five days. The police officers ransacked her home and confiscated many Falun Gong books, as well as Shen Yun performance and Falun Gong informational DVDs.

Yang Sheng, head of the Yuexiu District 610 Office, showed up at Ms. Zhang's home and harassed her on December 29, 2015.

Five people, including Wu Guili, and residential police officers from the Zhuguangjie Police Station went to Ms. Zhang's home and harassed her on January 13, 2016. They demanded that she sign documents, stating that she would give up Falun Gong.

Mr. Cheng Fuhua was arrested by police officers from the Kunming Street Police Station, Zhongshan District, on June 1, 2015 for telling people about Falun Gong. He is still held in a detention center where he was tortured. It was heard that he was unconscious for an entire day and was unable to walk.

The detention center informed Mr. Cheng's family to come and pick him up at the end of January 2016. The family paid bail and carried Mr. Cheng, who was in critical condition, to the car and took him back home.

Officers from the Kuiwen District 610 Office, and the director of the Liyuan Neighborhood Administration Office, showed up at Mr. Gao Liguang's home on January 29, 2016. They demanded that he sign documents stating that he would refrain from suing Jiang Zemin, the former Chinese dictator. They threatened that if he refused to sign he would be fined 2,000 yuan.

Ms. Wang Jinyu was harassed for suing Jiang Zemin. Her whereabouts are unknown.

Six practitioners from the Baota District were harassed on January 14, 2016.

She refused to open her door. Many police officers, carrying a search warrant, returned in the afternoon and ransacked her home. They confiscated Falun Gong books and a cell phone.

The police officers attempted to take Ms. Wang to a brainwashing center, but she was not accepted because she failed the required physical examination.

The officers have been stationed outside her house since January 22 to assure that she does not leaver her home.

Mr. Yao Fengmin, in his 50s, from Xinjia Village, Xinjia Neighborhood Administration, was reported to police officers for telling people about Falun Gong on January 27, 2016. He was arrested and taken to the Donglai Police Station. Then, he was transferred to the Longkou City Detention Center and held for three days.

Mr. Dong Daoshun and another male practitioner were arrested for distributing Falun Gong informational materials near the Qiqihar City Detention Center at 10 p.m. of February 2, 2016. Officers from the Jianhua Police Department went to Mr. Dong's home and ransacked it.

Ms. Chen Yanmei was arrested in October 2015 for suing Jiang Zemin. Her whereabouts are unknown.

It was reported on February 4, 2016 that Ms. Wang Lingling and five practitioners were arrested for suing Jiang Zemin. Officers from the Zongyang County Police Department ransacked their homes. They are still detained in the Anqing City No. 1 Detention Center.