(Minghui.org) Between September and December of 2015, 6,096 signatures were collected in Langfang, Hebei Province, on criminal report forms against Jiang Zemin, the former leader of the Chinese Communist Party (CCP) who launched the persecution of Falun Gong in 1999.

The criminal report forms read, “The principles of Falun Gong, Truthfulness-Compassion-Forbearance, have benefited tens of thousands of practitioners and their family members. Jiang Zemin not only mobilized propaganda machines to defame Falun Gong, but also gave orders to arrest, detain, and kill practitioners over the past 16 years.”

According to independent investigations from third parties and human rights organizations, at least 60,000 Falun Gong practitioners have been killed for their organs from 2000-2008. David Matas, a renowned Canadian human rights attorney, and David Kilgour, a former Canadian Secretary of State for Asia-Pacific, refer to forced organ harvesting as a, “new form of evil on our planet” in their book Bloody Harvest, the Killing of Falun Gong for Their Organs.

The criminal report forms were submitted to both the Supreme Procuratorate and Supreme Court in China, demanding Jiang be held accountable for his crimes. 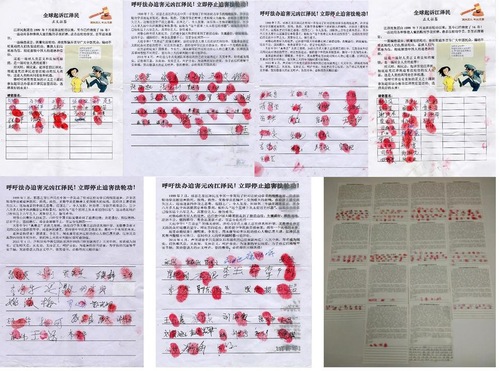 Submitted complaints with signatures and fingerprints. 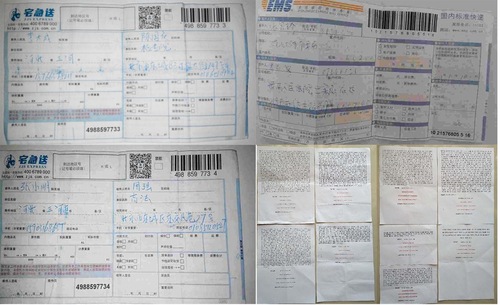 Receipts after the criminal report forms were delivered to the Supreme Procuratorate and Supreme Court.

While collecting signatures, practitioners received warm support from many people. “Of course I will sign this because Jiang has caused so many problems in China,” one person said as he signed a form. “Even if I need to travel to Beijing to sue him, I will go.”

When one practitioner told a crowd on the street why the criminal report form was important, one person came up and said, “Remember that we talked about withdrawing from the CCP organizations? This is one step further—Jiang is the mastermind for suppressing Falun Gong and he should be arrested.” Many people signed the forms after hearing the practitioner.

One pedestrian said to a practitioner he would definitely sign because Jiang had harmed so many people, especially innocent Falun Gong practitioners. When the pedestrian met the practitioner again, he asked for an update on the lawsuit, “Has he [Jiang] been arrested? Was a trial scheduled? I cannot wait!”

“Practitioner Collapses in Court, Forcibly Taken from Hospital to Detention”