(Minghui.org) Falun Dafa practitioners gathered in Hermann Park, one of Houston's most popular public parks, on January 24, 2016, a crisp and sunny winter day.

The practitioners posed for a photo while calling out, “Happy Chinese New Year, Master Li!”

Chinese New Year is around the corner, on February 8, and the group wished to express their heartfelt gratitude to Master Li Hongzhi, the founder of Falun Dafa, for bringing the cultivation practice of Falun Dafa to the public. 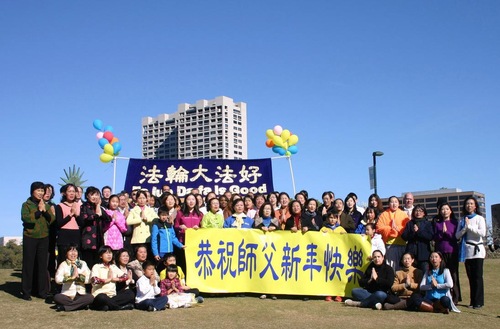 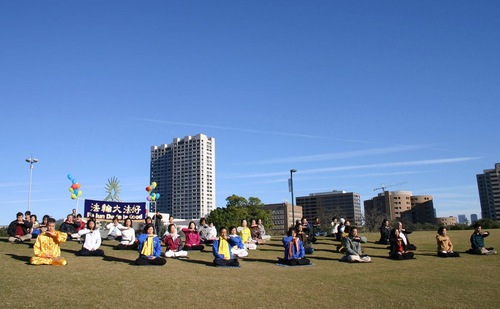 The practitioners did the five Falun Dafa exercises and sang songs composed by Dafa practitioners. Several practitioners shared experiences in their own cultivation with the rest of the group.

Mr. Shweda, who works in logistics management, said, “Today we have come together to wish Master Li a Happy Chinese New Year. This is a special occasion.” Mr. Shweda then talked about how he learned Dafa.

While in Florida in 1998 looking for a martial arts practice to help him gain focus and balance on his job, he found a qigong practice instead – Falun Dafa. He said the peace of mind he experienced from practicing Falun Dafa was far beyond his expectations.

Ms. Gillis said that it was meaningful to wish Master a happy Chinese New Year in such a clear and bright atmosphere. “The energy field here is pure,” she said.

She also said that the Falun Dafa's principles of Truthfulness-Compassion-Forbearance had changed her for the better. The principles fill her heart with compassion and kindness.

“This is something real and concrete. Falun Dafa has changed me from the inside out, and I've been given a new lease on life,” she said.

Many passersby stopped to learn about the exercises, and some expressed concern about the persecution of Falun Dafa in China.

An elderly Chinese man watched the practitioners' activities and stayed for quite a while. He came to the U.S. from China in 2008. He had gone through a lot of pain and hardship in China. He was once targeted for persecution and was not allowed to join the Chinese Communist Party (CCP).

After he came to the U.S., he understood many things after reading uncensored news. He realized that he had been thoroughly brainwashed by the CCP's indoctrination.

He was aware of the global movement to bring Jiang Zemin to justice. He said to a practitioner who volunteers to help people quit the CCP, “The exercises are wonderful and make people healthy and happy.

“But Jiang Zemin, the former head of the Chinese Communist regime, was jealous and initiated the nationwide persecution of Falun Dafa. He wanted to maintain his authority and power, and could not accept that practitioners believe in Mr. Li Hongzhi, but not Jiang.”