(Minghui.org) A family of Falun Gong practitioners live in a small town in Sweden, near the border with Norway, called Arvika. They are well known for their contributions to the community.

Kristina Kleinert is a dancing instructor and choreographer. Her husband Werner Kleinert is a karate instructor who also manages a construction company. They have three beautiful daughters.

Kristina, Werner and their eldest daughter started practicing Falun Gong in 1998. The following year the persecution started in China, and their lives underwent a drastic change. 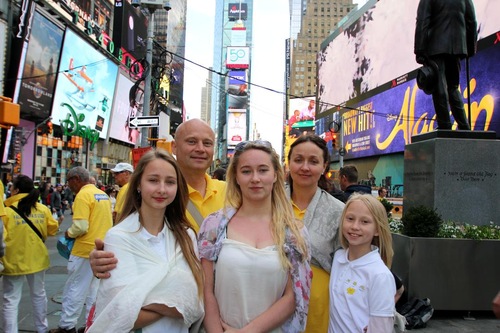 The Kleinert family in New York City's Times Square in May 2015.

In 1998, Werner's brother Rychard called him and said, “Werner, I've found an exciting practice called Falun Gong. You must come to Gothenburg to learn it, because we have been seeking a genuine practice our whole lives.”

Kristina and Werner had not heard of Falun Gong, but they had tried many other forms of meditation. They had both felt for a long time that life must have a more profound meaning and that a spiritual practice would likely unlock the answers.

Werner actually went to India in his youth to search for a cultivation practice. He learned Yoga and Hinduism and got to know some teachings from Buddhism and Daoism. He later practiced martial arts and eventually opened a martial arts school.

But Werner did not immediately do as his brother asked, so Rychard called him again, “Have you gone to Gothenburg?” he asked, “A book titled Zhuan Falun has all the answers we have been seeking. You must go to Gothenburg!”

Two weeks later Rychard traveled to Sweden. He had just spent one week in Gothenburg participating in a free Falun Gong teaching session. He visited Werner and brought an audio recording of a nine-day lecture seminar given in China by the founder of Falun Gong, Master Li Hongzhi. They decided to offer a free nine-day session in Arvika and play the audio recording of Master Li's lectures. About 40 people attended the first lesson, and more than half of them completed the entire nine-day session.

Werner still remembers how he felt the first day of the session. “Listening to Master Li's first lecture I felt energy filled the whole room, to an extent that I almost could not bear,” he said, “My celestial eye opened. I could see scenes in other dimensions. Later I gradually calmed down.”

Werner not only saw scenes in another dimension, but also experienced some significant changes physically and mentally. He knew Falun Gong was what he had been searching for so many years.

“The more I listened to Master Li's teachings, the more I knew this is what I had been seeking. Since then we [his family] have been practicing Falun Gong and mindfully following the principles,” he said.

Werner had been addicted to smoking and liked to drink wine. He had tried many times to quit both habits, but had failed each time. After practicing Falun Gong something changed, and cigarettes tasted different to him.

“I felt nauseated when I put a cigarette into my mouth after practicing Falun Gong. It was a terrible feeling. I completely stopped smoking within a few days,” Werner said.

He similarly got rid of his attachment to drinking. His 20 years of addiction were over. “I got great help from Master Li,” he said.

After listening to the nine-day lectures they felt full of joy and decided to offer many free nine-day teaching sessions to spread the practice to more people. Many people in the area started practicing Falun Gong as a result.

Touring Europe after the Persecution in China Started

Werner and his family were attending a nine-day session in Varmland in July 1999 when the Chinese Communist Party (CCP) launched the persecution of Falun Gong. The news stunned them. The CCP's propaganda about Falun Gong was broadcast in European and other foreign media. The family felt pressure and a strong need to explain the facts about Falun Gong to European people.

Kristina gradually became a coordinator to help spread Falun Gong in Europe. From 1999 to 2001, their family toured many cities to explain the facts.

Explaining the Facts through the Performing Arts

Kristina and another practitioner, a musician named Charlotta Johansson, organized a performance titled “Lotus.” They toured Sweden and performed the show in many schools and theaters.

“We shared the message about Falun Gong and the persecution via dancing, music and poetry,” Kristina recalled.

“Music and dancing can touch people,” she said. “We have such specialty. I like dancing on stage. I think dancing can deliver the message and touch the audience.” 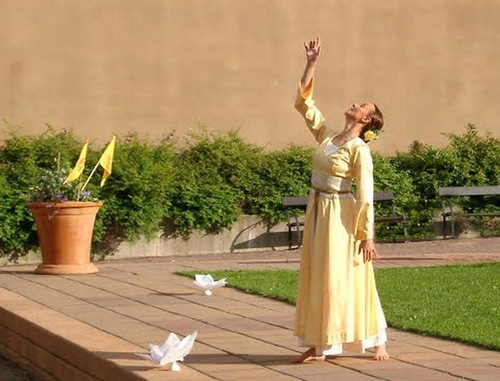 While Kristina planned the many events they held across Europe, her husband helped her with the more concrete tasks of transporting and setting up the equipment they used.

“We are a perfect team,” he said. “We contributed to many meaningful events.”

“Informing the public about Falun Gong was hard right after the persecution,” he said. “We toured many cities. We needed to apply for permits from the police. It rained a lot. We did not have enough hands. It was difficult.”

They had a common wish to stop the persecution of Falun Gong. They knew the persecution was personally initiated by Jiang Zemin, who at that time was head of the Chinese Communist Party (CCP). They went to protest when Jiang visited Lithuania, and called for him to cease the persecution.

“There were many difficulties during that trip,” Werner recalled. “We met with hail and rain. It was very windy with hail and rain when we crossed a bridge near Jiang's hotel. The strong wind seemed to want to keep us from crossing the bridge. We were drenched.”

About 10 years later, their whole family toured Sweden again to raise awareness. This tour also included the Art of Zhen, Shan, Ren (Truth, Compassion, Tolerance) exhibition. Their car was piled full of informational materials. In each of the more than 10 cities they visited they held concerts on the street with dancing, singing, speeches and demonstrations of the Falun Gong exercises. The activities drew the attention of many passersby.

Their eldest daughter Tara, was 11 years old at the time and she danced as part of the tour. Their second daughter Mira, who was 8 years old, looked after the informational materials. Their youngest daughter Indra was just four years old. They met many people who expressed appreciation and support for their efforts.

Werner and Kristina brought their daughters to attend the New York Cultivation Experience Sharing Conference on May 14, 2015. More than 8000 Falun Gong practitioners from over 50 countries participated in a large rally near the United Nations and a parade across 42nd Street from the east side to west side of Manhattan, on May 15. The parade celebrated the 23rd anniversary of Falun Gong's introduction to the public and also called for an end to the CCP's persecution.

“We had not come here together before,” Kristina said. “This time we come together to participate in this grand annual conference along with practitioners from across the world. We wish to display the beauty of Falun Gong, and call for an end to the persecution.”

Their daughters were excited to attend the conference in New York. 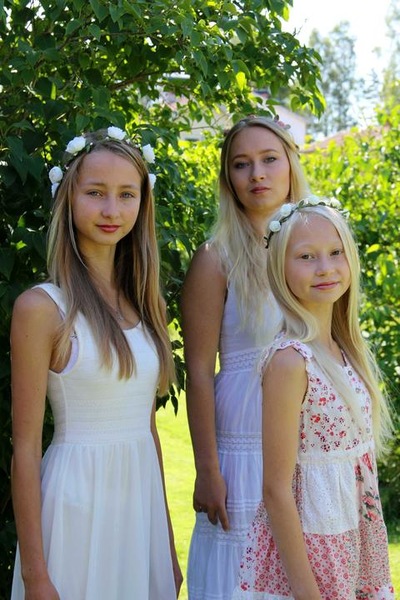 Mira said she practices Falun Gong with her parents. “I understand that practicing is a serious matter with significant meaning,” she said, adding, “I am happy to participate in the events [in New York] and listen to Master Li's teaching.”

Ten-year-old Indra said she began practicing Falun Gong with her parents when she was very young. She said, “I can tolerate others in school and do things carefully. I know to look inward when facing a conflict. I am glad that I am a practitioner.”

“Police Break into Practitioner's Home and Terrify His Family”

““Life Is Beautiful with Falun Dafa””