“Life Is Beautiful with Falun Dafa”

(Minghui.org) “The past year has been beautiful for me since I learned Falun Dafa,” said Pavel Castro. He recently shared his experiences in discovering and practicing Falun Dafa at the 2015 Falun Dafa Experience Sharing Conference in Chicago.

Since learning Falun Dafa less than a year ago, 20-year-old Castro restored his relationship with his parents and younger brothers, was offered a manager position at a restaurant, and decided to go to college.

“Truthfulness, Compassion, Forbearance are three special words with profound meaning. I knew this is what my soul has been looking for,” said Castro. 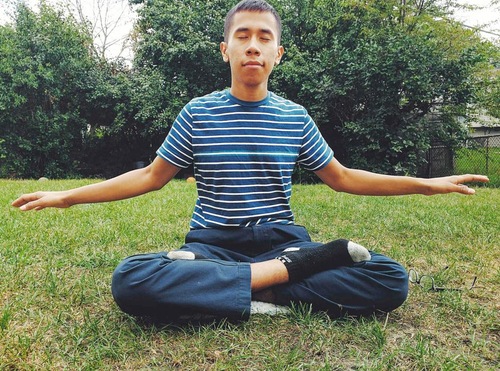 “At first it was really confusing, like, what is this book about? But the more I read, the more it made me feel like a complete person. It really helped me balance my mind,” said Castro. “I finally realized that it is not how I try to understand certain concepts, but rather my mind is gradually elevated by taking in the spiritual principles in the book. So I can understand the true meaning of the book, not just the meaning on the surface.

“So, for the first half of the year into the practice, I read the book as much as possible every day. I set that as a priority and try to let go of my attachments.”

The Beginning of a Good Life

Before he started practicing Falun Dafa, Castro had drug addictions and was jailed a couple of times. He knew it was not the life he wanted, that he wanted to be a good person, but he didn't know what could help him turn things around.

He used to work in a restaurant making burritos with a group of young men with similar problems. “The music was awful and they spoke foul language all day long. “Every day before I went to work, I had to study the Fa and tell myself to keep a peaceful mind,” said Castro. He noticed that the more he read the book, the calmer he became, and the negative environment no longer affected him.

“Of course, I sometimes asked Master for help. I was determined to cultivate my xinxing. I tried to improve my mind and to have a steadier mind. The environment may not have been really healthy, but it really helped me focus my mind.”

He focused on his work. If he made a mistake and others yelled at him, he would stay calm. He became more willing to help others.

His teammates noticed that he'd changed and asked him about it. He told them he practiced Falun Dafa and lent them the book to read.

His boss also noticed and offered to promote him to manager. He decided to go back to school instead.

He entered Elgin Community College and is taking general education classes. “I am determined to do better in school, too,” he said.

Castro lives with his parents and two younger brothers. He used to lock himself in his room playing video games and didn't want to talk to anyone. His father worried about him and often asked what he was up to. He used to avoid his father and quickly sneak back to his room.

After practicing, Castro became kinder and more attentive to his younger brothers. Castro told them what he had done wrong and how to be a good person. He bought a Spanish version Zhuan Falun for his mother, and she began studying it.

His father is happy to see the huge improvements in his son. Now they often chat a while when Castro gets home. “I feel everything in my family is getting better,” said Castro. “We are more closer now and get along better. I try not to live just for myself, but for them, too.”

Connecting with Practitioners, Working to End the Persecution

Castro had been doing the exercises by watching instructional videos online and had yet to meet another Falun Dafa practitioner. When he saw an ad for Shen Yun Performing Arts in Chicago, he bought tickets for his brothers and himself. He said he felt drawn to see the show but did not realize it was hosted by the Falun Dafa Association. At the show, he happened to meet a Falun Dafa practitioner who helped him find the local practice site.

“I think it is our predestined relationship that brought us together,” said Castro of this practitioner and others he has met since. 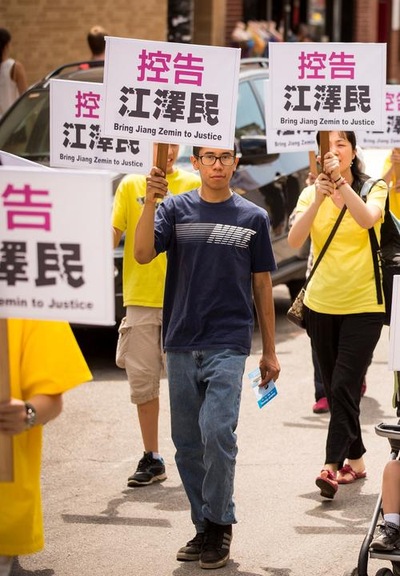 Castro participates in a Falun Dafa march in Chinatown, Chicago 2015.

Castro said he was shocked to learn the details of the persecution in China. “The more I read about Falun Gong practitioners having their organs forcefully harvested in prison, I really wanted to do something about it. I wanted to tell more people about this.

“You would think this stuff is behind us, but it is still happening. Before the practice, I didn’t know anything about China. Now it has made me determined to let people know about this. China has a rich culture, but the Communist Party destroyed the whole system. That is another sad thing about this generation.”

For Castro, though, he says he's found hope in a dark world and that is his cultivation path in Falun Dafa.