(Minghui.org) The recent wave of lawsuits against former Chinese dictator Jiang Zemin has received support in Denmark. Practitioners held a signature drive on Copenhagen City Hall Square on August 29, 2015 to raise awareness about the lawsuits being filed.

Since May 2015 over 165,000 Falun Gong practitioners and their families from Mainland China and throughout the world have filed lawsuits against Jiang for launching and directing the persecution of Falun Gong.

According to Chinese law, any individual with knowledge of a crime can report it to the Chinese Supreme Procuratorate and Court.

Acting on this law, many people in the Asia-Pacific area have signed criminal report forms in the last two months, echoing the lawsuits.

Similar signature campaigns are also taking place in Europe. Many people in Denmark signed criminal report forms to support the movement to bring Jiang to justice. 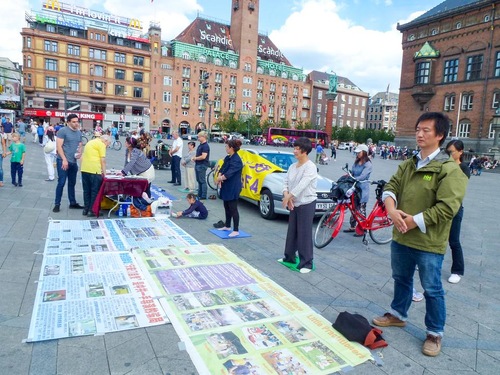 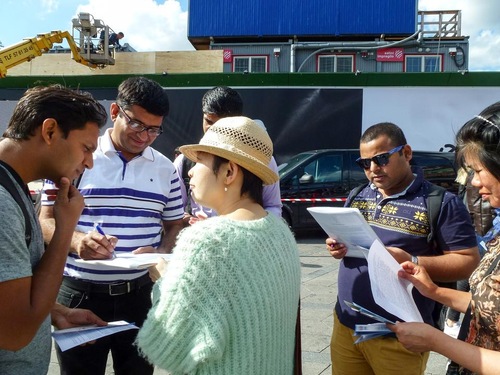 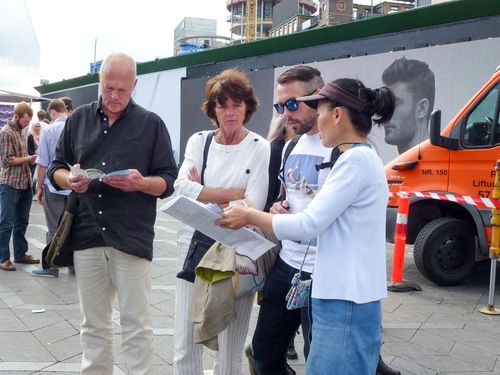 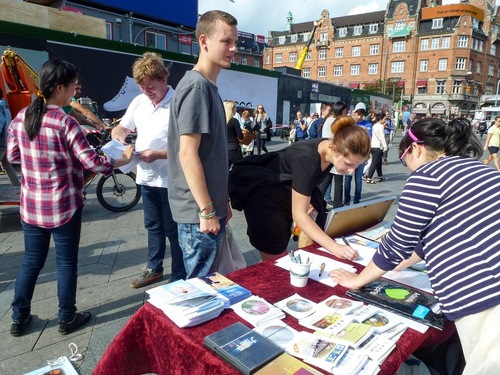 A flight attendant from KLM Airline was shocked upon learning that the Chinese regime sanctions forced organ harvesting from living Falun Gong practitioners. “It's intolerable, and must be stopped,” she said. “I'll post this information on social media and tell all my colleagues about it.”

Two women and their colleagues signed criminal report forms and a petition prepared by DAFOH (Doctors Against Forced Organ Harvesting), calling for an end to the forced organ harvesting from living Falun Gong practitioners. One of them returned after a while. She said she wanted to get more people to support this signature drive. She took Falun Gong informational DVDs and other materials with her.

An older man, whose feet were in pain and had plagued him for years, had been looking for a traditional oriental method to alleviate his pain. He was drawn by the practitioners' peaceful and gentle exercise demonstration. A practitioner told him that Falun Dafa has benefited millions of people physically and mentally with its tenets of Truthfulness-Compassion-Forbearance and the five sets of exercises.

After he learned about Falun Dafa and the persecution that practitioners have been subjected to in China, and the recent tide of filing lawsuits against Jiang Zemin, the man signed the criminal report form to express his support for the lawsuit against Jiang.

“Taking the Initiative to Clarify the Truth When Suing Jiang Zemin”