(Minghui.org) More than 160,000 Falun Gong practitioners and their family members filed criminal complaints against Jiang Zemin, former head of the Chinese Communist Party (CCP), between the end of May and August 27, 2015. They urge the Supreme People's Procuratorate and the Supreme People's Court to bring Jiang to justice for his abuses of power in orchestrating the persecution of Falun Gong in China.

Copies of 7,714 complaints from 8,728 people were submitted to the Minghui website during the week of August 21-27, 2015. The actual number may be higher due to censorship of such information and Internet delivery issues.

In total, copies of 139,774 complaints from 166,579 Falun Gong practitioners and their family members were submitted to the Minghui website between the end of May and August 27, 2015. 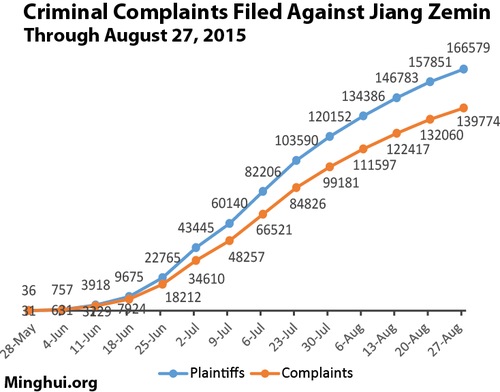 The CCP will hold a military parade on September 3 in Beijing. Police are typically ordered to keep “tight control” everywhere. Streets and lanes are patrolled. Police and 610 Office agents harass petitioners and block the mailing of complainants against Jiang using this excuse.

A post office staffer in Huaibin County, Henan Province disclosed that packages mailed by Falun Gong practitioners to Beijing on August 25 were intercepted in Xinyang, under the excuse of military parade preparation. At least 30 criminal complaints in Huaibin were intercepted. Officers from the Pingdingshan Domestic Security Brigade and 610 Office staffers worked cooperatively to harass local Falun Gong practitioners, and asked them not to petition.

Several express mail service companies in Chenxi County, Huaihua, Henan Province, stated that they received notice from upper level officials asking them not to accept mailings or packages bound to Beijing between August 20 and September 10, 2015. Everyone is asked to show identification at a check-point on a road in Wuji County, Hebei Province, to Tianjin. Falun Gong practitioner Xin Suchen showed her ID, and was escorted to Shijiazhuang Drug Rehabilitation Center, a brainwashing center, and unlawfully detained there. Her family members went there to ask for her release, but were told to come back after the military parade.

The Jiang Zemin faction has brutally persecuted Falun Gong practitioners for 16 years, by incarcerating them in forced labor camps, imprisoning them in jails, torturing them mentally and physically, and killing many by organ harvesting from living practitioners.

Falun Gong practitioner Wang Jian, from Xingwang Township, Zunhua, Hebei Province, was arrested on August 13, 2015. He was released on August 26. Officers from Zunhua Domestic Security Bridge and Xingwang Township Police Substation attempted to have Wang prosecuted and sentenced to prison. Wang explained the facts about Falun Gong and exposed the persecution to staffers from the Zunhua Procuratorate, who came to understand the situation, and did not prosecute Wang. The Zunhua Domestic Security Bridge had to release him unconditionally.

Police officer Du Zhiqiang, from Mengdian Police Substation, Yanshan County, Hebei Province, arrested Falun Gong practitioners Liu Aihua and Liu Guifang. He extorted 2000 yuan ($313) from each family and released them several hours later. Practitioner Liu and others went to the police substation to ask for return of the extorted money on August 11. Officer Du was not there. The practitioners explained the current tide of suing Jiang Zemin to three police officers on site. Du Zhiqiang personally went to return the money to the Falun Gong practitioners at 3:00 p.m.

Practitioner Wang Zaoxiang, from Banbishan Farm, Yangxin County, Huangshi, Hubei Province, was released from Qishanfeng Brainwashing Center on August 26, 2015. Officials from the Politics and Law Committee of Banbishan Farm visited Wang the next day and said they would no longer be involved in Falun Gong issues, and would not allow upper level officials to persecute practitioners from the farm.

“Kassel, Germany: Calling for Support of Lawsuits Against Jiang Zemin and Immediate End to the Persecution”