(Minghui.org) Falun Gong practitioners in Singapore gathered in Hong Lim Park on May 4, 2015, to celebrate the 23rd anniversary of Falun Gong's public introduction. They sent birthday greeting to Master Li Hongzhi, the founder of Falun Gong, and expressed their gratitude for Master Li's compassion and salvation. 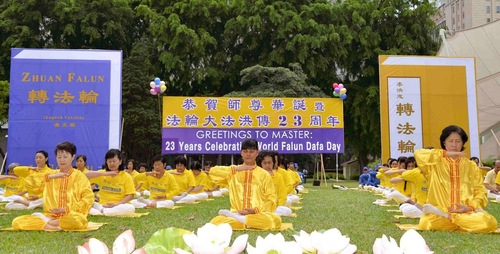 Falun Gong practitioners in Singapore do the exercises as a group. 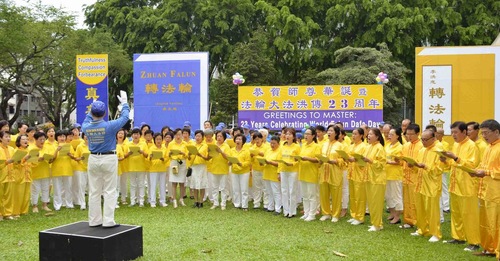 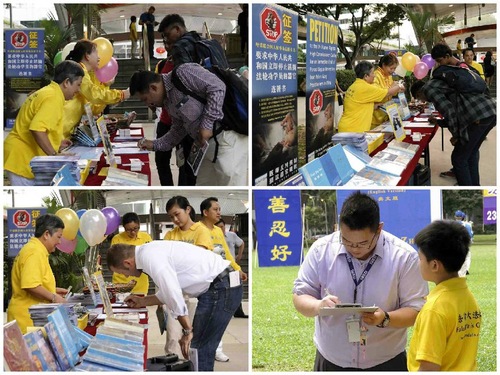 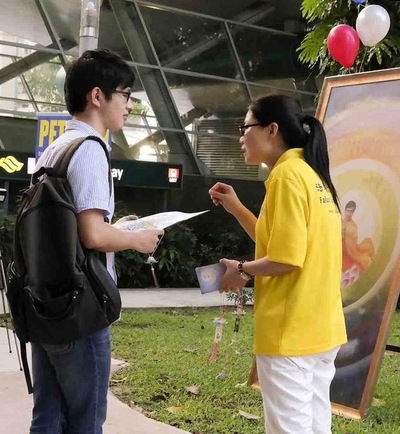 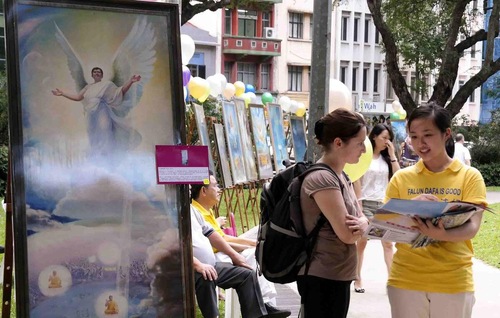 Practitioners talk about Falun Gong at an art exhibit showcasing the essence of the practice and exposing the persecution in China.

During the celebration, practitioners demonstrated the Falun Gong exercises, performed music by the Divine Land Marching Bank, gave choral performances, and held an art exhibit showcasing the practice and exposing the brutal 16-year persecution of the practice in China. Many people stopped to take in the performances and signed a petition to call for an end to the Chinese regime's forced organ harvesting from living Falun Gong practitioners in China.

Practitioners took a group picture after the celebration. With their hands together in a gesture of respect, they said in once voice, “We wish Master a happy birthday!”

A Family of Falun Gong Practitioners

Business owner Peter, his wife Madgeline and their son Theodoric all practice Falun Gong. They took up this wonderful cultivation practice after the persecution was launched in China. 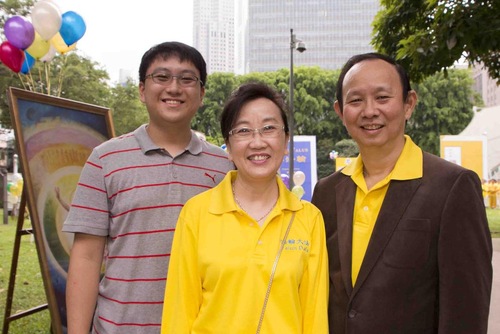 Madgeline recounted that her friend told her about the great health effects of Falun Gong. Despite the Chinese Communist Party's (CCP) slanderous propaganda, she considered the fact that so many people gained good health by practicing Falun Gong. She brought her husband and son to a group exercise site and started learning the exercises.

Peter said that he and his wife didn't believe the CCP's lies. He added, “I learned so much from Zhuan Falun. My whole family has benefited so much from Falun Gong that we have never stopped practicing since we started.” Both Peter and his son had chronicle sinus problems that disappeared after they started practicing Falun Gong. Peter also quit drinking alcohol.

The year 1999 was the hardest for Peter's business. He was deceived by a business partner and lost a great deal of money. Peter said, “I collected all the evidence and planned to bring a lawsuit against him. Fortunately I started learning Falun Dafa, and realized that I might be paying off a debt I owed him in another life. I decided not to sue him. When I completely let go of this loss, my business recovered quickly.”

Peter shared another change brought about by practicing Falun Gong: “Most of the salesmen in my line of work would exaggerate the benefits of their products in order to maximize profit. I used to be like them before I began cultivation. Now I'm following Falun Dafa's principles of Truthfulness, Compassion and Forbearance in my life. I don't exaggerate any more. I do business with honesty.”

The family of three enjoy their harmonious family life, and sincerely thank Master Li from the bottom of their hearts. 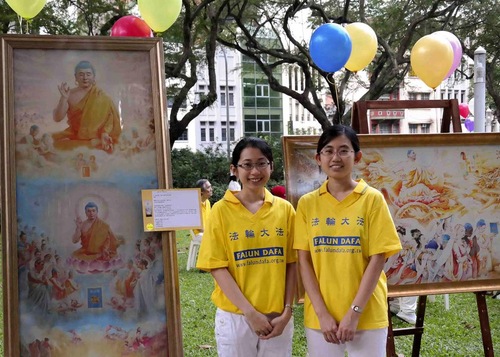 The Chen sisters have been practicing Falun Gong for 17 years.

Both of the sisters said that Falun Dafa has given them great wisdom. They never felt that their schoolwork was hard. Falun Gong helped them find meaning in life. They learned how to properly view all the temptations in society and how to deal with difficulties in life. The older sister said, “My solutions came from Falun Dafa. No matter how hard it was and how anxious I was, I was eventually able to overcome all difficulties with Master's care. I learned so much from Dafa! I really want to thank Master for his care and salvation!”

A Family of Four Generations Benefits from Dafa

Four generations of Ms. Zhang's family practice Falun Gong. Ms. Zhang said, “I have personally experienced and witnessed Falun Dafa's power. Our illnesses were cured. We got rid of our bad habits. I used to have a bad temper and often verbally abused people. I used to be intolerant of others. I knew that Falun Dafa taught students not to fight back when wronged. I was afraid that I wouldn't do well in this regard. This was the reason that I didn't start practicing for years. It's such a pity. After I became determined to cultivate myself, the power of Dafa manifested in me. My gynecological diseases, liver disease, chest pain, leg pain, and hemorrhoids were all gone. I felt so light.”

Ms. Zhang added, “Cultivation in Dafa taught me to treat others with compassion. It was hard to do at the beginning. I had to hold back my tears when trying to practice tolerance. I would study the Fa to calm myself down. I gradually learned to be tolerant. My kids used to not listen to me. I was so angry that I stomped my feet. After I cultivated myself, I rarely lost my temper at my kids. But they suddenly became very good and polite.”

Ms. Zhang feels deeply indebted to Master. She said, “Master is so compassionate! Every time I read the Fa, I find myself weeping. Master has done so much and suffered so much for us! He has saved so many people! No words can describe his profound grace. I have to cultivate myself diligently, and offer salvation to more sentient beings. I hope that everyone I know will be saved!”