(Minghui.org) “Human Harvest: China's Organ Trafficking,” a 25-minute documentary on China's practice of killing prisoners of conscience for their organs, was aired during primetime on April 7 on SBS One's “Dateline,” the longest-running international current affairs program in Australia.

The award-winning documentary put a harsh spotlight on the practice of killing on demand, something that Party officials go to great lengths to cover up and deny. Multiple Australian media agencies published follow-up stories the next day. 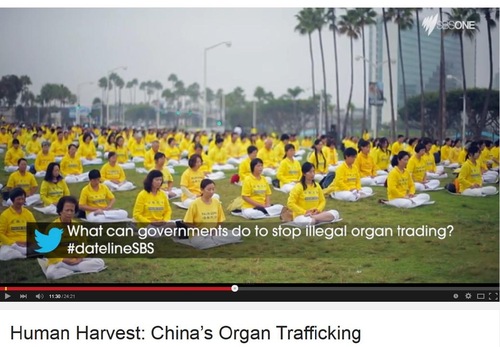 “Human Harvest: China's Organ Trafficking,” broadcast on a national public television network in Australia, posed the question: “What can governments do to stop illegal organ trading?”

Organ traffic is a billion-dollar business for the communist regime's army and military hospitals, according to the documentary. In a country without a tradition of donating organs, more than 10,000 transplant operations have taken place every year of the past decade.

“Somebody's being killed for the organs... There's no other way to explain what's happening," said David Matas, a human right lawyer from Canada. He explained that the number of death row prisoners didn't come close to providing enough organs to explain the huge number of transplants and that living prisoners of conscience make up for the shortfall, with Falun Gong practitioners the key targets.

Their first book, Bloody Harvest, published in 2009, presented 53 pieces of evidence collected during their research. In State Organs: Transplant Abuse in China, published in July 2012, they edited articles from seven physicians on the subject. 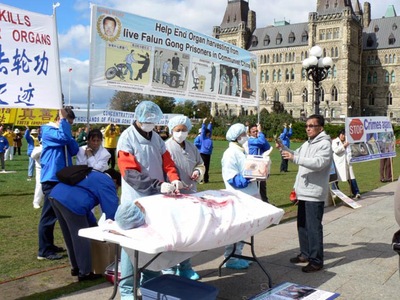 Falun Gong practitioners focus attention on the crime of killing for organs by staging a reenactment on the grounds of Parliament in Ottawa, Canada.

The documentary aired on April 7, and includes accounts of witnesses, a patient who traveled to China for a kidney, and doctors.

Leon Lee, producer and director of the documentary, first heard about the organ harvesting scandal in 2006. He found it hard to believe until he studied the evidence and realized that it was true, giving him the idea to make a documentary about it.

“I am glad to see the response from the viewers in Australia.” said Lee, referring to the tweets audience members posted. “Learning about these atrocities, something I believe to be unprecedented in human history, people will talk to their friends and relatives and make efforts to stop them.”

Mr. Lee wasn't alone in doubting the stories of forced organ harvesting at first. Peter Westmore, president of the National Civic Council, a grassroots political organization in Australia, said that, despite his initial disbelief that the Chinese regime would harvest organs from prisoners of conscience (the majority of whom are Falun Gong practitioners), he is among the many who, over the years, became convinced of the existence of the crime.

As Mr. Westmore recalled, if the accusation of organ harvesting was true, then, “There had to be a big transplant industry in China.” His curiosity stirred, he began to do a little investigation on his own.

His own online research came up with consistent information: “There were English websites aimed at English speakers and other foreigners advertising transplants at China's hospitals. They claimed that the transplants would be done immediately, and if anything went wrong with the transplant, then another would be offered within two weeks!”

“Sydney Morning Herald,” TV Channel 9, News.Com.Au, and Daily Mail were among the media that carried the news the next day.

““Please Give Me a Talisman””