(Minghui.org) Hamburg, the second largest city in Germany, is a sister city of Shanghai. But, their attitudes towards Falun Gong are direct opposites. One persecutes Falun Gong, and the other seeks the release of Falun Gong detainees.

Ms. Ye Julan, 67, former radio station engineer, was arrested by Shanghai police on December 9, 2014. Her daughter and son-in-law who live in Hamburg reached out to city officials for help. Katharina Fegebank, Chair of the Green-Alternative List (GAL) in Hamburg, wrote letters to the Chinese Consulate and the city's Office of International Affairs, calling for Ms. Ye's release. 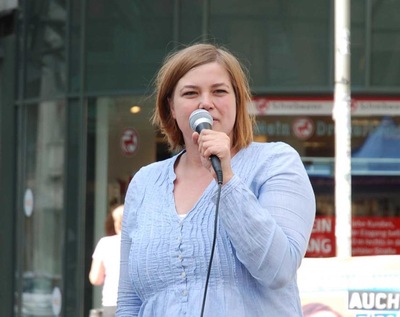 Katharina Fegebank, chair of the Green-Alternative List (GAL) in Hamburg

Fegebank wrote in her letter to Yang Huiqun, Consul General of Chinese Consulate in Hamburg, “I am contacting you because I would like you to pay attention to the arrest of Ms. Julan Ye in Shanghai on December 9, 2014… According to her family, there was no reason for her arrest. I therefore ask you to investigate this matter. Since Ms. Ye has relatives in Hamburg, your help will improve the relationship between Hamburg and Shanghai.” 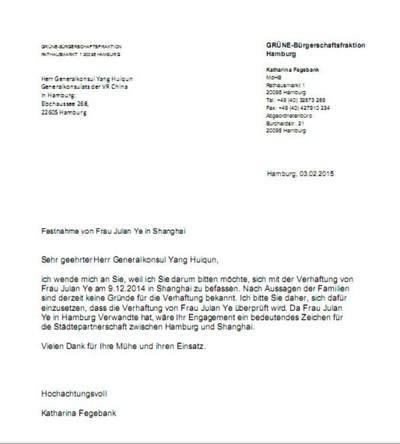 In the letter to Wolfgang Schmidt at the Hamburg International Affairs Office, Fegebank wrote, “Mr. Zhou Yake informed me on January 31, 2015, that his mother-in-law, Ms. Ye Julan was arrested in Shanghai on December 9, 2014. According to Mr. Zhou, officials arrested Ms. Ye without providing a reason. But it could be related to her practice of Falun Gong. Mr. Zhou lives in Hamburg and he asks for help. Please help and set free Ms. Ye because Hamburg and Shanghai are sister cities.” 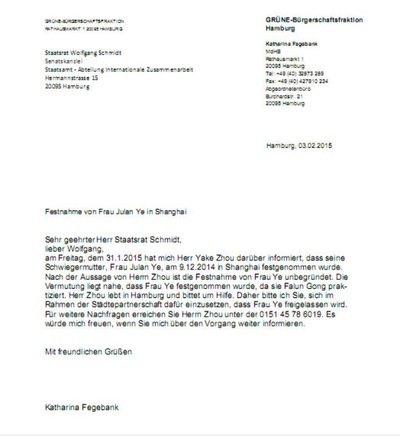 Ms. Ye was arrested by the Changfeng Police Station officers at home on December 9, 2014. She was then kept at the Putuo District Detention Center. Her family received an arrest warrant from the Putuo District Procuratorate on January 9, claiming Ms. Ye had been involved in Falun Gong activities and is charged with “impeding law enforcement.”

Ms. Ye's husband requested to visit her on three separate occasions, all of which were denied. Her daughter, Ye Xiaojun, and her husband phoned both the procuratorate and police stations, but none of them are willing to help.

“Falun Gong is a belief that teaches one to become a better person. How could this be wrong or 'sabotaging law enforcement'? Ye Xiaojun said she did not understand why her mother was arrested, “I have not been provided explanations to any of these questions.”