(Minghui.org) While experiencing the culture and beauty of Paris, many Chinese tourists have unexpectedly encountered a lesson in their own nation's history.

Over the past several years, local Falun Gong practitioners have held a booth at the Eiffel Tower and other tourists attractions every day, telling Chinese tourists about the CCP's brutal history, particularly the ongoing persecution of Falun Gong, and convincing them to take a stance against the injustice by withdrawing their memberships in the Party. 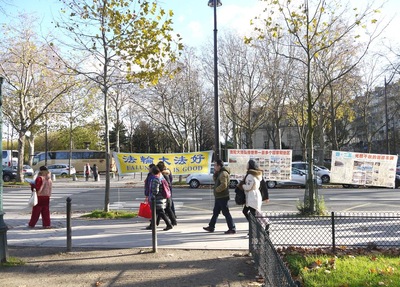 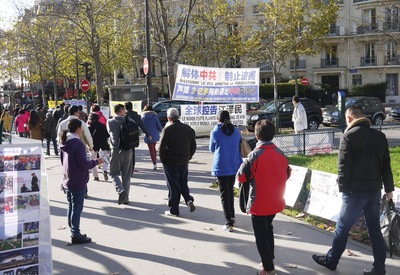 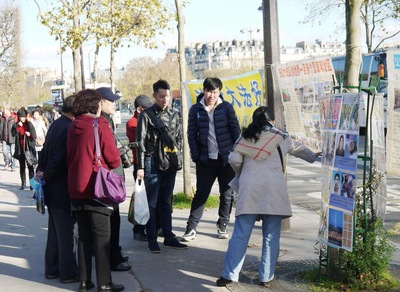 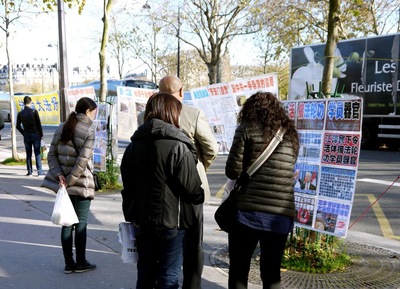 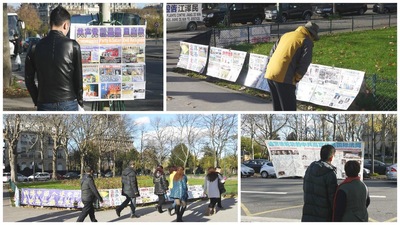 Some Chinese people asked how much money practitioners make by doing this every day. Practitioner Ms. Jun explained that no one is paying them--they are all volunteers.

“We just want to tell you about the crimes that the Party has committed, and help you to quit the Party. This is for your own good, and you will have a bright future, if you take a stance against its crimes.”

“This is a message from heaven,” a young man once said to Ms. Jun. “You must have been sent by God. I believe what you've said is true.”

Another time, a tourist said to Ms. Jun that he did not believe the allegations of state-sanctioned organ harvesting from Falun Gong practitioners. Another tourist said to the whole group, “The persecution is really true. One of my neighbors practiced Falun Gong. He was arrested a few years ago. He was beaten to death in jail a few days after the arrest.” A third person pointed at a practitioner's picture on the display board and said: “I knew her, Ms. Zhao Qin, a college teacher in Beijing. She was beaten to death.”

All horrified by the brutality of the persecution, the entire tourist group decided to quit the Party.

Some people told Ms. Jun that they heard about the movement of quitting the Party in China, and were glad to have a chance here in Paris to finally publish their declarations of withdrawal. They encourage other group members to seize this chance, too.